The Halloween Horrors project this year has brought me back through much of my collection-seeking out horror films to view for the first time, or revisit with a fresh opinion given how long I've been seeking these films out.  Well, I realized that I haven't seen so many of them that some really respected films have dropped off the radar, and that includes a Gothic shocker set by Riccardo Freda, THE HORRIBLE DR. HICHCOCK and THE GHOST.

Now, this is a double shame as I really enjoy the Gothic horrors of Italy-so it was time to put the situation right. While I am probably more prone to enjoy a splatter laced kung fu driven zombie film, I can easily call myself a fan of the slower school of Euroshocks.  And now I realize that I need to watch a lot of them again, because both of these are amongst the best I can recall. I'd take Hichcock over The Whip and the Body right now, so I think I should do some research in to that opinion!

First up, Number 12--THE HORRIBLE DR. HICHCOCK.  This one is a note perfect shocker that is one of the most unsavory portraits of medical madness I've seen! The Third Eye and Buio Omega may not dress up in period clothing-but this is definitely one that slides right in to that nasty class of necrophilia nastiness. To think that audiences saw this AND The Awful Dr. Orlof in a double bill is brainwrecking for me.  My parents would have been in their early teens at the time!! 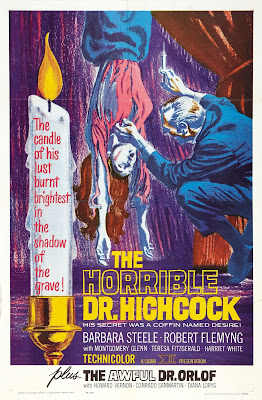 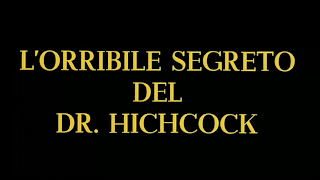 Dr. Hichcock (Robert Flemying) starts us off strong, popping open a coffin and touching the body in about as suggestive and lurid a way as possible, given the year it was made-and we know he is definitely not right in the head from beginning of this sordid tale. The doctor is a renowned surgeon, famous for a special anesthetic that slows a patients heart down and allows surgery to take place for a longer period of time.  BANG...we know where this is going. But things get even stranger as we meet his beautiful wife Margherita (Maria Teresa Vianello)--now, I'm thinking that he is drugging her to get his kicks. Not so. The pair are playing at necrophilia, an unspoken plot point that is put across brilliantly by one smile from Vianello. But as in all things dangerous and sexual, everything goes sideways and Margherita dies.  Hichcock is destroyed, and leaves his villa to the awesomely creepy maid, Martha (Harriet Medin). 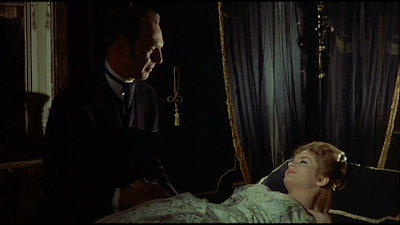 Of course, the Doctor returns years later with his new bride, the also beautiful Cynthia (Barbara Steele)-and begins to unwind and unravel in spectacular fashion. His surgical career is sliding away and his sanity is in hot pursuit as the ghost of his dead wife haunts him, and Cynthia, in every way possible.  Add in the insta-love of a dashing young doctor and Cynthia is either going to be drugged and violated or destroyed by the ghosts of Hichcock's past! 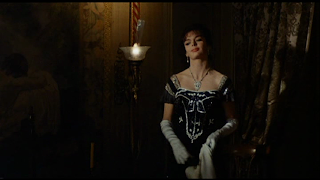 Riccardo Freda pulls out all the stops in the story obviously, but The Horrible Dr. Hichcock is a beautifully rendered nightmare for Cynthia, climaxing early (for me) with some creepy sound design meshing with an excellent portrayal of a woman waking up to find herself in a crypt, IN A COFFIN WITH HER NAME ON IT!  During a silent bit I realized that the sound I was hearing was my own breath being sucked in and held... for a month of horror films, this was a truly terrifying moment that will stick with me. 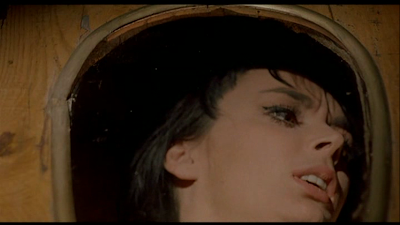 Flemyng manages to balance the aristocratic veneer of the doctor and the psychotic breakdowns he experiences with equal gusto. you want to slap him silly at first, and then you want to get as far away from him as possible.  This is essential horror cinema for fans of Italian exploitation. While it may have many of the trappings of the gothic genre, it is a dirty hearted dead letter passed from the imagination and skillful hands of Riccardo Freda that managed to shock me 48 years after it was released.  Special attention should be given to the amazing score by Roman Vlad, I actually put the film on in the background all weekend, not so much to watch (because nothing says cleaning on Sunday morning like a tale of medical mayhem), but simply to enjoy the soundtrack!
If you have seen it, give it another viewing--and if you haven't, don't be like I was. Go and grab it now. 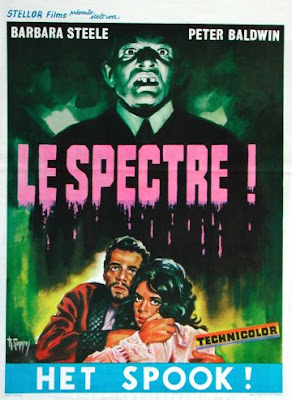 Now that Freda had me entranced by his tale of mayhem, I had to go deeper into the pit-at least I'd hoped to-with THE GHOST (aka Halloween Horror 13).  While you do get a returning Barbara Steele as a very different character, a returning Harriet Medin (I love this woman's performance in these films) and a Dr. Hichcock it is not all that similar to the earlier film.  And while it may not be quite as good, I found the conclusion of this one to be extremely satisfying.  Also, Barbara Steele gets more to do and vamps it up in the best way...if you were nervous about what Hichcock would do to you with his secret, you'll be more afraid of crossing this Gothic schemer.  I've seen The Ghost listed as a "sequel" to The Horrible Dr. Hichcock, but it isn't. You have a big house, a doctor and Barbara Steele walking the dark side.  The two films are perfect companions, almost like the use of Steele as Good Girl / Bad Girl in other films. 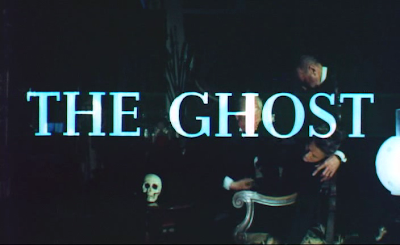 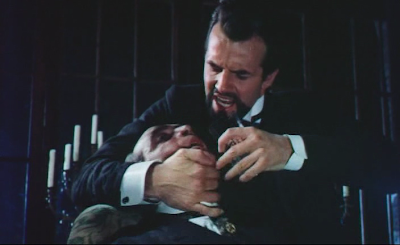 After we meet all our players it becomes obvious that the crippled Dr. Hichcock (Elio Jotta) is ready to end it all. He has a beautiful wife that is out for his money (and getting action on the side from his young physician of course)--and frankly, not a lot of options considering he has to take poison and get antidotes from said young lover.  This recalls the earlier film neatly and twists it around, also giving the viewer the "oh yeah, they are gonna kill him dead" tip off.  They do.  And then it all goes to hell. 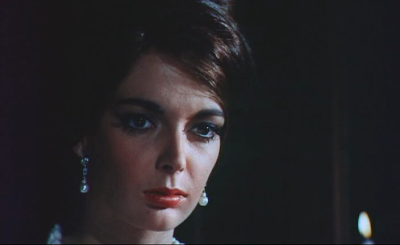 The money is hidden, a spectral Hichcock appears, Barbara Steele is going nuts and swinging between tormented lady and queen bee bitch that would hurl over her dead husband in his coffin to get at his money.  And of course, there is something just not right about that housekeeper---or the specter of doooooom.  As the romance of young lust and money mongering fades, that straight edge razor that once slipped across the throat of her crippled husband begins to look better and better to Margaret. 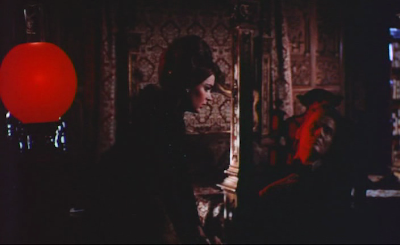 The pace of The Ghost is different from Hichcock, it feels more typical of the genre in some ways-but plays a nice double twist finale out (I won't spoil it) to perfection.  It feels more like a thriller than a horror film in some ways, but Freda's directorial vision keeps the creeps coming whenever possible.  Sure, it isn't a nasty tale of necrophilia, but Barbara Steele stands out here, getting to really show her beauty and skill as an actress to give the viewer a fully fleshed out villainous woman in her portrayal of Margaret.  While Bava may have given her some more iconic images to burn our brains with, Freda made her a force in this film.  When she goes wild with a straight razor in the last third of the film it is a fantastic bit of inspired carnage and may well have inspired a young Dario Argento (or at least placed the image in his mind) that he would use in Tenebre.  I did find it interesting that this character is named Margaret, while the original kinkier wife of the original Dr. Hichcock was Margherita by the way.  It appears that Ernesto Gastaldi, easily one of the most important writers in Italian Horror history, only wrote the first film.  Perhaps that was the shift from all out shock to a more "Secrets of Sinister House of Love" in the second film.  Regardless, both films work great and play with slightly different conventions in the same genre. 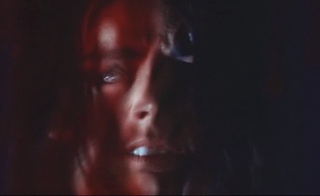 Dust off a Halloween skull and turn off the lights, because you can make a perfect night of Freda dementia and delight with this pair of Gothic Groovy Ghoulies.
Posted by David A. Zuzelo at Tuesday, October 19, 2010

I totally agree. Freda made very few gothic horror movies but the ones he did make are superb. He deserves to be much better known among horror fans.