Bibliotheque Terrors! Brides of the Impaler

What would October be without horror novels to supplement my Halloween Horrors??  And who better to turn to than Edward Lee, the ultimate in BUZZ YOUR FUCKING HEAD OFF horror?  Nobody.  Add in that he is taking on the Vampires in his novel Brides of the Impaler and it just screams "Jab my prose through your eyelids Mr. Z."  So I did...and what I found was pretty damn great, both as a novel and as a European Trash Cinema drinking game!! 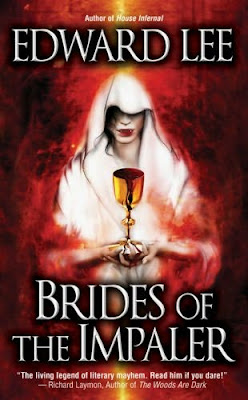 With a prologue we meet a professor and his hot younger assistant doing a little digging around the grave of the "true" Dracula.  Lee right off the bat shows that he is going to bring his violent aesthetic to that old fangnut of horror as the young lady lustily brings up the details of the legendary impalers activities...and then BLAM, he drops a wall on the pair, unearthing something mysterious.  Trapped, our archeologist watches as some mysterious figures zip away with something that may be important.  Oh, it is...
Christina Nichols and her step sister Britt bring us to present day as a pair of ladies living the high life in New York City. They are married to a pair of rich lawyers and have it all.  They earned this karmic swing thanks to a horrific shared past where they were drugged and raped by their stepparents--so no wonder Christina has reason to doubt herself as a strange influence comes over her.  She is a designer of costume kewpies, and has hit the big time with gothic horror dolls (that would fall right out of the Infernal series if you ask me)--and her latest creation, The Noxious Nun, may be closer than she thinks.  Their husbands try to be understanding as the girls become embroiled in odd behavior that has them both confused...but as lawyers they get to be wonderfully shifty throughout.  The police?  Well, they have their hands full too.
Detective Howard Vernon is trying to solve a series of mysterious murders committed under strange circumstances...impaling to put a fine point on it!  But the victims are impaled on Christmas Tree stands and with old broom handles...
The nun is there...she is very real, and nobody is safe from having not just their mind ripped up, but their flesh will be torn, sucked, shredded, slurped and devoured along the way.
Ah, Ed Lee, I love your work sir.

Lee has taken the time to step away from the crowd and create a really hypersexualized and violent vampire lore here that casts aside the "Dracula" stuff and replaces it with a lot of elements that you would find in a weird late night Eurotrash horror flick.  I highly doubt vampire fans will be left wanting by the wanton ways of the vicious Kanesae and her homeless squadron of vampire whores, never mind the urban gothic vision of Lee that eschews all the stuff you would expect from an NYC setting, instead he builds a world as grungy and unsettling as any Backwoods Bighead excursion he has forged before.  This is the books strongest suit in my opinion.  While you may feel like logic gets cloudy on occasion, it is obvious to me that this is possibly the most atmospheric horror novel Lee has written.

Now, I have to do a secondary review, because I was greatly thrilled to see that Edward Lee thanks Jess Franco, Amando De Ossorio, Paul Naschy and Jean Rollin right up front.  Any reader of this blog knows how high my regard is for that line up!  The book is riddled with Eurotrash stars and references that kept me turning the page. Howard Vernon is simple, but having a woman named Laura having sex with a guy named Gemser is very cool.  Better yet, husbands Paul Nasher ("he was stocky, broad shouldered--like a power lifter") and Jess Franklin (a heavy smoker with "unruly brown hair and pointy goatee that seemed perpetually in need of a trim") are even more fun.  My favorite though?  Cristina and her sister Britt. Cristina is THE PRINCESS OF EROTICISM if you like that title of A Virgin Among The Living Dead.  And one of the hottest starlets of that one? Britt Nichols.  Cristina goes on the voyage here and gets the erotic treatment along the way of course!!
Sadly, no scissors scene Franco fans...
Very clever indeed, and there are many many more!  I had to chuckle at CINZIA as well, seeing as I just did a Casual (un)dress Friday on that lady as well.
So, a really solid horror novel and a Eurotrash Fetish Pole.  Yeah, you need it.  While at times I was thinking that this was definitely Leisure Lee, a bit more mellow it also speaks volumes about Edward Lee.
This is mellow when a homeless woman is performing fellatio on a man that has been impaled ass to mouth as he dies.
Ed Lee? Hell yeah.
Posted by David A. Zuzelo at Wednesday, October 20, 2010

I read this a few months ago and LOVED it! I was very proud of myself for recognizing the Laura- Gemsur reference....among the many others sprinkled througout.

with Laymon gone I can say for sure that Lee is my favorite author now. My only complaint is that the Leisure editions seems so toned down. I know from his forum that he is choosing to do that himself- to appeal to a broader market (not being pressured by the publisher) so I cant really complain.

Edward Lee is the Real Deal no doubt.

Dammit I did miss the Cristina/Britt reference though. thanks for letting me in on that.

There were so many of them it was mind boggling, not to mention a JOHN ROLLIN (who played a weary old cop that gets killed in Zombie Lake) as well. I've looked through reviews and not seen one mention of this stuff, which is unfortunate.

We gotta get together Billy, I'm crawling back on to the face of the earth this month. School and all that...way more hectic than I expected. Hmm...5 years ago when we first had my boy I thought I'd have TONS of time to write.
Wrong.