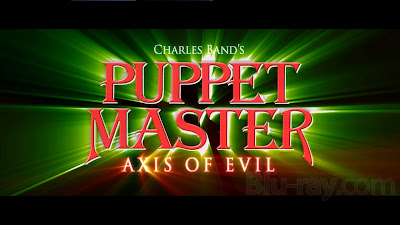 I love Puppet Master as a series. They aren't all GREAT, but there are some real gems in there, and one of my favorites is RIGHT HERE in last years Halloween Horrors!  Ah, Toulon's Revenge! And I was excited to see that era being revisited, all this time later, in PUPPET MASTER - AXIS OF EVIL.  I was also thrilled to see it on Blu-Ray!!
And then, I watched the film. Now, to call it terrible would be an overstatement. So, once we get past the plot, we can  look at the good parts, even if it is hard to focus through the rather boring sub 90 minute runtime. 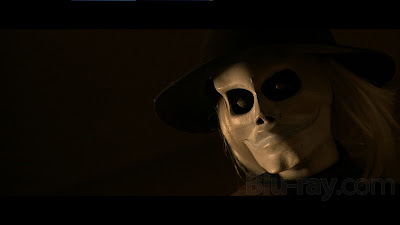 Briefly, we get a rehash of the death of Andre Toulon-adding in a character that sees the nazis leaving after he commits suicide to avoid the secret of his puppets being taken.  Then...well, we learn A LOT about that character.  And he fatefully bumbles across one of the same Nazis that infiltrates his girlfriends workplace to blow it up. Oh, and there is a Femme She Chew (the scenery)  that plays the "Evil Jap" role in a distracting but nicely hammy performance. 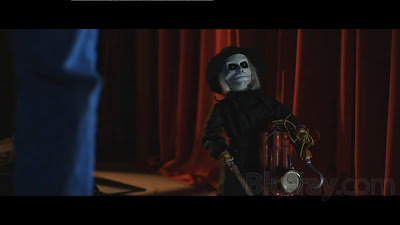 Oh, and puppets. A little bit.  We see our old friends, less animated than they were 20 years ago somehow. And a new NINJA puppet, though for the life of me I couldn't see how Toulon would be using that as a guide for his work.  NINJA is kinda cool, but too generic. We remember BLADE, TUNNELER, PINHEAD and LEECH WOMAN because they are unique. I love ninja, but ninja is not synonymous with unique.
Stuff happens, very little puppet action occurs and then it ends in a cliff hanger?
BAH! 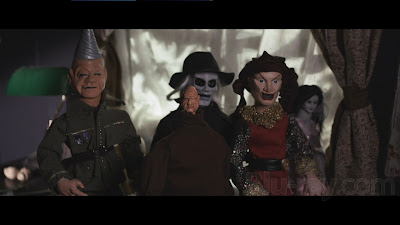 So, that speaks for itself I'd hope. The good parts are that the film looks really nice. David DeCoteau does a nice job creating atmosphere on a limited budget and with some small sets. I mean it, there are great bits to the look of the movie.  The puppets look good, if not a bit more "real" than they did in the original.
Also, I liked the music. Charles Band. Good stuff. Always good.
And...well, all the acting isn't that bad.

The good stuff, not a ton, but it is very well made low budget filmmaking that seems utterly derailed by a really pedestrian script in the end.  There are so many things to do with these puppets, and to give them next to nothing is just unbelievable. If it was for budget, than retool the entire thing before just padding it out.  Just my two cents.

Now, the most important. The Puppets!!  They do look nice, and when they aren't moving there are some nice shots of our old pals, but they are BARELY IN THE MOVIE!!!!  Nothing even happens of a puppet nature for ages. And when you are talking an 80 minute running time, there should not be a feeling of AGES involved.  They also have lost a ton of steps, animation and movement over the years. I want to smile when I see Blade stalking, instead I was groaning at the swinging arms that make a Bruce Le film look like training video for manipulating microchips.  Nice sculpting, but the rest ain't cutting it.

I want Charles Band to succeed. I do.  Badly. I just don't think that taking the premier franchise and doing this is the way to go.  Also, avoid the Blu-Ray disc. It doesn't look good, and you can check BLU-RAY.com for more on the specs stuff.  I also used a few of their screens here because I can't do captures from Blu just yet. 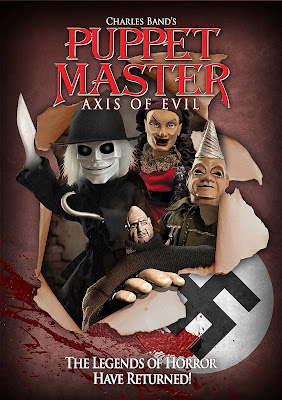 I'm hungry for a good Halloween Horror-and I'm going to have to add another Puppet Master to the list in the next week or two, because I want to see a good one now!
Posted by David A. Zuzelo at Friday, October 15, 2010

I think I watched this back then on video as I really liked the first ones. But they got more boring with the years and I just stopped to care

Nothing Left Inside said...

These films always remind me of being a kid and gazing upon the lurid 18 certificate videos in our local rental shop.
Only managed to get round to seeing the first 3 films a few years ago. i know what you mean about the attachment to the puppets. I ended up rooting for them.