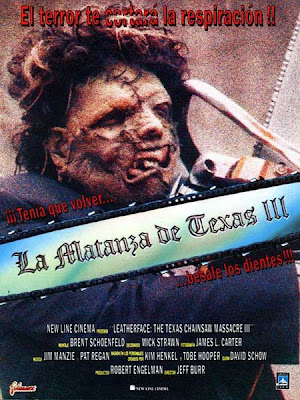 October is here...so every night of the month I'll be watching a horror film. Sure, some celebrate the 12 days of Christmas, but not me! 31 horror films are coming right up! 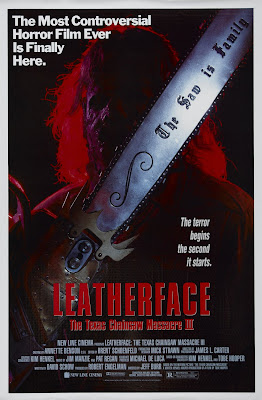 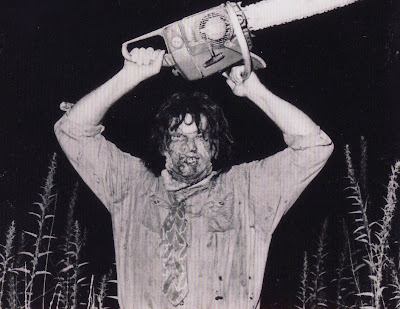 To start I popped in the DVD of what, for me, is a beloved classic. It may not be a cult favorite but the second Texas Chainsaw Massacre sequel, LEATHERFACE, is a ton of fun. Jeff Burr and his crew certainly ran in to a lot of trouble making it, between studio issues (make it a franchise...bring back that guy from Dawn of the Dead!!), MPAA interference (jeez, literally everything wild is shortened in the rated edition) and the fact that they were trying to live up to one of the truly classic American horror film titles worked against the filmmakers that were barrelling through a hectic production schedule. But this movie works for me. While the DVD is "unrated" it isn't perfect, but gives us the best shot we have to enjoy a film that is really different from the standard horror fare. 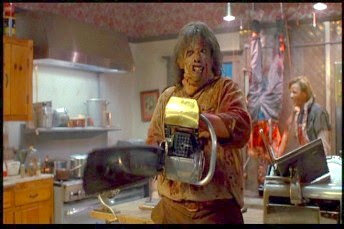 David Schow was one of the best of the "Splatterpunk" writers-and what is left of his screenplay is still the key to success. Fast paced and a nice use of the original premise mixed with an over the top action premise as Leatherface and his freshly minted twisted family members terrorize the usual suspects only to bump in to a survivalist ready to blast them to bits without hesitation, it rocks. I will admit to laughing every time I hear Kate Hodge say "Violence is no answer to violence." Did Schow really have that in his first draft? But other than that, it is a slam bang ride that features a few creepy, and funny, encounters. Given all the TCM characters in the series, I'd pick Alfredo (Tom Everett) as my absolute favorite. TCM 2 is a dark comedy, but 'fredo gets the funniest lines and the delivery is absolutely perfect. 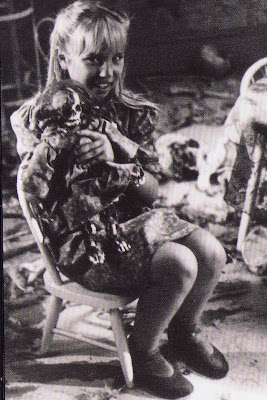 While it can't compete with the original, it doesn't really try to, and what we are left with is a flawed vision of what could have been the best filmed representation of that "Splatterpunk" time. While the label could easily be applied today, there were some special writers in that original club-Schow being right at the top, and since I'm obviously not getting a movie of Jerry's Kids Meet Wormboy anytime soon, this little horror film holds a special place for me.

Also, even if you don't like the film, I can't imagine too many arguments on the outstanding designs and effects. Leatherface is spectacular, his chrome chainsaw is wonderfully ridiculous (yes, THE SAW IS FAMILY tagline makes another appearance) and Viggo Mortensen and his little nails....gargh! Nasty. 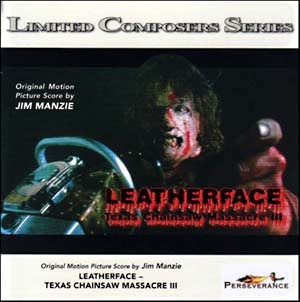 The DVD contains the theatrical ending only, which is a real drag since it brings back Ken Foree for no reason other than a scenario I can only picture of Micheal DeLuca hurling pages at Dave Schow about how he needs him for the second (or third) sequel! As lame as it is, I do love that last shot of Foree and Hodge driving off and her repeating back the "There's roadkill all over Texas" line. Awesome...

Try it, you just may like it-and if you dismissed it as a useless sequel, give it another shot and just relax. Chainsaws, survivalists, "Gonna make ya moan real good..." and my favorite line of all make for a good time. "Militant lumberjacks... I see them all the time."

And hey...Jeff Burr made a recent film with Mil Mascaras?? I need that!!

Happy Halloween viewing to you all! 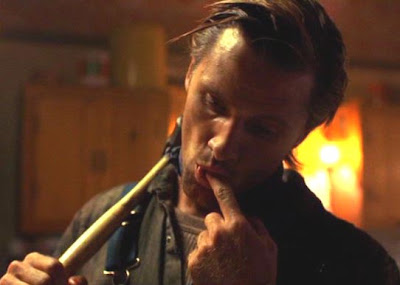 cool post...do you know where i can find Schow's original draft online? thank you.

Not a clue, but if I find it I'll pass it along!