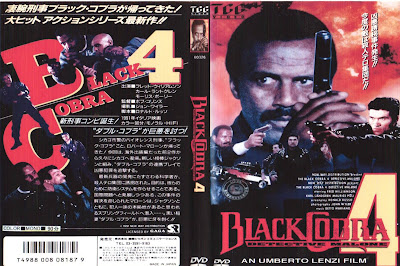 Good old BLACK COBRA! I wanted to post up some of my favorite bootleg covers and figured these would be a great place to start. They were designed by Vince Corkadel and made for the copies made from a set of Japanese VHS that feature widescreen editions of these fun films. Well, the fourth one is more interesting than fun, but they can't all be winners. Click the images for good scans for your printer. Also, I've included the reviews from TOUGH TO KILL-The Italian Action Explosion penned by your humble blogger. Enjoy and FRED WILLIAMSON FOREVER! 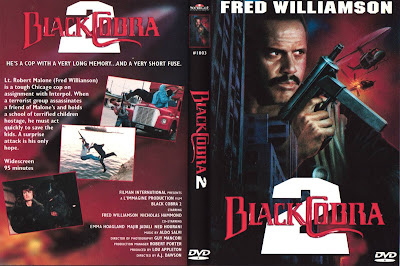 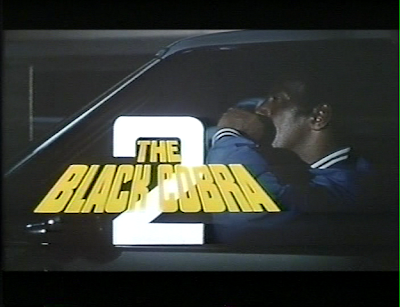 “Bullshit, I’m not going to no goddammed Philippines!”

Detective Malone is back and his head cracking antics will get him in trouble all over again in this follow up to the popular Stelvio Massi film. Now he faces the ultimate action hero nightmare…a mission in Manila! The Philippines are the home to the big bang blow ‘em up flicks where both life and land are cheap, and the movies are cheaper.

Opening with Fred Williamson appearing on top of a super cool logo, some truly stupid drug dealers decide to make a transaction right in front of Malone and his crew. This leads to a long motorcycle and foot chase and culminates in a hostage situation with a massive gore splattered headshot finale that only Williamson could unleash. Of course that isn’t police standard procedure and as a punishment for his ballistic balls out attitude our man Malone gets traded to the Philippines. 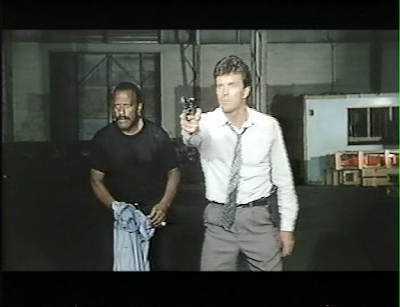 Upon arrival, Malone gets taken by a low conman who also snaps up a briefcase from some tough types during his escape. The Wallet of Williamson may be important, but the briefcase gets the thief killed. Luckily, he mailed the key to find the briefcase off to his daughter…and she (luckily) is attractive. And she likes Malone…lucky again! But will the bad guys use her to find the briefcase? Can his new pal and partner McCall (Nicholas Hammond) be tough like The Hammer and fight back when his son is taken hostage? Will Fred Williamson have a heart attack trying to run up all those flights of stairs?? After gunplay, FredFu, boat ballistics and head smashing all come off the screen everything comes down to a commando raid end sequence that feels so intricate that it could be another film entirely! 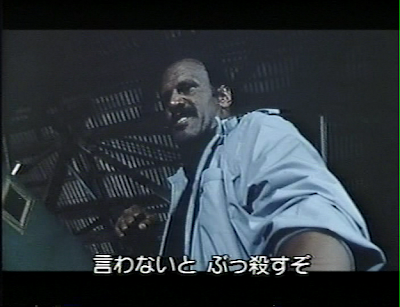 Directed by Edoardo Margheriti, his first feature after many years of working with his father Antonio--the Maestro of Mini and Two Fisted Action--this is a very solid effort. Hindered by a teensy budget even by 80’s action standards, Edoardo (as Dan Edwards) swings for the fences when he gets the chance and does his best. Ample slow motion explosions of shotgun gore and some cool shattering glass certainly bear the family trademark well. There is even a mini-car chase, though perhaps more obvious than the ones familiar from his father’s work. When the time comes for the finale, it’s very assured and well designed, exciting even. The cast put forth their best efforts, and TV Spider-Man Nicholas Hammond goes berserk well enough. The Hammer…Fred Williamson is always reliable and he even gets to do some dancing with leading lady Emma Hoagland. Don’t miss friendly action face Mike Monty in a role as well. 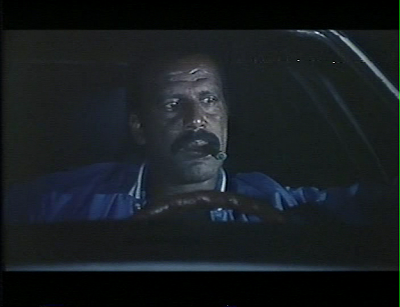 Scored with great electronic aplomb and propelled forward even during it’s slower moments by a score from Aldo Salvi, there is a lot to enjoy in Black Cobra 2. At the least, Fred Williamson fans should not miss it, and there are moments for the gore hounds amongst us that will be pleased as well. Made in Manila, where celluloid is cheap and so are the thrills! 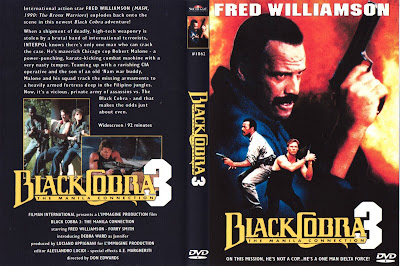 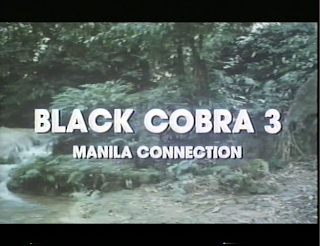 More Manila Guerilla action ensues as The Black Cobra saga continues in this third film. The true trilogy concludes in a collection of bang up fights and explosions with nudity and witty repartee as The Hammer and his new pals go commando to hunt down THAT elusive waterfall in the Philippines!

A long commando scene with CIA agent Charlie leaping and bounding through a camp of bad guys gets the film off to a good start. Charlie doesn’t make it out alive sadly-but at least gets to see a beautiful nude woman before he dies. Greg Duncan of Interpol (Forry Smith) is assigned the case and advised to pick someone outside of Interpol to help him. And luckily Greg’s daddy happened to be pals with…The Black Cobra! Detective Malone is busy blasting away thugs in Chicago, and another vacation is demanded by his boss. Back to the Philippines (where he hates to “GOTTdamM go”) and into the breach he goes. After meeting up with a pretty CIA agent named Tracy and forming a little unit to solve the mystery with his son’s friend, the trio face off against a lot of enemies. I mean that… a lot of thugs and scum come their way. After beating up some scumbags in a warehouse, blasting more boneheads that randomly attack and even investigating a backlit Jesus medicine cabinet for clues, our heroes realize the following plot point. 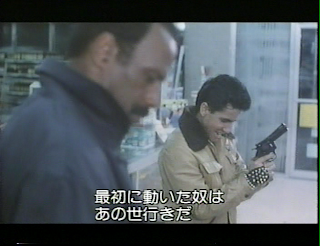 “The only reference we have is a waterfall?” Ah, Italians in the Philippines… they just love waterfalls.

Even more blasting follows as they invade the enemy camp, wreaking havoc and causing some of the most MASSIVE explosions I’ve seen in 80’s action cinema. A traitor is unveiled, a rich guy weeps, the heroes get to laugh and it’s over as quickly as it began. 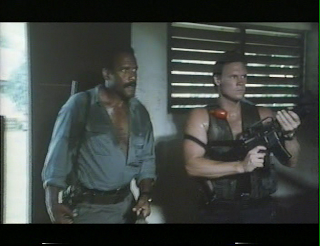 The Hammer looks in better shape in this entry as he runs around the jungle and tosses invisible knives that never miss and teams with Forry Smith-who is best known as appearing as The Green Hornet in Dragon. Though the film isn’t quite as good as the previous entry in the series, it is quite enjoyable with a slew of fun sequences. Edoardo Margheriti’s action direction is as solid as the previous entry, although there are some serious pace issues that rival the action. Walking around begins to take as much screen time as fights and gunplay do far to often for my taste. Funny quips from Williamson keep some of the boring parts bearable, as does some early nudity. The fights all look great and show off some of that FredFu and while not as gory as part 2, a few baddies still go down hard. The last explosion is immense with an overhead helicopter shot is flat out stunning…seriously.

Using the frequently appearing waterfall as a plot point is wonderful, especially given that this film was released in 1990. Making it a fun homage to all of the 80’s films shot on the cheap in a fun way and given the director’s heritage it draws comparison to the mini cars from Black Cobra 2, a fun wink to the audience is given. Or…well, it’s just another waterfall shot, but I like those. 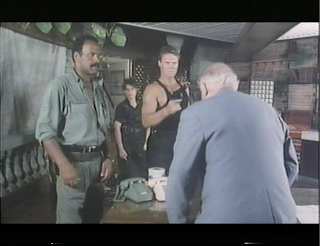 A lot of action, a smattering of gore and nudity and Fred Williamson’s trademark wit add up to a fun conclusion to the trilogy. While the sequels may not rival Stelvio Massi’s original, they do make a nice double bill. 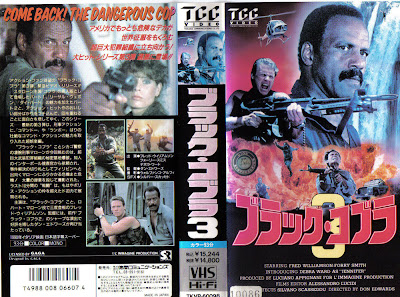 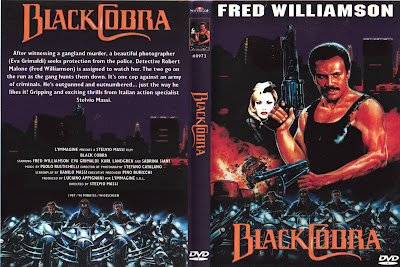