Punchs, Kicks And Feels... Getting ELITE in San Antonio 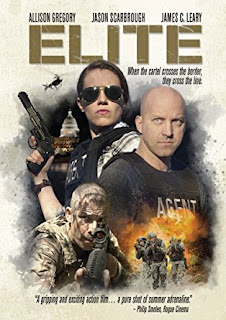 Staring out from this weeks Walmart Action Offerings comes ELITE, the saga of NCOC Investigator (I had to look up what that was!), Abbey Vaughn as she moves up the ranks and finds herself on a mission to bring in an evil drug lord responsible for the deaths of ALMOST an entire Special Forces team.  Sadly for the big bad, he left behind Lt. Sam Harrigan...and that guy, he wrote the film. He is going to drop one liners and kick a lot of ass, BECAUSE HE SAYS SO!

Elite's plot is basically as described above, but everyone involved puts forth a good effort to make the film equally based of feeling and character as ballistics n' fist to face furor...does it succeed?  Mostly, yep.  The lead character has heartbreak and a child to fight for (literally in the final reel!)... a sweet dad, a grizzled new buddy that is on the hunt for revenge and it isn't trying to re-invent the wheel in all the talking and gesturing moments.  And where it counts based on the pitch the box gives, the action is solid. The hand to hand moments far surpass the gunplay, with Scarbrough facing off against guys that want to choke him from the front (bad move...you can see the MMA choreography grinning out in Royce Gracie in UFC 2! mode) and the occasional armbar and some solid camerawork and editing.  I'd be hard pressed to not like the characters and the action, my only real quibble is that the film is a bit schizophrenic at times.  ELITE would be a nice 50 minute first episode of a cable TV show OR even a pilot with 30 minutes of commercials slipped in. Easy to see it hitting the nearly family oriented prime time...until guys are grabbing each other and (in one of my favorite touchs) SOUNDING like they really want to break each other into tiny bits.  ELITE..it's the film that will touch your heart, move your spirit...and you will know when the combatants want to really FUCKING KILL EACH OTHER MOTHERFUCKER!!  *patoooie!*

I have to say, I definitely thought the story of Abbey Vaughn was interesting and well told... I'd tune in for ELITE 2... just keep bringing the fisticuffs! 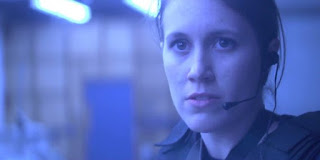