Anyone that loved looking for the latest video oddities in the early 90s will remember (fondly or not so much) the Cinema Home Video cassettes leaping off the shelf at them.  OK, maybe they just attacked me, but I was HOOKED because while they were certainly made for peanuts, they had and still have a sense of wonder in each of them.  How could I not revel in the stunned into senselessness refusal to rent that these shot on S-VHS films generated during my years of video store clerkery?   I would play Robot Ninja endlessly and point out it's superiority to rental standards like Dead Poets Society for hours on end.  So, when I grabbed my Roku Remote and started exploring Amazon Prime it was pure amazement that ZOMBIE COP greeted me right off the bat.  THIS was the title that I was never able to get anyone to take out!  Robot Ninja rented all the time (usually to non-thanks, but money was already in register)...but Zombie Cop would sit. Lonely.  And I really loved the damn thing.

It's silly as hell, it features a character wearing a towel perched on his head, and there is absolutely no real plot to speak of.  But it has a cop that is a zombie! In a Darkman getup!  And James Black as DOCTOR DEATH (hey, it's no OZONE, but what is?)  I had to hit play on this.  And now I'm finding a bunch of Tempe Video releases on the service. It's a good day to love the cinema of LANCE RANDAS (yeah, that would be the magnificent maniac behind THE DEAD NEXT DOOR, OZONE and many more...J.R. Bookwalter!)    So, what can one really say about Zombie Cop?  Before I get to that, an admission.  Not one of guilt, but I may be the only person to say this.
The VHS box art for ZOMBIE COP is and always will be one of my favorite covers of an era that featured extraordinary art.   I really can't nail down why, but over the years when the bug strikes I am STILL trying to find a poster. If anyone reading this knows a solution, contact ye olde author.  I will definitely be your bestest pal from the internet. 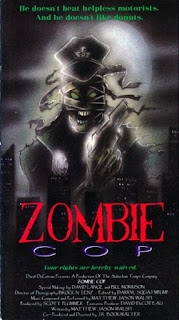 It's the STARRY NIGHT of movie posters featuring a zombie cop.  AND HE DOESN'T LIKE DONUTS! 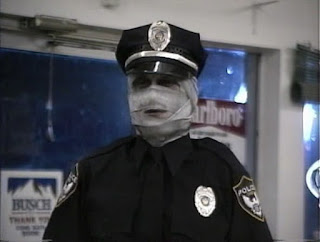 So, the movie! When a pair of cops are on a routine drug bust, who knew that  a wicked voodooman named Doctor Death was one of the SUGAR HILL gang and would curse preZombified officer Gill (Micheal Kemper) off to an unending world of shopping the local Bookwalter's Market (R.I.P.) for bandages to hold his rotting form together?  After the duo drop dead from the violent 10 cent spectacle of police procedure, it's time to rise from the grave like Altered Beasts!  They pair then, basically, run and drive after each other in a series of scenes that are interspersed with the aforementioned goofy bits that include a few esoteric as you wanna be musings upon the nature life and death as well as this guy. 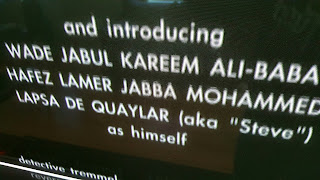 It isn't the gore (there is none). It isn't the action (well, the car chase is pretty fun and you can see the ever sterling David DeCouteau exclaim, "HOLY CRAP" during it).  It's just the vibe of the whole thing, a "hey we spent too much on the other films, this one needs to be REALLY small"  sense that makes it fun.  The script by  Matthew Jason Walsh and J.R. Bookwalter has some pretty funny little outbursts self aware dialog that still, to this day, makes me chuckle.  It's streaming online FREE WITH PRIME, kids.  I could NEVER get this film to rent--so if YOU,yes YOU even start it, you will have made my dark little VHS loving heart smile for a moment. Because Zombie Cop ain't going anywhere...


And now, a funny little bit of trivia.  I was lucky enough to attend the premiere of SEVEN DORMS OF DEATH, a very fun film from Scorpio Releasing directed by the Powerhouse Outta Providence, Richard Griffin.  It's a non stop tribute to SOV films and the days when UHF would bless us with a Creature Double Feature or Dana Hersey dumping on films via The Movie Loft.  I nearly spat out my beer during the screening when I saw Matthew Jason Walsh was one of the writers involved.  Richard looked at me funny when I approached him after the screening to ask if Saint Zombie Cop Author Walsh was in attendance. I am pretty sure I was carrying on about what a legend he is!  The guy SCORED shit in TEMPESOUND, man!  Of course, I then told Richard that I'd proudly put Seven Dorms on my shelf next to Boardinghouse, which is either a blessing or curse, depending on your taste in cinema.

So, go stream it...and I'm going to be back with more Tempe / Cinema Home Video musings, because I see LANCE RANDAS has more films on Prime, including one I've not seen!

Tempe Entertainment's films may have been severely trashed(by many film fans) during their VHS video heyday in the 90s,but considering a majority of the celluloid crapola that has been released in the 00s/2000s(as well as the 10s/2010s) they certainly nowadays look like shining gold and they at least had an awful lot of ambition behind the,since J.R. Bookwalter and the people behind those films were pretty much pioneering innovators for the DIY HD camcorder/iPhone shot genre films that have been made in the last 16 years.

I definitely agree, Steven. I was on college radio around the time Cinema Home Video was putting these out and used to cover them on the air. Even the little ones like Zombie Cop were fun and stood out for me and it is nice to see them all available so easily.
I need to check, but I believe there are sets of the Tempe films with COMMENTARY! I need those, for sure.

The IndieGoGo restoration of THE DEAD NEXT DOOR is on Prime, that is a film I've seen many times and look forward to a revisit today!