And the SPAWN re-read rolls on!  Once I started the initial QUESTIONS arc I found myself reading along at a rapid pace.  What stands out is that I remember this extremely well over the last few decades (seriously 24 years!) and that it holds up pretty well. Though honestly, I'm now a bit hungry to get to what I did not read.
In a nutshell, the initial 4 issues of Spawn is one huge information dump and gets really dialog and expository text heavy in some spots, but McFarlane's artwork is energetic and he manages to make the most out of several scenes that are basically standing around and talking about what is happening. 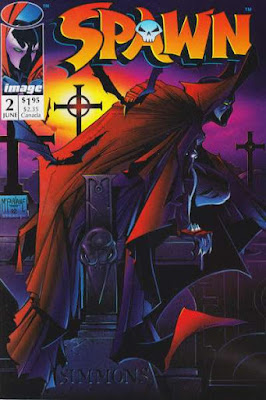 To recap, in the first Spawn story we get, almost literally, the entire set up of the Spawn universe, and a new reader can almost jump in ANYWHERE from here, and that makes it feel wonderfully unique when put side by side by most any of the bigger mainstream books. Sure there is a bit of mystery, but before we hit #5 there is a great panel where the writer McFarlane actually stops and has Al Simmons ponder "WHO, WHAT, WHERE, WHY and HOW!" during a fight sequence.  As a reader, I found myself appreciating this simply because those are actually great things to ponder that somehow end up being shoved into giant arcs. Writer McFarlane gives himself very little wiggle room in the concept, but tons of leeway in the art, which remains really solid.  The Clown / Violator are introduced to the readers, and make a suitably entertaining foil to Spawn's brooding anger. Because hey, if you died, made a deal with a creature called Malebolgia that keeps popping up and even settles the first big battle with a slap on the wrist for the combatants, and realized you left your wife behind and when you tried to see her you had been racially swapped (Simmons is a black man, brought back when he tries to shape shift out of Mr. Toasty into a blonde white surfer dude) and that she is married to your buddy and has kids. Oh yeah, Simmons was spermatically challenged too!  He is in one bad fucking mood at this point. 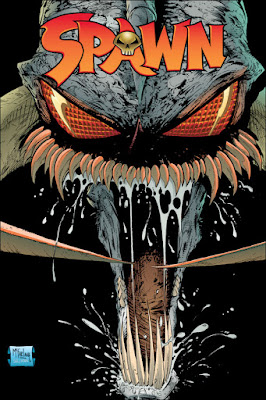 Hard to take SPAWN and say it's start was a masterwork of sequential superisms or anything of that nature, but it also doesn't need me to make any excuses for it either.  Solid story, perhaps a bit over told but McFarlane's art doesn't feel like it is sacrificed to the word bubbles.  If you like his work in the 90s (I do) then you'll enjoy a trip down memory lane, Spawn always looked more substantial in figure than his Spidey (ok, totally different kind of character, I admit)...it's his strongest work of the time I think.  On to the next... I recall that the next story was something that really rubbed some people the wrong way, it's been a long time...onwards!! 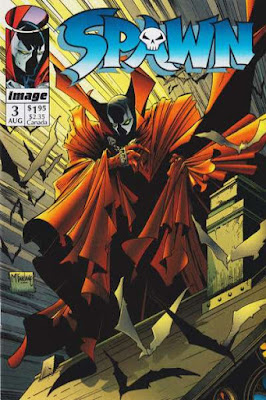