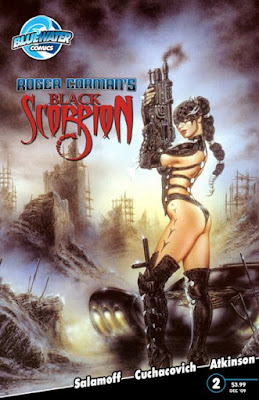 I enjoyed the Corman produced BLACK SCORPION films starring Joan Severance and saw several episodes of the short lived TV series, but had never encountered the comic books from Bluewater Comics until a trawl through some bins made me do a double take!  Bluewater had several titles that were intriguing, but I've read a grand total of ZERO to date.  Lets change that, and where better to start?

The first 4 issues of BLACK SCORPION are written by Paul J. Salamoff and feature a variety of cover styles all wrapping around art by Daniel Cuchacovich.  It's an interesting story and seems to take elements from BLACK SCORPION and BLACK SCORPION 2 - AFTERSHOCK and squish them down into a few issues.  Darcy Walker is the daughter of a cop, and now an officer herself. But as you can imagine, she's of the "I don't play by the rules" variety and gets herself into trouble for excessive force and lets just call it vigorous displays of law enforcement zeal.  Her father can only help so much, but when he is killed, well...it's time for the secret origin to unfurl and the ring of the Black Scorpion to be unleashed in pulpy style.  Donning a costume that is different from the movies (since it makes about zero sense as an actual outfit but is perfectly good in paper form), it's time to get Batwomany and trick out a car and fight an armored version of the man that killed her father!  I have to say that the big bad BREATHTAKER is a cool villain that is much easier to pull of in comics than low budget film!

The art is not stylish, but quite functional and Cuchacovich does a good job at handling the action scenes when they appear.  Likenesses to the film aren't used and this feels like a nice jumping on point that does not require anyone to see the film it was based on. However, it also engages in lots of talky sequences that feel more cinematic in the B movie sense of saving budget by expanded dialog, where the comics probably did not need it.  Several times I found myself tempted to zip ahead to the next action since I wouldn't be missing anything particularly unique.  It's one of the tricky parts of an adaptation I'd think, the concept behind Black Scorpion by Corman's production crew wasn't meant to be more than a sexy Bat clone, and the films exhibit a bit more humor than this dead on comic book adaptation.  You would get just as much entertainment, maybe more, from the 3 hours of film (and 22 TV episodes) than reading the comics, but if you like lady vigilantes in your comics... it's worth a look. 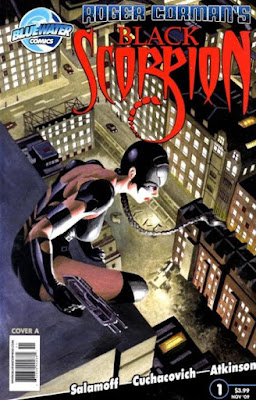 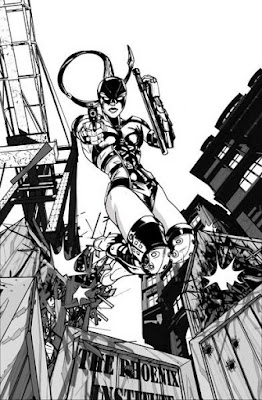