HALLOWEEN MONTH is here. It's not a day, it's not a week, it's not just a holiday. IT IS MY MONTH OF OCTOBER.
Ahem...

Usually I cover each film I watch, but this year I'm just going to journal it when time allows, and so far it's been a globe trotting and splattery batch!  Onwards! 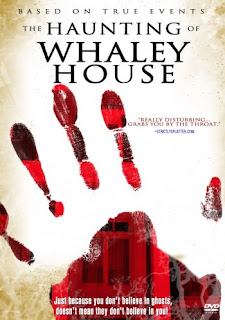 I love movies from THE ASYLUM, and writer/director Jose Prendes gets to forgo Mockbusting, but Haunting Of Whaley House doesn't go far from the classic haunted house and goofy teens / semi pro ghost hunter model, and that is quite OK by me.  When a tour guide at the house has a woman spaz out after she sees a ghost with a "this house is so fucking haunted!!!" moment, she hangs with some pals who think that is pretty cool.  Against her supervisor's advice, she decides to go in the house after dark. "Their Time." And taunt the ghosts with a "Deeeez Nuts" kind of moment.  And...everyone is in deep shit.  While the first 2/3rds are good enough, the movie soars off into a tribute to Fulci, even though they DISS the mighty Lucio earlier, which I thought was kind of ironic.  The ghosts go gore all over the silly kids, and it's good fun.  What makes the film memorable is the final 10 minutes, which has an obvious, but cleverly done little payoff about what happens when you cross into THE BEYOND.  And hey, you get an extended cameo by Lynn Lowry! Worth it for that alone. 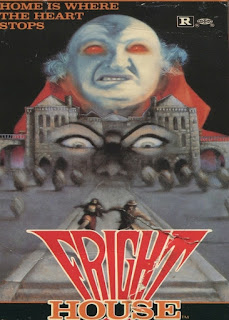 Released on disc as a perk for Exploitation.TV backers on Indiegogo, and also viewable on the streaming service HERE, this Len Anthony late 80s obscurity is incredibly bizarre, headstompingly incoherent in spots and superbly entertaining.  Containing one of two films only, it runs under an hour, but you'll be glad you took the time to visit this Fright House.  There are multicolored monks with low hanging tits and swords, a story that has flashbacks, Al Lewis (pay attention to his character name and then wonder how ANYONE could not notice it being said about 80 times during one scene), hair that is...of the era, and it's going to please the hell out of people, like me, that can watch the ultra extended BOARDINGHOUSE version multiple times.  I'm not sure if I can even call it a complete film, more like the good parts with exposition unfilmed for something that was supposed to be coherent and scary. Instead we are left with something that is like a VERY SPECIAL episode of the old Friday The 13th show. With boobs. I loved it. 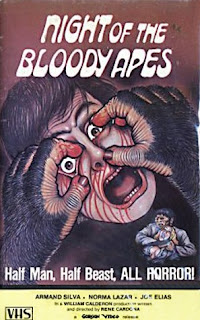 If you don't think a movie about a crimson masked wrestling woman in Mexico that stumbles across a plot to put an ape heart in a mad scientists lukemia stricken son's body which turns him into an evil minded lady humping ApeFaced creature because her opponent that she nearly killed ends up getting chopped to bits to fuel the monster sounds GREAT, then we may have a problem. And the thing is, it is great. The pacing is perfection, the dialog is the perfectly dubbed slab of nonsense and weirdness and you even get some wrestling!  While the gore won't shock or horrify, and there is nary a fright to be found, just read that first sentence again.  It's all about the audacious plot and silly cartoon violence both in and out of the ring that keeps me coming back to Rene Cardona's sort of remake of his own DOCTOR OF DOOM!  Perfect Halloween Salsa with a side of schlock. 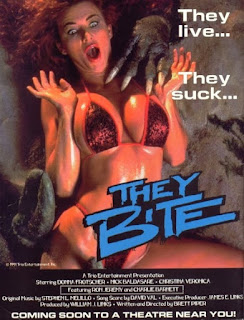 Brett Piper is a favorite, but for sheer tits out and Ron Jeremy'd exposition, you can't beat INVASION OF THE FISH FUCKERS (which is actually in the film, but you'll have to see why on your own!)  That we live in a world where Criterion has not produced a 4 Blu Ray set dedicated to this film is a sad indictment of modern times.  So, get this. When a porn director only out to make a classic bit of the bang/bang in a seaside motel ends up getting a package with his name on it full of what appears to be monster movie stills, but are actually crime scene pictures of an amphibious love nature, it turns out he shares a name with a cute ichthyologist. The two Mel Duncan's are thrust into a world where fishmen are rampaging! Sucking...and THEY BITE!  There is lots of fun dialog to be sure, but the star are the creatures and their goofy rampage as the ragtag batch of characters attempt to solve the mystery of what...WHAT... is happening.  And there is a kick ass vagina monster too!  This one was covered in Fangoria, and thanks to Evil Monk #1 years later, I was able to see it. Love it. Worship at the foot of THEY BITE!  It's a Halloween staple and while it remains elusive, video hunters will be well rewarded by it's chompy charms.
Posted by David A. Zuzelo at Wednesday, October 07, 2015

Hopefully,Vinegar Syndrome will bring FRIGHT HOUSE(as well as both the full length versions of both that film and its condensed companion piece ABADON[as possible extras]) onto DVD/Blu Ray(since theyre already doing that with the schlocky disasterpieces FROZEN SCREAM and THE EXECUTIONER:PART 2),and THEY BITE really does deserve a proper DVD/Blu ray release.