You know, it's really a good sign for any movie when MARK POLONIA shows up as a scientist to explain that crabs eat anything. Seriously. It is. LOOK! 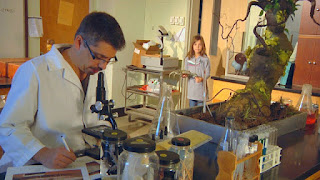 QUEEN CRAB is coming from Wild Eye Releasing, and here at Cinesludge HQ, we surely do love director / effects maestro and all around monster maniac Brett Piper's films.  Filmed in 2012, it's about time that this Polonia Brothers Entertainment film hops out of the pot and into your DVD players.  My love for Guy N. Smith crab books is boundless (here, check out my massive tribute, CRUSTACEAN DOMINATION)--so I was doubly excited to see Piper's name attached because who else would have the balls to make a stop motion MegaCrab in this day and age? 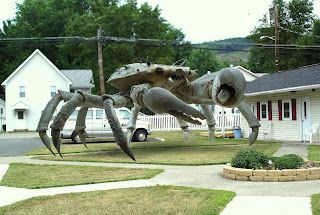 FLASHBACK!  Melissa is a little lonely on her parents remote home that doubles as idyllic rural harm / super science center.  Wait..what?  Well, Dad is working on a solution to world hunger by making some big old mutant foods.  But what happens when the little girl befriends a crab, name PEE WEE no less, and she feeds said crab with some mutated fruit?  Well, it takes a while, but after her parents get blown up (!) Melissa becomes the most beautiful grumpy GET OFF MY LAND neighbor I've seen in ages. AND she has kept Pee Wee through thick and thin and gigantism!  Now going by the moniker GOLIATH, it turns out that we have a rural town with a secret in the lake. A giant crab dropping eggs...  Now, toss in some of the funny characters that Piper does so well, from a goofball deputy, a funny sheriff that definitely doesn't buy into Bulldozer Cults, an exploitation cinema actress come home to see her best friend that gets into kung fun laden battles outside bars and and of course the flip side of grumpy land owners with a cigar chompin' mama that takes no shit.  It's a mess over on Crabbe Creek Road, and Queen Crab is coming to stomp some fools that kill her babies!  But, can she survive against the force of tanks and planes the locals have in their back pocket?  Hah...watch.

The strength of Queen Crab is double clawed, first you have the awesome effects Piper does so well, as QC smashes around and just looks awesome at every turn.  This is almost a given, and even though the occasionally deliriously sketchy CGI jumps in for a plane on occasion, the film looks great all the way through.   I'll go a LONG way for a good monster, but when the script is up to the task of keeping the characters fun and interesting then it's b-movie magic.  From discussing Egg White sandwiches, Post Hole Digger Cults, to engaging in epic faux driving scenes, the cast has fun with the material and it's infectious.


"Let me get this straight, your best friend is a giant crab??" 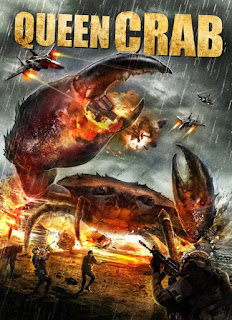 A groovy throwback, Queen Crab celebrates the monstrous clicking of crab claws and is lifted up by a script that is executed the right way at every turn.  You'll growl when QC does, you'll laugh when Kathryn Metz throws down as Z grade actress Jennifer Kane, and eagle eyed viewers will even spot Mark Polonia's video collection, including FEEDERS in the background.  A good time for all...  You are gonna need one big ass pat o' butter to cover all the tasty fun QUEEN CRAB delivers!
Posted by David A. Zuzelo at Thursday, September 03, 2015