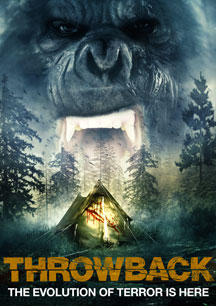 NOTE: I have been informed that the US DVD of THROWBACK from MVD is missing 9 minutes of footage due to a glitch in authoring.  This effects the Vernon Wells sequences (woah, that sucks!) and definitely is to be mentioned.  Let's hope MVD works out a fix and definitely investigate before you Bigfeet Fanatics purchase the disc!


I certainly love Bigfoot films of any stripe, and this Australian film takes the myth of the Yowie (or as I shall call him, Ausquatch!) and brings it to life.  While not exactly a rip roaring adventure or heart rending horror, there are a few bits worth checking out. 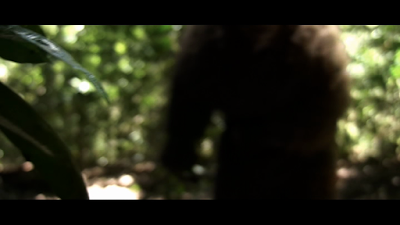 The first thing I learned was that there is a BOGGY CREEK VINEYARDS, because they drink some wine from there. HAH!  Irony. Humor!  Actually, I need a bottle. Thank you, Throwback!!  But the film proper isn't quite as informative.  It's quite simple. Two rather unlikeable chaps are after the lost treasure of Thunderclap Newman, a rogue fella that apparently enjoyed taking prospector's gold many years ago. It's still out there, but nobody has found it. Why?  YOWIE!  No, not a Batman show expletive, but the Aussie Outback Beast...THE YOWIE!
But the Yowie is more an element of action than a full blown threat for most of the film, as the two former bug exterminators (!!!) betray each other over and over with attempted drowning and many many leg woundings (and even a hand wound...woah!) .  After a beautiful woman is thrown in the mix, and this blogger learned to pronounce Rhiannon, the action doesn't pick up so much as the use of human bait for the Yowie becomes a strategy to find some gold. And then there is this bit, which made me smile a whole lot.

Yes, VERNON WELLS!  Wez!!  Plughead!!!!  Very cool, it's a fun cameo that comes, literally, out of nowhere.  As it should be. Now I'm all nostalgic to watch T-Force again. Always room for PM and Wez.

Oh, and the leading guy, he looks like a deflated Brett Favre to me for some reason. Maybe it isn't obvious in the still, but...wow, it just struck me.  When he has to throw something at the Yowie in the final reel, I kept waiting for Wez to reappear and intercept it! 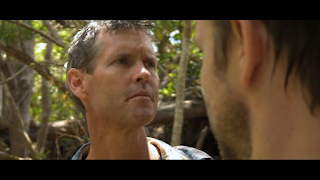 Anyhow, the movie proper is definitely more a bit of heist and doublecrossing than anything Bigfoot related, even though the monster does appear several times in the daylight and seems to have a lot of good Ausquatchy times playing "Hide Behind The Tree While I Try To Hit You!"  The movie looks pretty good and features an EXCELLENT soundtrack by Richard Band and Amotz Plessner that elevates the visuals and gives life to some of the chase sequences.

In the end, THROWBACK takes all the chunks of 'Foot Meat you could want, stirs it around and comes up with the basic sauce, no more no less, though yes...I never heard "baboon" sound so...sexy.

The DVD from MVD Visual is interesting, the transfer is solid enough and there are plentiful extras including a nearly 18 minutes alternate ending that is less explosive.  But it would have robbed me of the interception / Favre joke. I'm glad they went with this one!  Short films and behind the scenes footage are included also.  You'll certainly get your fix of Yowie's in cinema with this film, which says...well, it's the only Yowie movie I know!