When I hear the name OLIVIER GRUNER I get way too excited.  It's probably because he starred  in one of my favorite Albert Pyun films, Nemesis. Maybe it's because he rules the ring in THE CIRCUIT series.  I don't know, but seeing a film featuring Gruner as "THE BEAST" released in 2013 entitled Re-Generator made me instaclick the first place that had one. And hey, it was 3 bucks!  You can't beat that! 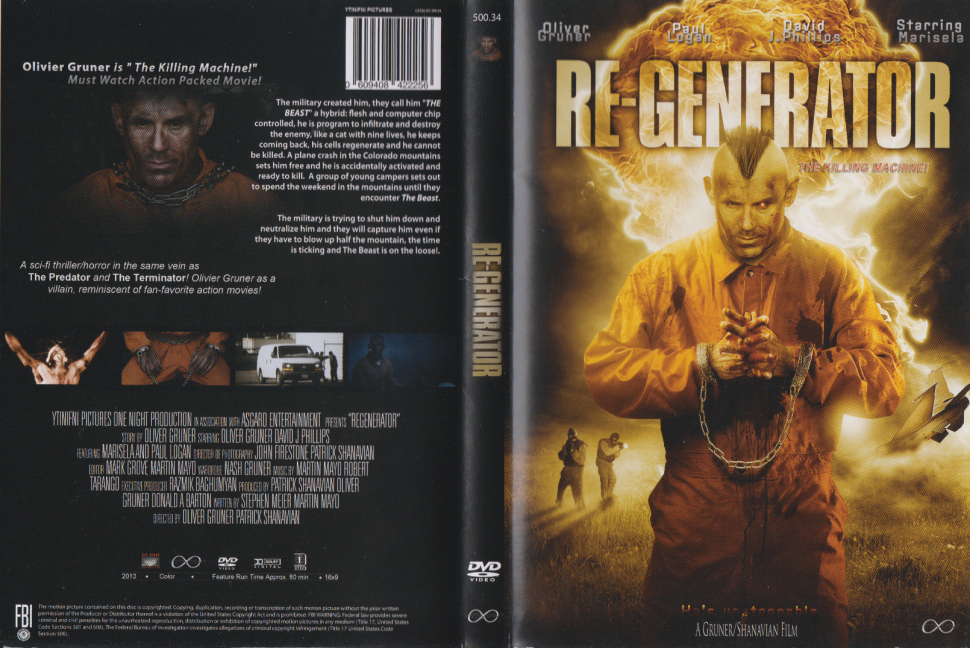 And it gets MORE Grunertronick!  Because not only do we have Gruner onscreen, he also produced, wrote the original story AND co-directed?   DAMN!  I had to see this right away!  I thought it could be great, I feared it could be awful and it goes somewhere in the middle. It's badly done, but really entertaining and also flies in the face of expectations since it isn't an action movie at all. It's like THE BEAST is actually a government sponsored Jason X!


Before I even get to the film, go back to the top of this post and enlarge that DVD sleeve.  They spelled OLIVIER GRUNER's name wrong!! Oliver??  And even better, the solo named Marisela has her first name replaced with Starring!  Check out the back, in tried and true Asylum film tradition they claim it is a cross between The Terminator and The Predator.  Asylum gets the titles right and employs a stylish font at least!  Some days it pays to appreciate The Asylum.


Well, lets dig into this "Must Watch Action Packed Movie!"
First off, it's not an action movie, but it gets off to a wiz little start as an obviously tacked on narrative sequence that runs through the movie, usually telling us WHAT WE JUST WATCHED unspools for the first time and we join a mysterious military plane flying along with a mohawked and violent looking Gruner sitting in chains as it is explained that he is THE BEAST and has only one purpose. KILL!  In a weird idea for monster taming, he responds to microchips by NOT hurting the people with one.  And he doesn't have any program to STOP killing anyone without a chip. Considering that the budget for this film is pretty low, I'm thinking they made about 4 chips. So, he can't be stopped. He can't be killed (he is the RE-GENERATOR as the title says).  And a pair of what I guess are traitors WITH CHIPS (this isn't clear) free him and crash the mysterious plane into a mountain.  In Colorado.  Did they have a reason or a target? No clue. Who cares. Gruner is LOOSE!

After the plane goes down in what appears to be 4 tiny pieces of wreckage, our man Gruner hops up and starts stalking.  But who is there to stalk?  Well, not to many targets are in the woods except for a drunken farmer, a disinterested sheriff and a shit ton of horny kids out for some weed and fluid swapping.  It's Friday The 13th for Dummies time!  When one girl points out that they are having a tough time breaking camp, my favorite dude says, "there will be plenty of time for pitching tents later!"  It's so good.  I like this movie.  Huhuhuhuhh...tents.
And here they are, singing a little ditty called "He'll respect you when you put out."  Sure!

But there are plots and subplots to be had as well. The Beast may not have a leash, but there is not only a mellow sheriff on the hunt, but also a reporter and her cameraman. The reporter is wearing what appears to be a McDonald's headset as she reports on the tiny amount of wreckage and it's pretty entertaining to watch.  Paul Logan of many Asylum hard guy roles also shows up and recruits some operatives to hunt down The Beast. AND a reporter is getting the story narrated by the hilarious Brad Potts who just screams every iteration of FUCKIN' FUCK FUCKITY BUMFUCK at every turn.  Again, I like this movie. It's not demanding, but it's a hodge podge of B-Movie sci-fi and 80s slasher elements that don't get mixed up enough.  It doesn't excuse the parts that go nowhere and the shockingly small bits of actual action, but I gave up on this being a typical film pretty early on.  Who needs average? Or good?  When you have GRUNER you have enough!  And Potts has a great bit that will never be forgotten where he unloads this scripted bit of superior sludge... “So now we have a bionic psychopath on the loose cannibalizing the good citizens of...Bumfuck.”

I'll be brief and just say that you not only get the slasherisms that aren't gory but Gruner really digs into his shadowy smashing of the teens, though very little is actually shown.   t's those bits that feel like wasted potential. A few bits of megagore would have picked up the pace for sure.  All the military plots wrap up sort of neatly as, in tried and true ultra low budget fashion, you almost don't see coming. They finally just BOMB the place, killing everyone!  That would be enough, but a VERY LONG rah rah moment with American flags waving, shadow conspiracy theory montages, being told that what we are lied to by the government is for our own good and even wishing us away with a, "good night, sleep tight" line had my brain reeling!  And then we see that THE BEAST was just a serial numbered experiment.. oh oh. 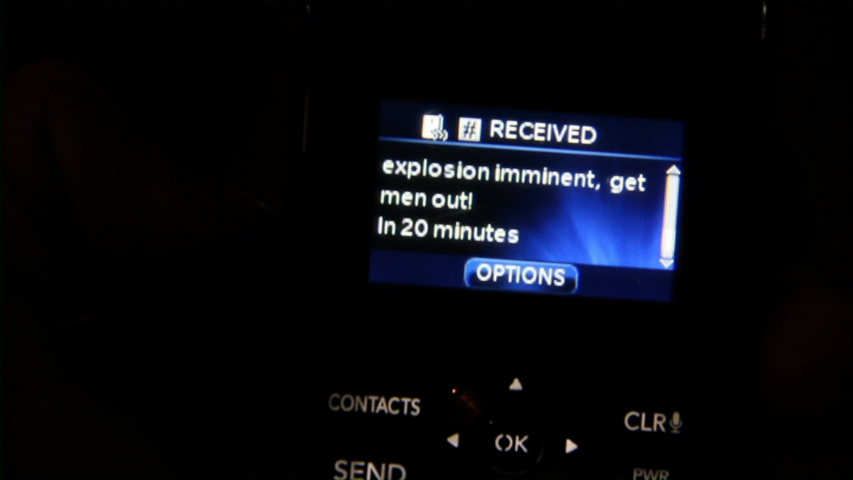 Without nitpicking about story, or should I say enjoying the moments the film provides with a positive mindset, RE-GENERATOR looks pretty sharp, though the seemingly inserted bits with Potts and a reporter getting narration are jarringly poor.  And it is entertaining all the way through in it's own fashion. Do brace for repetition of course, whether it be wandering campers or a combat team attacking Gruner TWICE in the exact same manner before failing spectacularly.  At least it sports a decent synthoboop score by Martin Mayo that I really enjoyed, you get booty wiggling and even a porn funk wahwah guitar to keep your hips groovin' if your eyes start droopin'.  Mayo also edits AND worked on the screenplay AND has a movie coming out next year called Martin Mayo Big Time Hollywood Director!  Good on ya, Martin!  I'm a new fan for sure.  The name Donald A. Barton popped out at me and I just found out that this film shares a Eurotrash connection in that the Executive Producer of the piss awful GIALLO from Dario Argento also worked on this.  Hey, I'd take Argento directing Gruner in a Neo Giallo featuring Cyborg Kickboxers...why not.  You can even bring along DracuMantis.  Just give it a cyborg claw!


Overall...for the hardcore Gruner fans only I guess, and especially good for anyone that likes their films to feature at least 5 different accents from the actors. I enjoyed my time with Re-Generator so much that I have to point out my favorite bit.  The cover mentions Marisela as "starring." Her turn as Miss. Martha (that is the credit) is something else. Now, I love softcore erotic flicks. Truly.  And they can be weird as hell at times (ask anyone that has seen the Maria Ford opus Naked Obsession) but when Miss. Martha gets it on with The Senator in her "Playroom" it's just so disconnected that I watched this bit twice.  I submit to you, my favorite new fuddy duddy getting his fuck on face scene!

Wow.  Re-Generator, I'll always remember you for this!


Best of all? This is followed up with someone telling The Senator that he has a wet spot on his pants!  And his response is just so perfect.  "You know how it is."
We do, Senator Bro, we do...