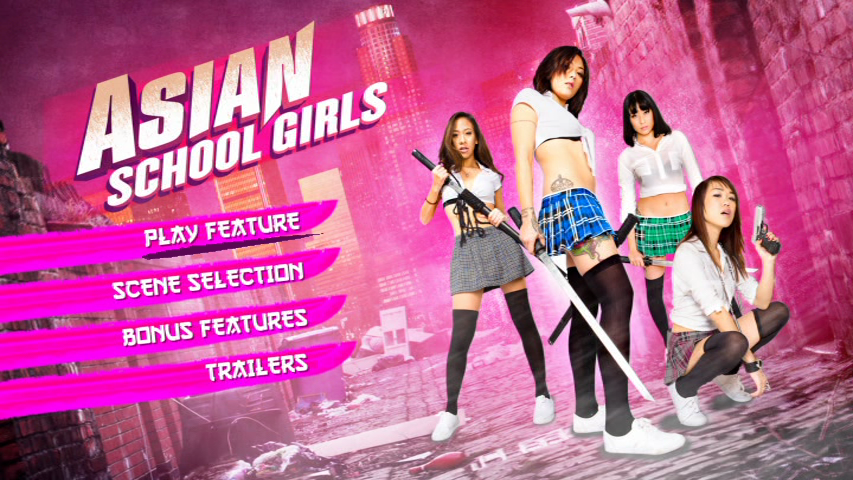 "I know you girls have a legitimate grievance." - Guy about to lose his "wangdoodle"

Well, well, well... THE ASYLUM invades the once burgeoning and now slightly deflated ASIAN SCHOOLGIRL ACTION flick market with their own entry.  Bringing that distinctive funk, the hyper-real location shooting and their own breed of cheap thrills to the table, this entry manages to be exactly what you think it will be, and much to my surprise, a whole lot sleazier than I could have expected.  Forget the tongue in cheek humor of a Sharknado or the busting of the blocks, this film takes Sukeban Deka to the Nikkatsu Dojo for a spin that brings you drama, goofy dialog, a large sprinkling of stripping over a whole lot of hand wringing over penis vengeance!  An Asylum flick that may not be for everyone, but certainly will give exploitation fans fits as it shifts tone, style and degrees of core competency on a minute to minute and scene by scene basis.

The schoolgirls are just out to have a good time, as most are...the joy of youth and all that good stuff. And that night out at the local club brings us some dancing, some romancing, some wondering about the sexual flexibility of their clique and even some dashing young men!  So come on everyone, it's a good time...let's dance with our tongues out!  I can't resist this screengrab.

But good times don't last and where would this movie be without an act to kick off the vengeance the sleeve promised us?  Now, The Asylum has made some grand comparisons on their video boxes before and they vary in efficacy, but the front said REVENGE.  I love a good revenge story.  But you know what?  I really didn't expect these Angels Of Vengeance to be SO defiled in such a surprising manner.  Yep, things take a bad turn when you hit...well, look at the room number and cross reference it with Stanley Kubrick's renumbering job from Stephen King's novel that he turned into a much discussed film.  HAH!!!  Get it?  Even in the oddest spots, The Asylum surprises me...

For the next few minutes it's right into the darker side of the Asian School Girl seeking revenge genre, the violent torture and violations are kept mostly off screen, but everything is conveyed through the eyes and ears of the accidentally undrugged Hannah (Sam Aotaki).  The duo that picked them up have brought them to a group of sleazy white guys that picked an Asian theme for their debauched dance party on this evening, even bringing the two runners into the mix by forcing them to be complicit in the crimes.  Well, this will certainly bring MARTIAL ARTS REVENGE!! 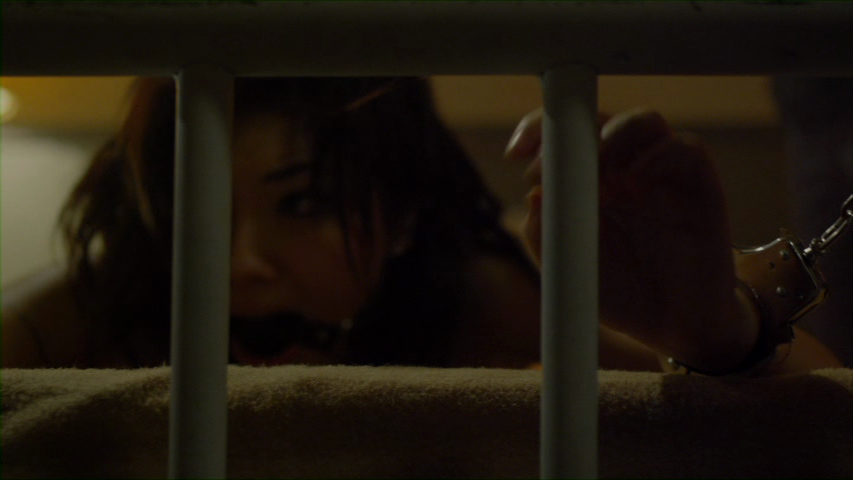 Dumped off and broken, our gang of four becomes three quickly as one of the girls commits suicide, shamed and blamed by her old school parents.  MORE REASON FOR MARTIAL ARTS REVENGE by my paint by numbers chart.  And then it's on...  But I did mention those tone shifts, right?  Well, here is where things get jinky.  And by jinky I mean the film shifts into straight up exploitation film overdrive as one of the girls hatches this plan...

So, with clothing off and a burning desire to demolish, our trio of angry action girls are ready.  Using a family friend to train them, they carefully dig into the seedy underground by going to just one spot and instead of seeking, they simply wait out the dastardly duo of mickey slippers!  And for awhile, it's all in good fun...like this.  It's not the most action oriented plan ever, but I'm down with it. 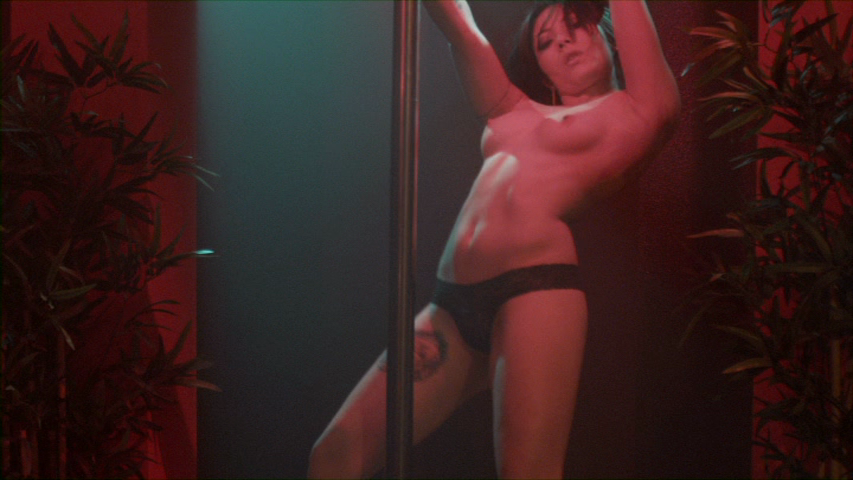 TONE SHIFT!!!  After they finally do capture the two dolts that brought them into the despicable lair of the flesh for sale trade, they ACCIDENTALLY kill both of them even after agreeing not to.  Lesson? Don't point guns at people you are deeply angry with!  I guess that isn't in the common sense curriculum.  Now they have no way back.  It's a moral quandry. Yes, NOW they have a moral quandry?  OK, I'm rolling with it. The moral quandrizing is not as entertaining as the pole dancing and stalking, but it doesn't last long as the girls go up the ladder and down the pole again in order to find the bigger prey, the man behind it all.  And since we have started mangling, they figure why stop there?   I mean, we had a training montage mixed with rubber torsos getting struck and more stripping.  BRING IT ON!


After interrogations, depenisizing, and eventually being captured, the martial arts trainer and one madly coifed action dude spring the girls and it's time for the finale, which is entertaining and fast paced enough to keep this Asylum fanatic completely entranced.  The time for talk finishes up and it's a host of bands (most notably Chris Cano's VARIATION XX if you ask me) setting the tone for the promised...the tone shifted several times...the ultimate and affordable...FINAL SHOWDOWN.  Will the good cop be involved? Will the girls survive? Will the sometimes heroic trio eventually graduate from Citrus College?  Rent, buy, believe... find out!

ASIAN SCHOOL GIRLS is a really interesting Asylum film, and I've watched about 60 of them in the last 5 weeks (more on that later!).  It takes the tropes from a successful subgenre, which is one of the studios specialties, and mixes them in with familiar sounds, actors and locations.  While many of the films are rated R for various bits of action and mayhem, the crew went all out to give this a sexploitation swing that feels outside the box, more inline with the horror films they were producing several years ago. Mind you, this is a positive and not a complaint from me at all, I'm all for a good edgy action film, though comparing it Sucker Punch (bleh) and Dead Or Alive (which I liked, but its NOTHING like this film) wouldn't suggest the contents at all.  From funny bits about cops bemoaning lost wangdoodles to the Hostel style torture scenes with threatened "female circumcision" right up to the lead actresses, all beautiful and led with style by Sam Aotaki (who diehard Asylum Inmates will remember as the sexy infiltrator from ALPHA HOUSE) spending screen time alternating stripping, fighting and trying to solve out the big questions in life about ever being charged with murder and graduation credits, it's all over the map in the best way.

I truly believe that when you make a low budget film like this you owe it the viewer to go off map and make your own.  The Asylum does that to great effect sometimes, always tossing in strange subplots (who could forget the Same Sex Marriage Debate from Transmorphers: Fall Of Man?) and bizarre left turns.  Director Lawrence Silverstein keeps things going, tossing in a shot that looks a whole lot like something out of Faster Pussycat! Kill! Kill! and the pictured Shining reference.  Its another playground styled flick that takes it's resources and title promises as far as they can.  A lot of it will zip along and the viewer will have to decide which parts they can enjoy or not, but for me, the unbalanced craziness is all part of the appeal.  I got what I expected. I got a little more than I bargained for.  And at the end of it all, this one is definitely an Asylum film worth revisiting down the line.  Just be ready for a whole lot of stripping.  I think I can handle that....

Oh oh...and let it never be said that we here (alright, me here...) would hold back from what YOU want to know.  The burning question that is even more on your mind than how that shark got TWO HEADS.  The way cool Andray Johnson of Jailbait is in this!  YES!  Wait, that isn't your question?  Alright.  So, if you put two barely clothed Asian School Girls in serious peril of torture and death, what will they do?  Discuss physics?  Wonder if there tamagotchi are still alive?  NOPE. They will make sweet love...and then bust into action.  Like this!

So let's play it out in Asylum fashion with some VARIATION XX written by the ever reliable Chris Cano.  From the soundtrack of ASIAN SCHOOL GIRLS (and MEGA PIRANHA...)  here is THEATRE OF PAIN!

Fun fact about asylum: Their CEO rides around the office in 80's style roller blades. It's pretty awesome and he saves tons of time that would have been wasted on walking.