The Phantom : KGB NOIR - THE HAMMER

I've been catching up on my Phantom reading and after having Hannibal King sketch on my black cover of the first issue of KGB NOIR #1 I realized I would have to frame it because it is just that good.  See... 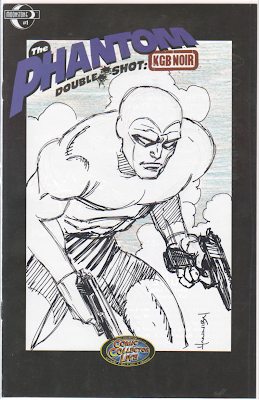 So, I had to buy the trade to keep the kick ass story inside as a readable entity, because if there is one thing I like to do with The Phantom, it is re-read the stories.  KGB NOIR: THE HAMMER is an utterly unique bash up that would appeal to a slightly different audience if they decided to take a look.  So, here is a look Tomb Pals--you might want to check this out. 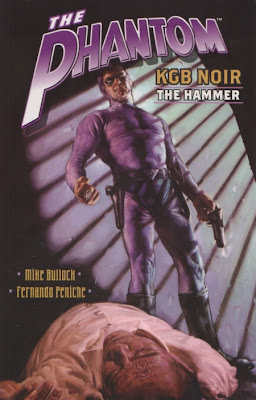 The Phantom is a character that I love with a mixture of nostalgia from reading it in the paper for years as a young little DZ that hadn't started sneaking Warren magazines like 1984 into his room.  When used right, as Moonstone did most times, there are lots of possibilities for him.  A rich history, a unique element of family and high adventure, social consciousnesses and a dude in purple that punches guys and leaves them with a skull mark in their evil mugs all collide for big fun.  There are lots of great arcs and tales of The Phantom, and I'd still call KGB NOIR unique-which is a difficult thing to do.
This is ALL ACTION PHANTOM!  I mean it. See those caps? My keyboard isn't locked. But there is THAT MUCH ACTION!! It demands CAPS!!
Watch as The Phantom lays the SMASHDOWN here...click to enlarge and make it SMASHING!!! 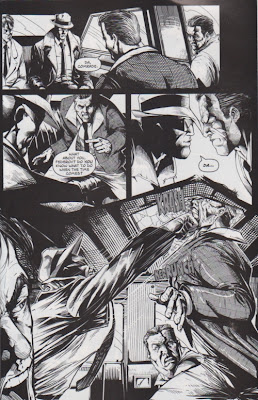 There isn't exactly a plot, outside of an arms deal for some WMDs that a Russian sexy sexy lady wants to use to bring down the US.  The Phantom busts heads in big action setpieces.  Seriously, that is it.  But do you always need more from your comics? I don't...   The fists fly with a quickness and the dialog is straight up superspy fun as The Ghost Who Walks gets very very corporeal and beats up all of the remaining cold warriors in the world in 6 quick and razor sharp one inch punches of sequential sweetness.  Boris gets a Batteringinov to say the very very least.
The writing is slick and quick and I enjoyed the "Serial Thrills in 2010" style presented in the original issues.  I would be waiting on the next issue eagerly, and this collection lets you skip the anticipation and just dig right in.  The dialog is a combination of insanely over the top HAHAHAHAAHAHAHAHAH  and just knowing when to NOT have The Phantom say anything.  There isn't a whole lot of addition to the legend of The Phantom, just one big adventure that plays like a crazy violent animated summer blockbuster with exploding helicopters and an explosively curvy Russian Bombshell ready to blow up the world.  I dig it!  Imagine if Lee Falk had asked Sergio Grieco (Agent 007 series, Password: Kill Agent Gordon) to direct a Eurospy flick with an unlimited budget-that is what we got here. That brings us to the art by Fernando Peniche, who does a great job in the start of each issue by giving a quick "For those who came in late" splash to drop the reader in to the fun.

On first look I found the art to be a really cool throwback to the Indy action comics of the 80s and 90s. The Phantom is JACKED UP, the women are KUUUUURVY and thugs have necks the size of thighs and thighs the size of ancient oaks.  And they wear business suits that make them look like a 1920s gorilla thug ready to battle an atomic robot.  Or Dolph Lundgren.  Yeah, Giant Lundgrens!  But then I really started to dig what Peniche was bringing to the table.  The art is as fast as the story and equally hyped up to bring excitement out in every page.  It isn't often as I read something I think about how much I want to buy a page out of a book, but all of these catch up pages, with the above, being some of the most fun pure action comics I've seen in a while.  I hope that Peniche is buried in work right now.  While The Phantom is probably off the table, I'd love to see him find an action series that is worthy of what he brings to the table.

Do you like action in your comics?  Do you prefer that your costumed characters don't stop for lunch? Do you dislike the constant "clever" use of repeated panels?  Do you want to see The Phantom kick, punch, leap, crash and foil evil with repeated punches to the buzzcut sporting gorillas of a day gone by?  THIS is your series.
Get it.
The original series, still available from Moonstone, will set you back a few extra dollars, but contains back up stories including DEATH ANGEL (I really want more of this!), The Spider, Domino Lady, Buckaroo Banzai, Captain Action and Kolchak The Night Stalker. While some of them are quite good, this main feature stands tall on it's own.  Only ONE copy instock at Amazon.  Do you want to miss out on this?? 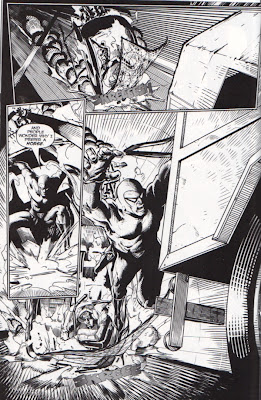