I know that I'm sometimes quick to judge comics based on my sentimentality for "da good old days" when I could actually afford a stack of floppies every week for less than the price of my water bill... and if there is one company that I have so much love for that I'd be wary of ANYTHING produced using their lovable little batch of characters it would be the Atlas Seaboard line.  I've talked about them a few times on this blog, and I have long imagined a world where TIGER MAN would have been the hottest superhero and that my son would be sleeping in some IRON JAW underoos one day.

Well, it looks like the characters are back and that some care is being taken to create something cool and unique.  Now, did they succeed?  THE GRIM GHOST and PHOENIX #0 are a start.  Can they live up to my memories of the originals? Nope. Can they replace them? Nope.  Can they still be interesting and fun?  I really hope so!  Just seeing that Tony Isabella, the original writer on The Grim Ghost, will be writing that title is about as good as I can ask for.  So, I'm ALL in on these. 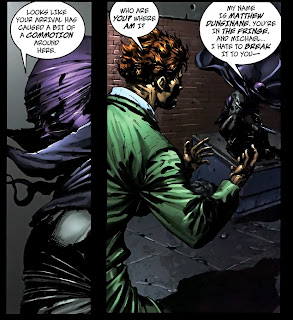 And when New England Comics offered the #0 issues for both at a price cheaper than one Marvel book, it felt like the old days.  I've always held the idea that the Atlas titles were basically set in the Marvel universe, just one street over...a strange street where the Bog Beast was a Heap of trouble and you could invert Spidey's nipples and make him THE DESTRUCTOR!  Who could resist a book with art by Ditko and Wood?  Not me...

So, first up was GRIM GHOST.  One of my favorites, the original character was a hung highwayman in league with Satan to get out of hell with a little vengeance on Earth mixed with the "dandiest" Adam Ant ultrahero costume (and black horse) ever.  Right off the bat I was a bit sad to see that he swapped his frills for Liefeld Pouches, but a pretty cool face wrap and cape bit sort of balances that out.  Not big on Jeans on a hellbursting hero though.  But hey, it is what is in the pages that counts.  This zero issue introduces GG very briefly, but it is obvious that the origin story is fairly intact barring the cosmetic changes of it moving to current day and losing some of that awesome 70s sensibility.  We meet a guy that is obviously a ghost trying to make his way through the netherworld for the first time as he bumps into another lost soul and it's spirit guide. Things go sideways as evil soulsucking bastards led by the monstrous Braddock arrive and slash and grab for the new ethereal prize.  Grim Ghost shows up and blasts the badguys. When he introduces himself to our lost souled new pal William he identifies himself as Matthew Dunsinane (!!) and tells us that we are walking in "The Fringe"...and that it is the land of the dead. 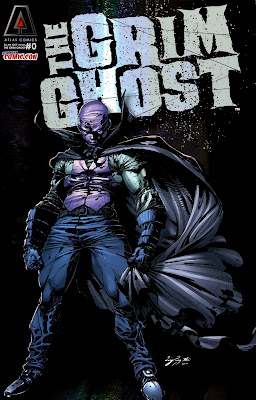 While the set up is pretty obvious and the punchline tells the reader what they certainly figured out pages before, The Grim Ghost #0 works as a nice introduction and has me wanting more.

I was pleased to see J.M. DeMatteis (who is the Editor in Chief of Atlas) and Joshua (Gears of War) Ortega on the plot, and Tony Isabella coming in with #1 is pretty exciting as well. The artwork is interesting, but this is where nostalgia takes a bit of hold on me.  The original Atlas books looked a lot like the current Marvel books, using talent like Rich Buckler, Steve Ditko, Howard Chaykin and Ernie Colon amongst others to get there.  This Atlas book has sort of the same feel, but it is similar to current Marvel books, which I'm not all that in love with. The coloring is heavy and a bit dark (well, hey DZ-the book is called The GRIM Ghost right?) and backgrounds are rather sparse to say the least. But Qing Ping Mui knows how to draw a big badass Grim Ghost that doesn't feel exactly Spawn thankfully.  Points for that. I will say that I really don't care for the look of real people that much just yet, our hero is one of the ugliest dudes I've laid on.  It was hard to tell if it was inconsistent from panel to panel or just...well, maybe he is supposed to be ugly!  If so, good on you Mr. Mui!


$
2.00 well spent.  I want more GRIM GHOST, hell, I even want the T-Shirt!  Is it the original? Nope, but it is also 2011, so I'll have to get over that.  Oh, and I want that 7 inch statue they mention on the website--how am I gonna get it?  I checked all the retailer sites and couldn't find anything. 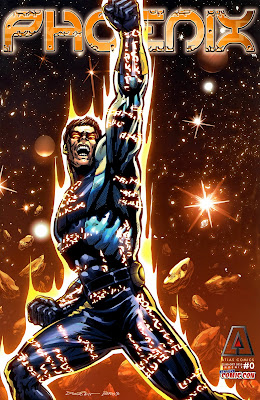 That brings me to Phoenix, one that I liked in the early run, but not a title that really gets me as excited as say... Fright with Son of Dracula.  It also doesn't feel much like the totally wild original.  But lets take a look.  The original had ice aliens and stolen alien suits and big battle scenes.  Phoenix #0 goes the much more common B-Movie route of "two buddies apart for a long time, a hot woman who was an ex and is now with the other buddy, a bar and an alien kidnapping.  But hey, you get to meet the two pals and see how they still love each other even though time and circumstances are diff....well, you know.  With a quickness that is much appreciated the guys and lady make it on to an obviously alien vessel and get put in skin tight outfits and are tested.  There is a nice surprise or two that I won't surprise, but it of course ends on our guys being identified as "unique" amongst the humans the aliens are testing.  This one is going to take a little more reading I think, the premise isn't nearly as wild as I'd hoped it would be, but I'm not ready to give up on it...bring on the suits n' fightin' and stuff! 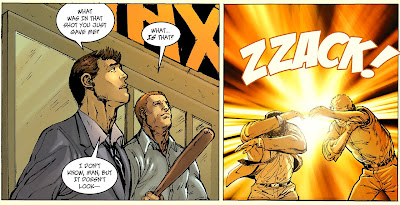 The art by the Dorian Brothers is a bit chaotic, it reminds of a "Valiant" effort with some Barry Windsor-Smith flavor ala Archer and Armstrong, but with a lot less polish.  I like less polish to be honest, but the coloring is again so dominant it drains the linework of any emotion. Probably my preferences again, I don't like the David Finch style that seems so popular these days.  It gets the job done, but I'm looking forward to seeing the art develop a bit more.  This page sort of sums it up... 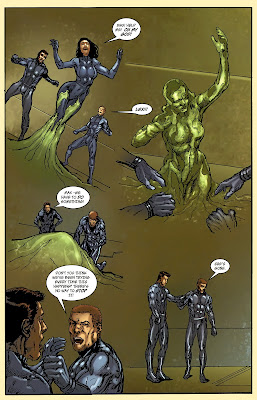 Both were intriguing, and I'm ready to go for another ride with the Atlas Characters.  I truly hope, and believe from all I've read, that Jason Goodman uses his resources to create something new with the characters-and to take advantage of a short but rich history.  Pablo Marcos just completed a Spider story for Moonstone, I can't imagine there being an Iron Jaw title without some input, even a cover, from the man.

If you like your comics old school, I don't think you are getting that here, but it shouldn't be the point.  Atlas was a company that spun around the conventions of it's Marvelous competition and made something unique.  Unique today is not the unique of that time--so lets go...get these books out and I'll try 'em all!

You can learn more about Atlas 2011 (heh, there is a Peplum title that should have been in the original line!) by checking out the website here:  ATLAS COMICS!
Posted by David A. Zuzelo at Sunday, March 13, 2011

No Christ allegory for Phoenix?