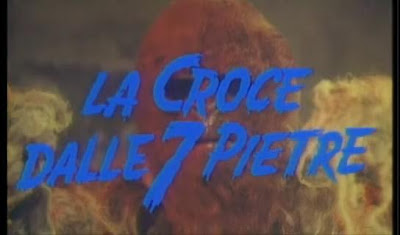 I love werewolf movies, and Cross Of Seven Jewels, which appears to be the kamikazze Eurotrash Cinema mission of producer, director and star Marco Antonio Andolfi , is indeed a werewolf film. Now, I could tell you it was great, but I'd be better served to tell you that I really love it. I've paid more attention to Cross Of Seven Jewels than I have in The Exorcist and all the Nightmare On Elm Street sequels combined in the last five years.
A sort of boneheaded charm keeps the film going during it's tedious stretches as the one man hit squad on good taste Andolfi charges headlong in to not only wasting Annie Belle, Gordon Mitchell and Giorgio Ardisson in small roles, but managing to give the Japanese fits as they try to hide his dangling wolf dong!! 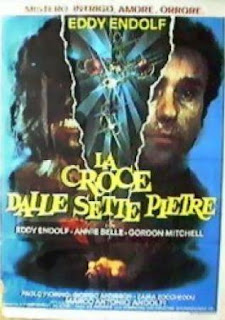 Mario is a rather luckless fellow who arrives in Milan thinking he has the hottest cousin in the world-but it turns out that his hopes are dashed quickly as he gets robbed right away, and the titles cross is stolen off his neck. The problem is that the cross controls his lycanthropic curse!  Oh shit!!!  Well, for some reason this cross criss crosses the entire underworld of the city and Mario just keeps following the trail to retrieve it.  But hey, I'd rather it stayed lost, because he transforms in to the crummiest 1/3 werewolf, 2/3 moderately semi-fit nude Italian guy that swings his sausage and claws all over the screen. Chasing, slashing and S L O W L Y transforming every night. 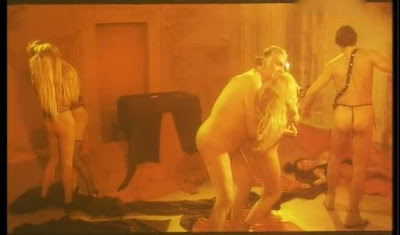 Dammit! His "cousin" is just a plant as well.  But you would think there was an upside, and there is for the viewer. Mario has weirdly cut and animated flashback/flashforward/flashsideways moments that feature what appears to be a gummi bear that feel on the set of a Naschy film and picked up a little bit of residual hair, yet none of the talent of the make up people it was near.  Yeah, the bearwolf with the spinning psychotropic whirlygig effect ROCKS me. I love it. Not in a "I'm a gumball machine and I can crack jokes" way at all. I love it because it is the very reason Andolfi made the movie. He didn't make it well, but he made it exactly as he wanted to.  Oh, and he kicks a bunch of ass and gets laid and the movie ends. 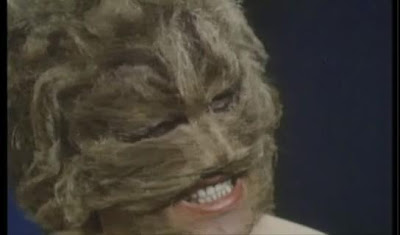 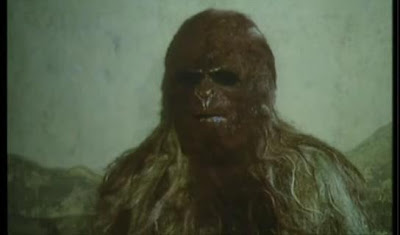 This is real trash cinema friends, the pacing is really off in spots and you'll wonder when things will get rolling...and then Gordon Mitchell starts glowering at YOU and the gummi beast arrives and the naked werewolf guy stands awkwardly like a rushed Mike Ploog panel inked by nobody whose name we would know to finish a job and Annie Belle's nipples pound at her sweater.  It may be ragged around the edges, but this is the type of film I'll hold on to as tightly as the disintegrating T-Shirt I wore when my son was born.  Andolfi really likes Naschy movies and shows that everyone really can't make one, but trying gets you a lot of points on my Werewolf Dong-O-Meter and he sure puts forth everything he has. 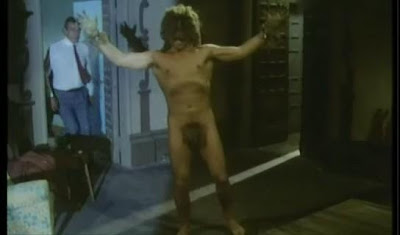 Haha, I can't believe you haven't unleashed this one on us yet -- move over, Big Jesus and the Horsey CreamPies!

And only a Schlong Dong Silver bullet will lay him to rest.
I have the very same Japanese VHS Original & have left it far too long without watching. Must remedy that now after being awarded the Zed Factor of fully fuelled Fun approval. Thanks for the heads up DZ. Paul

This is great fun gents...BB, you are gonna get an eyeful of censor blocks! But man, it is a fun fun fun little folly.

I think I found my Halloween costume in that last pic!