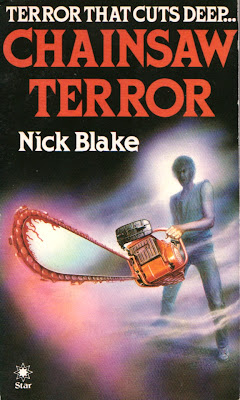 I have not read a ton of Shaun Hutson novels, but I've enjoyed each one that has crossed my path over the years. But I was reminded of CHAINSAW TERROR when I was recently pulling through some old Deep Red fanzines.  Never read a book called Chainsaw Terror? By Shaun Hutson using a pseudonym???  Well, that had to change.  Sadly, all the copies I found were quite expensive and I left it on my wish list at Amazon as a "someday" type of item.
And then it popped up for FOUR DOLLARS!
So, I ordered and waited, fearing that I was going to get CHAINSAW TERRA or something completely incorrect, but that didn't happen. Finally...here I come "Nick Drake!"  Rip me with your best shot.

Chainsaw Terror does not dissapoint in any way, it does exactly what it says it will do in a fairly short period of time, and indeed it does have a lot of chainsawing going on within a sick little framework that hinges gore sequences together without getting boring.  And I also learned the power of a title. If you promise to terrorize with a shredding implement and deliver on that promise, every page that mentions cutlery, tools or even heavy dishes feels like a prelude to something wild.  It just works like a well oiled...nah, that is too easy.  It just rips your literary horror hound senses apar...nah.  OK. It is is simple, dirty, nasty, smelly and tastes like the kind of rotten nectar that every budding gorehound seeks out in the next film they rent.  Delicious. 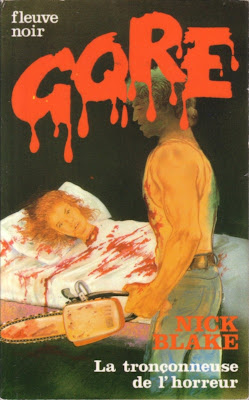 Edward Briggs is downright nuts.  His father is a handyman with a wife that doesn't want to be with him anymore.  So, he kills the crap out of her and kills himself in nasty fashion as well. Of course, Edward witnesses this and it sours him on relationships. Except for the one he has with his sister Maureen.  Skipping ahead, the pair are now a little more balanced. This means Maureen is sane and Edward is insane, which puts them square in the middle on the teeter totter of doom.  Add a chainsaw and things tip awfully wrong to the insane side!  When Maureen decides to leave the (luckily) soundproofed house the siblings share to be with her boyfriend it is time for Edward to snap. And does he ever.  After demolishing her into bits, he saves her head and goes on a short but grisly rampage against women that he imagines have wronged him, and men who love or pimp out the women that he targets. The workbench in the soundproof house gets one hell of a workout!!
There are lots of elements in a straight line from witnessing a grisly homicide to becoming a grisly body pile of a self inflicted accidental homicide for Edward.  We get a little romance, some pimp and whore drama, some reporter saving kindly prostitute drama, some explicit lesbian orgasming, some explicit all entry sex scenes and even a bit of rambling from Edward.  But where Hutson goes nuts is where it counts. When the title lives up to the name.  These suckers aren't just gore scenes by and large, they make the "entrails spaghetti" and clicking castanets of Crustacean domination seem like an fruit cocktail appetizer set to the tune of a baby rattle.
"Now he wrenched it free, briefly hearing the drone of metal on bone as it crunched her pelvis and lower ribs in to a thousand splinters. Entrails seemed to snake upwards like the bleeding tentacles of some stricken octopus and a stench so rank it made him sick, wafted up from the riven cavity of her stomach."
And that is just the end of a scene... 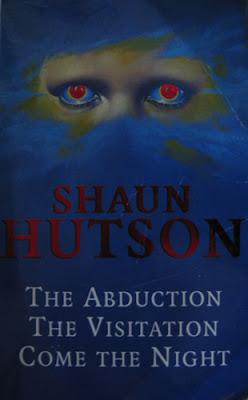 Chainsaw Terror is the exploding barbed wire deathmatch of horror fiction.  While it isn't an every day type of read, and it isn't written with any particularly outstanding craft in the plotting area, this is what we occasionally find ourselves as horror and exploitation fans looking for. You says TEXAS CHAINSAW MASSACRE and you go in with open eyes and hopes on having the title live up to what it promises.  Hutson pulls that off here. Given my interests I can only describe it as a heady (har har) stew of Pieces, Buio Omega and Erotic Nights of the Living Dead.  You may scratch your head, but that is pretty high praise from me.  I wanted, searched and found what I hoped would be a fast paced and splattery read and this fits the bill to a bloody saw link.
While I doubt Shaun Hutson would proclaim it his finest, though the above omnibus does showcase the censored version along with two other novels that used a pen name, it shows off his skill at the basics of storytelling that lie under his later novels.  The dialog works, the characters may be two dimensional, but they do get enough flesh for us to see when it is suddenly shredded away by a power tool and the level of descriptiveness be it internal gore or the description of a womanly "cleft" is charmingly over the top.  Also, the term "powerful erection" gets as much play as it does in Guy N. Smith's Bamboo Guerrillas.
Come to think of it, the two novels are sort of watersheds for me as a reader. I like the hacked out novels, the ones that are quick, dirty and direct. 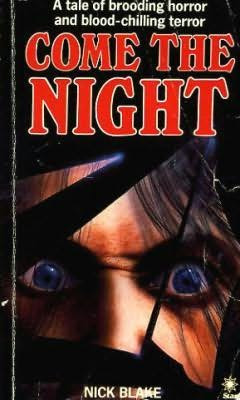 Chainsaw Terror is notoriously difficult to get, but it has a fairly interesting story of publication as well.  After it was released the title alone caused a bit of a stir, never mind the contents.  So, the same publisher, Star, re-issued it heavily edited as Come The Night.  That must be one hell of a weird read!  Essentially, I figure if you cut out the hardest violence and sex scenes you end up with a pulpy semi-giallo with a prostitute and a journalist chasing after a murderer.   Still, it is curious and equally hard to find!
Also, the persistent rumor that even the final release was censored is something Hutson says has no merit.  The scene in question is supposedly a "violation by chainsaw" but that pretty much happens in every scene with a saw anyways.  However, if I was a betting man that wore a tinfoil hat of conspiracy loving I'd be more interested in what happens at page 105.  Edward gets a second prostitute, that has already figured out that he murdered the earlier victim, and brings to bear his favorite drill.  The scene jumps and reading it made me think of the advent of Japanese Laserdisc prints being sold and passed around filling in lots of splattery breaks in Italian horror films.  Check it out...
He stood mere inches from her, his swollen penis throbbing between his legs, the drill hummed loudly on low gear, then he flicked a switch and pitch intensified as he turned the lethal tool up to full speed.  He levelled it, the bit-spinning at over 3500 RPM-aimed at her right eye...
Edward switched off the drill and dropped to his knees before Amy's now lifeless remains.
There are a few guns on the table for the author here...and given that NOTHING has been held back it is a rather jarring jump past some obvious bad behavior.  A case of an author just figuring that they had already done enough? I wonder... not that I'm complaining, because it is pretty damned nasty, and again, this is just part of a scene.
For a bit of insight into the cuts / manuscript issues from the man himself-check out this tidbit from the 2008 questions page on The Shaun Hutson website found HERE.  The question asks about the supposed censoring and Clive Barkers reported reaction to Chainsaw Terror.  Bonus points to Shaun for being exactly the guy he is here...you have to love an author like this...  I know I do!
There was an original (as in typed and coffee stained) copy of CHAINSAW TERROR around a while ago but that's it, Colum, I'm afraid. Where did you hear of this edition by the way, on another website? I'm curious...The scene you refer to caused Clive Barker to call me irresponsible at a fucking convention many moons ago. My reply; "Irresponsible? That's rich coming from the cunt who made a piece of shit like Hellraiser.." Not the usual literary response I think he'd been used to...but there again, don't question me if you can't take an honest answer...Neil Gaiman got the same thing many years ago when taking the piss out of SLUGS late one night in a hotel bar. I warned him I'd tip him out of his chair..he kept on..I tipped him out of his chair...He wasn't happy...twat. Good luck finding CHAINSAW TERROR..
Find it. Buy it. Get tipped out of your chair.  You won't see it win any awards, but it joins Eat Them Alive, Bamboo Guerrillas and Ninja Master: The Skin Swindle on my short list of triumphantly sleazy novels that I love.
Posted by David A. Zuzelo at Monday, October 25, 2010