Craig Ledbetter and his zine EUROPEAN TRASH CINEMA changed my life.  So, I'm digging through crates and what pops up but a bunch of ETC mags amongst others!  Time to look back, to 1990--20 years ago!--and take a look at some of the mags that shaped my cinematic obsessions.  Chas Balun made me a bigger and weirder horror fan (and more rabid-he was the tainted blood in the pies ala I Drink Your Blood)-but Craig's editorial guidance made me a trash cinema fan.
So what was ETC Volume 2 #1 full of?  Great lines, intriguing titles that were a whole lot rarer and harder to find back then and some really important key information that got me started.  There is even a film in there I still haven't found after all these years!! 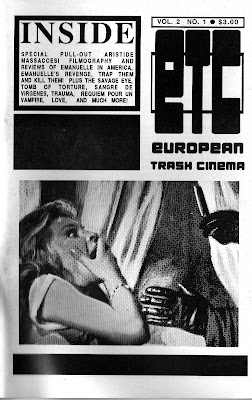 Starting strong, Craig pledges to cover only European films--and bemoans the glory years of the 80s video (wow, I bet we'll be doing this in a few years when the 2000 to 2007 BOOM in Eurotrash on DVD is a memory and the porting to Blu Ray is finished on the key titles that may make money).  The credits feature layout by Kronos Productions (Monster! International overlords Tim Paxton and Dave Todarello) and a list of contributors that include Steve Bissette, Marshall Crist, Mike Secula and many more. 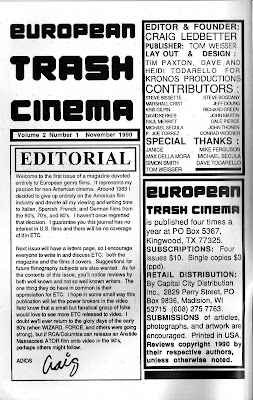 The first reviews include Deadly Obsession / Devil's Honey getting slammed by Kris Gilpin. Hey, I love this film-but Fulci also takes it on the chin here.  The Creature With The Blue Hand gets a bad review, though it is mentioned that this is the US version under scrutiny.  The later released double DVD issue may have helped.  The real meat of the issue that stands out for me is Craig taking on Emmanuelle In America.  He covers the UNCUT version and mentions the snuff footage in graphic detail and mentions the rumor that David Cronenberg may have been inspired by this to make Videodrome!  Craig mentions "It's entertaining shit, but shit nonetheless."  And this is the start of my real love for Craig's writing.  He would slam something, but I could not have cared less. The trails he was blazing, regardless of opinion, were always as interesting as the reviews.  I ended up writing him to get a copy of this film and that was my first chance to interact with Craig. He warned me, but my opinion was vastly different than his!

Now I have a nice Emmanuelle In America DVD and I'll always love the fact that Craig thought Gemser has "all the sex appeal of a booger."  Now I put up Casual (un)Dress Fridays featuring Laura!
The Alberto Negrin film Trauma gets slammed by John Martin, Insanity (never seen this) gets a "Don't waste your time." and Matador gets a fun review by Dale Pierce that sounds good but I've yet to see the film.
2 other standout reviews are Phantom of Death (I dig this Deodato film) and Marshall Crist taking on Requiem For A Vampire. This review inspired me to watch Rollin films and I've become VERY familiar with them since.  Mike Secula writes an excellent review of Sangre de Virgines and taught me who Emilio Vieyra was. 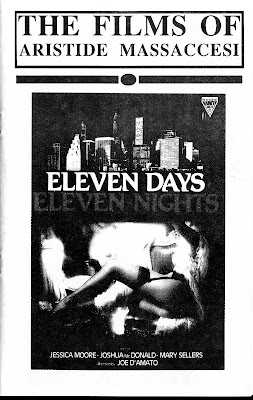 There is a break at this point for THE FILMS OF ARISTIDE MASSACCESI!  I'm glad for Craig this was before the man's total domination of the EuroPorn scene (which won him an AVN award)-because there are hard and soft editions of those and WOOOOO they would be tough to have to type up and put in a zine.  This mag would have doubled in size. It is a good overview and mentions THE FILM I'VE NEVER FOUND titled Prison Dancer / Can't Shake The Beat.  Bill Connolly gets a nod for Spaghetti Cinema being instrumental in making the section possible.  There is a great HORRIBLE image that takes up a full page as well. 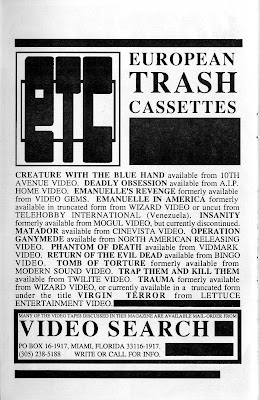 Then we get an add for VIDEO SEARCH BLANK BLANK. This must have been before MIAMI came in to play-and also to perhaps cover up Pompano Joe's real involvement.  As an aside, has there ever been a bigger bootleg movie operation in the US?  You can argue the quality (from OK to holy fucking shit I paid 25 bucks AND a membership fee to watch a Franco movie washed out in Black and White and looking like it was projected on an elephant scrotum AND it is taped over a family...fucking...picnic???) -but man, they had it all.  Owner Tom Weisser would be revealed as Pompano Joe of course, and it is funny when he bemoans the dreaded video killing drive-ins and then sold video upon video--but whatever. I wonder if my membership fee still stands with the current owners of VSoM?

More reviews!!  Return of the Evil Dead (this and Deep Red Horror Handbook made me a Templar fan-now I have a Blind Dead comic coming out at Halloween!), Tomb Of Torture (eh) and an excellent dissection of Emmanuelle and the Last Cannibals / Trap Them And Kill Them by Steve Bissette are great reads. David Kerekes also tackles Emmanuelle's Revenge in this awesomely D'AmatoCentric issue!  Finally we get that Pompano Joe column on some Mondo Films (not my bag) and takes Craig to task for the "booger" comment in a nice moment.

The issue ends on a News From Spain by Dale Pierce that mentions a new Naschy film in the works...

All this for 3 dollars?  A great issue and I'm sure my Joe D'Amato fascination started here.  Craig had a great way of rounding up writers that brought passion and love (or scorn) with their words.  But ETC had that special gift.  I didn't care if it was the "best" or "worst" magazine, the writing and images dragged me away from Fangoria and slasher fever and 20 years later this zine STILL has me reading it.  And still wanting Prison Dancer...  One of the giants, European Trash Cinema will always rule.
Posted by David A. Zuzelo at Monday, September 27, 2010

I have a prerecord of INSANITY, but I'll be damned if I've come across PRISON DANCER!

Back in the 80s and 90s, going to my PO Box each day was like some kind of twisted Christmas morning. You never knew what kind of damaged media was going to turn up and on those days when an issue of ETC or VIDEOOZE or SLIMETIME or GORE GAZETTE or CRIMSON CELLULOID or MONSTER INTERNATIONAL or NAKED, SCREAMING, TERROR was in there you knew you were in for some good reading, obscure info and great laughs as you devoured it over some beers. Funny that 20 years later some of these crazy zinesters are still good friends!

Two days ago I relived those happy days going to the letterbox! I received two issues of MONSTER INTERNATIONAL, ETC #1/vol.2, and PHOTO FIENDS #1, from one nice Mr Paxton. Awesome!!! :D