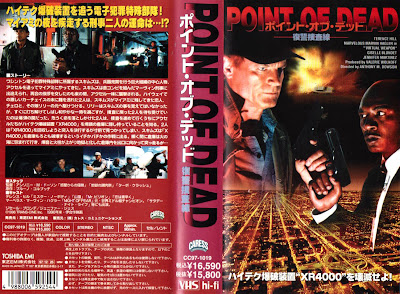 While scanning my Japanese VHS covers I found myself waxing nostalgic about some of these oddball titles. This review comes from Tough To Kill (available via Lulu.com or Amazon) and covers the bizarre Virtual Weapon which was retitled POINT OF DEAD if you listen to the Japanese. Antonio Margheriti made much better films than this, but there are parts where his style shines through and makes this an amusing entry into the EuroAction canon.

“I heard your house blew up!”

While Virtual Weapon was made well after the 80's sputtered out it's last dollop of hairspray Antonio Margheriti's final feature film is well worth noting for fans of the Tough To Kill genre. Mixing Minicars and Train battles with guns and punch-ups along with Terence Hill's ability to mix action and comedy, this flick is a very enjoyable time killer. Picture Heartbeeps via Miami Cops and that should either seize your interest or send you scurrying away in fright.

Right off the bat we meet Skims (Terence Hill) and Mike Davis (Marvelously Mumbly Marvin Hagler) as cop buddies. Skims is returning to his old Miami stomping grounds as a special agent out to catch a black market explosives dealer named Axel (who cleverly hides behind the name MR. X!)... so of course his house is blown up in the opening minutes of the film. The aforementioned added bonus of a great Car/Van/Train chase sequence done in miniatures thrown makes the film worthwhile before the first act is over. The ACTION MAXIM of Don't Mess With Mr. X applies as always. After Skims re-unites with his old flame Chelo (Giselle Blondet) and makes friends with her daughter (who doubles as a young computer wiz), it's all out tough cop war as Skims and Mike take the action buddy buddy route to punch out baddies while tending bars and yes... even shaking some maracas!

Good to see Hagler still has hand speed on his side, even if he can't properly say “satellite dish!”

When Mike figures out the supercop status of Skims (“You aren't a regular cop, you're the man!”) they corner the evil Axel. The fun comes to a halt as Skims can't escape an explosion he sets off to trap the baddie and is killed (???)

Well, the fun actually starts here. What plays as a typical 80's copper film suddenly goes berserk as Skims revives himself through a computer game (fighting dinosaurs) and becomes (I'm not making this up...) The Invisible Avenger! Yeesh! Thankfully if a character tells Skims they love him then he is visible to them. Marvy Marvin really pulls it together to declare his undying cop/man love here in a moving moment. But enough sentiment, Skims is now hopping through phone lines, playing with his old boss, and battling the forces of not so good but non-threatening evil guys as a digitally groovy ghost.

When Axel is brought low by the invisible man he questions the following quip best summarizes the charm of the film.

Hovering Gun in Skims' voice: I bet you didn't know I could talk.

Happy twist endings ensue and Marvelous Dancing Marvin Hagler takes us out under the credits!

Virtual Weapon is a strange hybrid of Tough To Kill and Family Action/Comedy that benefits from a director that knows how to not only handle the action sequences with his own special touch but works well enough to get a solid Terence Hill performance and even eeks out a few funny bits from Marvin Hagler (I think Antonio Margheriti was a genius and his ability to do this is proof in my book). Obviously low budget, the film barely appears to be made in the 90s by it's look and while it certainly isn't a balls out blastathon celebration of Margheriti's career it is obvious that he was putting an effort forward to have fun and make the film entertaining. Buried beneath a ton of hokum with the Shocker styled body jumping as well as the nonsensical plot of liquid explosives going to powder and being exploded by means of classical music is an action film completely devoid of serious intent and loaded with fun with some very funny comedy moments scripted by Bruno (Miami Supercops) Corbucci.

Aside from the technical high spots of model mayhem and Hill punching out guys with Trinity like ease, the film also sports a nifty and different electronic score by Carmelo and Michelangelo La Bionda.

Fred Anderson said...
This comment has been removed by the author.
7:01 AM

Ah, I always wanted to see this one! Mostly because it's the final (?) movie of Margheriti. He was the master of slick, expensive-looking italo-action.

I always thought it was strange that he never took the step over to Hollywood, because he had that commercial quality that most other italian directors didn't have.

Man, where are you finding these movies? I'm going to be addicted to your blog now...lots of reading to do. Glad I found it!
-Billy

Hi Billy, finding all these was a real task, but fun. My partner Paul and myself scoured the globe looking for Japanese VHS-which is where this stuff seemed to really sell. The Tough To Kill book was built off all that searching (and spending...ah the spending...) Hope you find lots more to read.
I agree Fred, Antonio was a fantastic film maker.