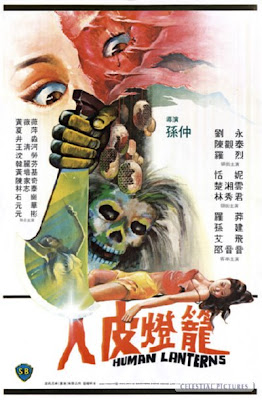 I've been on a Brucesploitation kick of late, and that always gets me missing my friend Sifu Linn Haynes. I've recently found all of the remaining Tomb of DVD / Cave of Kung Fu original files and wanted to share this review. Written in 2003, it does not take in to account the most recent DVD release-but contains lots of gems about the film. Enjoy!

In 1974, the Shaw Brothers attempted an experiment with Britain's Hammer Studios to make a kung fu film using Hammer's gothic horror style. They co-produced a Kung fu/horror hybrid set in old China entitled Legend of Seven Golden Vampires. The film was not a big success and the Shaw Brothers turned their back on the sub-genre, choosing instead to make more
straightforward horror and supernatural films set in modern times. Years later in 1981, Golden Harvest's Encounter of the Spooky Kind was so successful at the box-office, the Shaw Brothers got back into the period horror genre. Returning to the style used previously in Legend of the Seven Golden Vampires, and adding a touch of wuxia (swordplay) fantasy to the mix,
they made a string of period horror films beginning in late 1981 with Revenge of the Corpse. 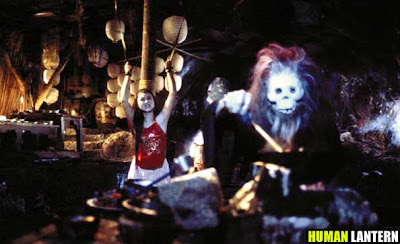 While Golden Harvest chose to "cut" their films with comedy, the Shaws went a different route by upping the action and horror elements. They had a valuable weapon at their side in I Kuang. Besides being one of the most prolific scriptwriters in the history of Hong Kong cinema and writing the majority of the Shaw Studios output, he also was the most popular horror author in the country. He created among others, the famous character of Wesley, who has appeared in countless books and films. With I Kuang's talents, the studio made horror films the opposite of current trends. Where Golden Harvest had laughs, the Shaw Brothers wanted gasps; where Golden Harvest had hopping vampires with simple make-up, the Shaw Brothers had grue to spare. Yet they were less than successful. These films were not the box office draws they expected and Revenge of the Corpse was the highest grossing film of the group. Human Lanterns is probably the best known of these Shaw Brothers horror films due to its availability for past few years as a bootleg. With its recent release on DVD by Celestial, the film can be seen in a different light from that of a cramped, badly subbed Taiwanese release. One of Lo Lieh's best performances, along with some better than average fight scenes, make it one of the best examples of this unique sub-genre. 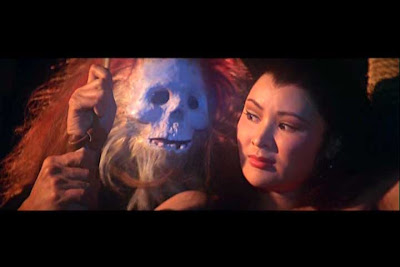 During a party at his estate, local businessman Tan Fu (Chen Kuan Tai) brags his lantern will win the upcoming contest at the village festival. Tan's rival, the swordsman Lung (Liu Yung), decides to also enter the contest to embarrass Tan. When Lung asks in the village for a lantern maker, an old man tells him of a strange hermit named Chao Chun-Fang (Lo Lieh) who lives in a
hut in the forest. Lung finds the man and asks Chao to construct one of his famous lanterns for the swordsman to enter in the contest. Unfortunately, Chao has a grudge to settle with the swordsman. Seven years ago, Lung defeated Chao in a duel, ruining his life in the process, and he has been waiting to take his revenge ever since. After a trio of disappearances for which he is blamed, the swordsman discovers how the hermit makes his wonderful lanterns, by using human skin.

Though it has exciting action and horror to spare, make no mistake, there are no heroic deeds here. The story strives for a downbeat style, and delivers in spades. As the "hero" of the film, Lung is fairly unlikable, as are the supporting players. This is the most interesting and bothersome aspect of the film. With such a strong villain doing heinous deeds, the film needs an equally vibrant hero to balance it. Yet the viewer is stuck with rooting for Lung, who is selfish and egotistical to a fault. So much so,when he finally sees the lanterns mentioned in the title, all he can think about is how beautiful they are. It?s also ironic that everything Lung has gained by defeating Chao is squandered by the time they meet in the film. This is hardly the hero the film needs and is it's biggest weakness. The businessman Tan Fu isn't much better. At first Tan appears to be someone whojust puts up with Lung's antics, only later does the viewer learn he is far from the innocent businessman he pretends. The finale of the film hints at growth for both characters, yet at a terrible cost for each. The villainous Chao appears in the beginning to be a tortured soul who has lost all everything to Lung. When Chao later transforms into a walking nightmare: a creature dressed in an ape costume with a skull mask, he becomes nothing more then a vessel for his own rage. 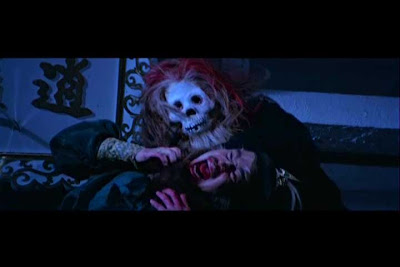 Director Sun Chung (who also co-wrote the Human Lanterns script) is better known today as a director of kung fu films. Despite appearances to the contrary caused mostly by only his action films being generally available, Sun was adept at directing nearly any genre. He directed quite a few horror and exploitation films for the Shaw Brothers Studios, including their remake of Jack Hill's Coffey, The Drug Connection (1976), and the aforementioned Revenge of the Corpse. Often lauded for his style of using wide angle shots to show actors engulfed by their environment, Sun was also known for being one of the pioneers of the steadicam in Hong Kong cinema. Though his near total reliance on it in many of his films occasionally made the camerawork appear rushed, the images he obtained using this camera made his films unique to most directors during the period. The prowling camerawork found in Human Lanterns for example, with the viewer seemingly moving effortlessly through caves and pagodas, is something to behold. Sun also perfected the use of the camera combined with slow motion during action sequences. He utilized this to great effect to slow down actors, achieving a bug's eye view of fight scenes by setting the camera within the action. This technique lets the viewer catch nuances of a fight not apparent to the naked eye such as in the wine jug fight between Tan and Lung. The director uses these ideas in more impressive fashion during the scenes of the villainous Chao stalking his prey. The level of unease Sun creates with his quick cuts and slow-motion during these dreamlike sequences of the killer in his mask and ape suit, combined with an evocative soundtrack, is quite effective.

Though he is often seen as a visual stylist, Chung was not afraid to wallow in sleaze, and this film is gruesome. It's chained women and skinning scenes are certainly not for the squeamish. These scenes are still among the most inventively evil in the Shaw Brothers canon. Human Lanterns is oppressive and often reminiscent of Italian gothic horror films of the late 60s and early 70s, with their colored lighting and garish visuals. The gold, blue, and red lighting of many scenes give the film a dark, fairy tale atmosphere. This is particularly noticeable in the amazing set of Chao's lair. The underground mill with its wooden wheels greased with blood is as memorable a setting as can be found in Hong Kong horror cinema.

The fight sequences, choreographed by Tang Chia and Huang Pei Chi, are reminiscent of their work with Chor Yuen. Their signatures involve employing an array of unusual weapons, slight wirework, and groups of combatants that work well with the film style. The fights in this film are inventive, from iron fans, to a battle with an urn of wine. Always one to improve on
weaponry, Tang's tonfa/twin lion hooks weapon which Lo Meng uses is particularly inspired and accents his mantis fist forms to perfection. The use of colored fans as both weapon and decoration by Tan's guards are visually impressive, and a direct bow to the wuxia genre.

In the acting department, the film belongs to Lo Lieh. Though well known stars at the time, Chen Kuan Tai and Liu Yung (also known as Tony Liu) are serviceable in their roles as the two rivals, but the actors lack any true chemistry on screen. The only other actor that really registers is Lo Meng's assassin character, who is suitably mysterious and seems to be having fun in
what amounts to a cameo role. Sun Chien's Constable Pan is wooden, and for the most part he's just there to take up space. In comparison, Lo Lieh's performance finds the actor at his best. If not for his character and ability, the movie might sink under the weight of it's own excesses. Lo Lieh's tour de force performance should remind viewers why he was considered
a solid character actor in Hong Kong cinema. Though faced with a role he's played many times, Lo Lieh throws everything he has into the part. The wildness of the character in his ape costume, with his animalistic movements and feral imagery, complements Lieh's insanely manic performance out of it, to create one of his most memorable characters. The scenes when he tells the women what he plans to do to them are sadistic. When one of them offers to sleep with him, he responds by slapping her, then ripping the skin from her back! Whether it's in these moments, or the maniacal glee when he hops around looking at his handiwork and exclaims, "What a beautiful mole" his performance walks the line of horrific and camp with expert grace.

By the release of Human Lanterns, the Shaw Brothers insistence on flooding the market with whatever was popular at the time, quickly killed off any demand for this product. The Shaw Brothers version of these horror hybrids holds up fairly well today. For a viewer used to the often-irritating comedy found in most Hong Kong horror, these movies will be a welcome surprise. They have an eerie atmosphere rooted in the fantasy elements of the wuxia films, and still retain their ability to shock today with their serious take on horror conventions. The dark qualities of the film, along with the acting of Lo Lieh and the swordplay elements, make it slightly more interesting to watch than the average action film of the time. Though it is a little uneven, likely due to a horror film's pace being attached to a swordplay framework, the film and it's villain have a fission to them that grips the viewer in a way few Asian horror films manage.