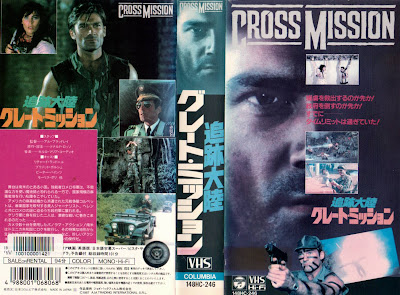 “How could you believe that one man alone, even a superman, could be victorious against a fortress?”

No sane person has accused Alfonso Brescia of creating “good” movies but for those who love their films cheap fast and weird, the man is an icon. I love finding a new one to watch, or even revisiting his greatest hits-and Cross Mission is incredible entertainment. ONLY Alfonso Brescia could make an 80s EuroAction flick like this! To put it simply... As War Of The Robots is to Star Wars, Cross Mission is to Rambo! 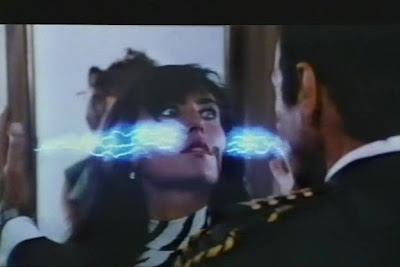 As General Romero (Maurice Poli) sets forth to prove his tiny nation truly does hate the drug trade, that we just know he runs, he demonstrates his military might on the “death plantations” in explosive fashion. But it just doesn’t seem right. United journalists from around the globe, who all happen to speak English of course, demand an audience with Romero to get the details. This includes sexy and feisty Helen-a gal reporter with a beautiful body and some fists of fury to boot. Catching her eye is William Corbett, a man of action that not only knows the General well, is also supposed to help him. He is a badass fighter as he demonstrates immediately as well. William tells her all about the bizarre Romero, not only is he a dictator but a BLACK MAGICIAN who can summon a TINY MAN called Astaroth. Uh, and that little guy can zap people with his mystic beams!

What? Well… thank you Al Brescia, this is something different. 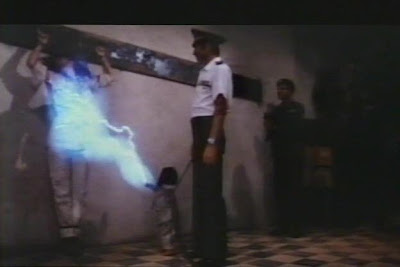 The two end up crossed by Romero, join some rebels and blow the hell out of everything and everyone that looks vaguely bad. Bridges explode, micro-mini monsters zap and twitch, more bullets fly and a final satanic showdown is afoot! 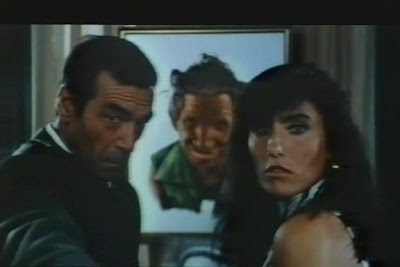 To really “get” Cross Mission, you have to accept that the name Al Bradley is in the credits and conventional gloves are off. The movie may slow down in spots, it may be poorly made and it could be colossal waste of time, but sometimes Al got it right. This film is loaded to the top of the evil Astaroth’s head with bizarre dialogue, lengthy sequences of walking and driving, strange twists and silly “special” effects, making it one of the more unique entries into the Italian Action Genre. Brescia doesn’t exude style by a mile, he instead pours on strangeness to try to abate the boredom of the long transition sequences. The leads are wooden to say the very least, though certainly competent. All the rebels wear headbands and the explosions are lifted from Bridge to Hell, which was also produced at A.M. Trading by the king of recycling, Ettore Spagnuolo, so the standard conventions do get met. But it is impossible (for some admittedly) to not enjoy a movie that has little Nelson de la Rosa of Ratman infamy simply appear and disappear without so much as a poof of smoke at seemingly random times. Plus, it contains an amazing reaction shot of Maurice Poli in a death sequence… I don’t think it’s what he will want to be remembered for, but it is now etched into my cinematic memory. 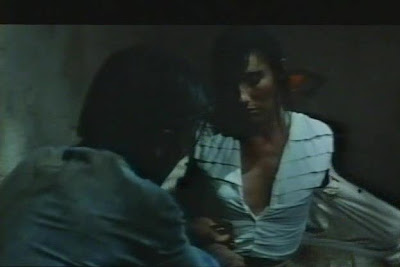 A smattering of action scenes, black magic terror, demonic midgets, recycled Stelvio Cipriani music and a load of people being shot up and stabbed in the name of adventure and entertainment… Cross Mission delivers that in it’s unexpected package, and is a nice diversion for those who want to walk on the fringe of the fringes of Italian Cult Cinema. It’s a narrow ledge, but if you don’t slip off it, you’ll say Viva Brescia…hail Astaroth! 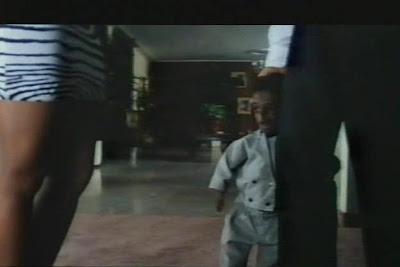