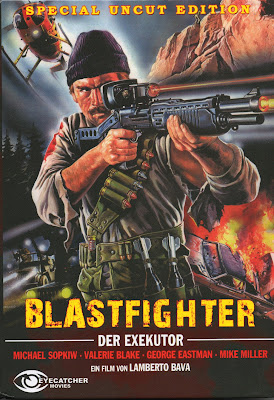 I just saw the artwork for the new release of BLASTFIGHTER on DVD and as always, I'm excited to get another version in my collection. So, here is the artwork and my review from the book TOUGH TO KILL-THE ITALIAN ACTION EXPLOSION. Yes, you can still get Tough To Kill if you need a loving tribute to the action films of the 1980s that smashed huts and busted guts across the silver screen (or VHS tapes) during that Rambo Ravaged period.

Dig in...and by all means, if you have NOT experienced this great Lamberto Bava film, do so now. Also, don't forget that Micheal Sopkiw will be appearing at Chiller Theater. Also, you can listen to an audio version of the Bookgasm review for Tough To Kill at this link. That just cracks me up!

“You wanna know who I am?? I’M A SONUVABITCH…who wants to be left alone.”

What starts as a simple tale of hillbillies up to no good escalates into ballistic balls out mayhem, living up to a title like Blastfighter in Lamberto Bava’s only pure action outing. For real. Seriously.

We meet Tiger Sharp as he walks out of jail and it is clear that he has revenge on his mind. After acquiring a (bizarre) tricked out SPAS Shotgun that comes with a variety of missiles and has a scope, he sets out to kill the man who sent him to prison… and more. However, Tiger decides to leave the road to revenge behind, retreating into the backwoods of Georgia for solitude. Upon arriving however, the local boys push him to the limit straight away. Certainly he isn’t a rabid killer, but a man can only take so much-and he smashes heads. However, old friends resurface, and he finds his once upon a time pal Tom (George Eastman) is now the big man in town—but when it is revealed he is sanctioning the mass slaughter of animals for a Hong Kong butcher’s dissection needs, Tiger doesn’t like that… no sir, not at all. Complicated by the arrival of a beautiful young woman (you’ll guess the connection they share straight away I’d bet) and some other hillbilly scuzzbags, everyone gets caught in the crossfire until Tiger has to unleash his inner beast and become a man no more… a Blastfighter reborn!

Sure, it sounds silly, but Blastfighter is not the average action fare. Stacked with talent behind the scenes and using more dramatic pacing, more heavy gore effects and good performances from the cast, it all adds up to a great 91 minutes. Lamberto Bava, who sadly always seems to be qualified as the great Mario Bava’s son before discussion of his own work (I just did it) proves that he can handle genres outside his normal horror/giallo stomping grounds. Lucky for us he doesn’t leave the flourishes of those styles out of the proceedings! Tiger’s wife is killed in the brutal Italian crime/horror way, harkening back to A Blade in the Dark, and when it comes time for the bullets to strike, they do so with Demons styled splat-tastic aplomb. Bones break, arms fly and full body explosions occur with regularity. Restraint in the early going makes the finale all the more satisfying, and the viewer is ready for the payoff that Lamberto provides with gusto, gore and gruesome violence. 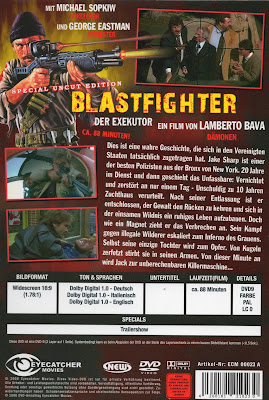 The story behind the film goes that Blastfighter was a title that was pre-sold to distributors, but as the original science fiction project was collapsing the always reliable icon of Eurotrash Cinema, Dardano Sacchetti, was called in for a quick rewrite. While the film may now be slightly misrepresented by the title, seriously, does BLASTFIGHTER really sound like a backwoods action flick? The trick of keeping that big gun in the back of the viewer’s head until the blastfighting begins in the final act is pulled off surprisingly well. The dialogue may get hammy at times, but in a very lovable way. Listen for Sopkiw to call out for “balls” more times than the legal limit should allow. 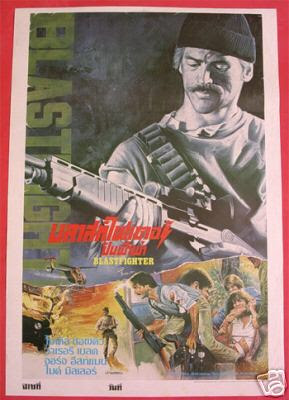 Highest marks go to the the cast led by the great Micheal Sopkiw. Now sporting a moustache, he grins, groans and blasts his way through every scene with the greatest of ease. Sopkiw emotionally punches trees and sets bones like a champ, a shame he didn’t appear in more films, I could watch this guy blow up the bad bastards of the world, be they backwoods or post apocalyptic mutants, every day. George Eastman is always a positive and provides a nice, almost subtle, rival for our hero. Valentina Forte is great as the ball busting girl as well, earning the exclamation of “good golly Miss Molly” that Tiger whispers her way.

Boasting a score by the De Angelis Brothers (an excellent one at that), replete with Georgian “accents” and the repetition of The Bee Gees “Evening Star” as covered by the band tommie baby, you’ll be humming along with the Blastfighter as he literally obliterates ALL of the scumbags he can lay bullets and bombs upon.

Yeah baby! I've got this on my "To Do" list today after I'm done writing and I'm excited to the point of shitlessness! Dude, where the hell is TOUGH TO KILL 2?!!

Ah yes...TtK2. Well, I think there is something Cooke'n that I'm thinking of Deving (urr..Diving) in on. That may speed the process along ;)

Right now I have to concentrate on the GNS book for sure however.

Blasfighter is one of the best of Lambertos movies and a great role for Sopkiw.

Of course you can read my interview with Sopkiw here:

That is a great interview Fredzilla!

I ordered the new german DVD today, so I hope it will arrive soon. I've only seen it on fullscreen tape, and I'm dying to get a good look at it again.

Thanks to you Mr. Z I am a card-carrying member of BLASTFIGHTER Nation. Great flick and totally not what I was expecting after looking at the box for many, many years. BTW, just had a chance to check out the RoboLouis review of TTK... awesome. There used to be a program called MacSpeak (or something like that) wayyyy back in the early days of the Mac and my pals and I would be endlessly amused by feeding in Rollins "poetry" and other jibberish... amazing that it sounds like the same damn voice 25 or so years later!

Sorry to say but I was very disapointed by BLASTFIGHTER.

Sure Sopkiw and Eastman are always cool but this movie bored me.