Once a year my family goes on a retreat...and this year I had one entire evening alone in my new home. What better way to enjoy it than to hold a movie night full of trash cinema? It had been far too long since I did the TrashGrind Marathon workout. So, here is what I watched...while some may hang out and drink beers or other cool substances, I was fueled on a non-stop drip of Coffee and Milano Cookies.
Hey, I have little kids and those Milano Cookies are too tasty to share-have to eat them while I can. 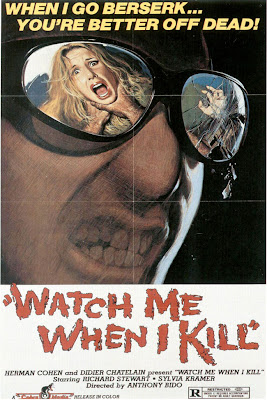 Watch Me When I Kill
This Antonio Bido giallo film gets little praise-and that is probably for a good reason. It is fairly slow and cluttered up with details that really have no impact on the plot. However, there are a few upsides that make it worth watching. First, there is a fantastic speaker rattling score by Trans Europa Express-the only one they would record. Eurohorror and Gillo fans will recognize Mauro Lusini and his distinct vocals (he worked with Goblin) right out of the gate-and this is equal to most Goblin scores easily. The onscreen antics are really slow at times, but they are fueled by a heavy psychedelic beat that keeps not only your interest, but keeps you awake! Bido did much better with his next giallo, The Blood Stained Shadow, but he certainly knows how to mimic the crawling camerawork of Argento here.
A solid C-Level Giallo film that is more for the trash completest than the casual fan may enjoy.


Four For All
Now this was the movie of the night! I'm a sucker for anything with Richard Harrison (see Sewer Rats), and Four For All is an incredibly fun Turkish/Italian production that is loaded with action at every turn. Tony Tiger (not only is this the characters name in the film, but Turkish actor Irfan Atasoy is actually listed in the credits by this name!) is caught up in a gang war issue that earns him a visit from some goons to his little home in the woods. Of course, he is out when they arrive and his wife and small son get beaten around for a bit. Once he arrives on the scene he is strung up in a position that made me yelp "Turkish Spider-Man!" and the family is killed. They try to burn down the home and kill Tony as well, but a lovely ex-gal of his (??) shows up to save him. As he heals up it is a Death Wish path of rage, but the gang had no idea that during "the war" Tony had 3 close buddies that would die, and kill, for Tony at any time. Even worse, those guys include Richard Harrison AND Gordon Mitchell. Serious ass is kicked for 70 minutes straight. Fist fights, gun fights, Tony Tiger Turkish Funingans...and one scene of Gordon Mitchell stalking his prey through city streets wearing only a towel. Below...a video of that scene, one of the all time best Mitchell ass whippings I've encountered.
I can't recommend this film enough-it is just a blast!


Bruno Mattei's ISLAND OF THE LIVING DEAD and ZOMBIES: THE BEGINNING!

I can't get enough of these two films. Shot back to back and basically one long film with two very different themes, the Maestro Of Eurotrash did himself proud in his final films. Back to back proved that I prefer Zombies: The Beginning because it is a little faster paced. In short, Island features some brick headed treasure hunters ending up on an island...of the living dead. The film is great fun because it feels like an expansion on the opening of After Death. The zombies are very traditional and the setting makes it feel like 1979 Fulciville all over again. But dumber and with much more consistent gore sequences. When the final girl escapes the island at the close of film one you don't get to breath a sigh of relief however, because she is picked up by a ship and taken home. Unfortunately there are some folks at the TYLER CORP. that want to go to the island.
Have any of you seen Shocking Dark? Bruno Mattei may have shamelessly cloned Aliens (in a basement) in that film, but it doesn't begin to cover the shot for shot grabs in Zombies: The Beginning! But, that ain't a bad thing because you get the mind blowing English dubbing I've come to love from the Paolucci produced Mattei films AND tons of gory nonsense. Flesh ripping is just the start-when you meet the throbbing disembodied organ in charge and his insulation linked undead baby farm you'll be standing and cheering.
Well, I was.
Everyone that loves euroTRASH needs these films, now if a domestic US release would happen things sure would be looking up. Watch the trailers and you'll believe that Bruno Mattei was ready to rock in his final days. Special bonus points for Yvette Yzon, who takes everything in these films like a trooper and does her best to sell the most outrageous bits with a smile on her face. 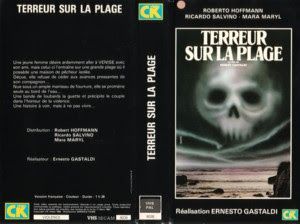 Lonely Violent Beach
When I think of Ernesto Gastaldi I don't really say "director," so it was with great interest I popped this DVDr in to my machine. And what a surprise it was! After setting up a typical quarreling lovers go to the beach to try and settle their differences things go off the rails in a most predictable fashion. A group of four bikers come on to the scene and dominate the husband and rape his wife, taking turns with her and humiliating the man. I was figuring it would be "Enter The Weedwhacker" soon enough, but Gastaldi defies the expectations of the viewer and goes an entirely different way. The gang members begin to quarrel and squabble as the wife and gang leader fall in love. Along the way things get very messy and everyone takes a stand-though not the ones you would predict. A small cast on a very isolated stage gives this one a play like feeling as the film becomes quite dialogue heavy. While that could be hard to balance, editor Attilio Cincioni and composer Stelvio Cipriani keep the scenes moving with their work. If you are looking for a berserk sleaze film, this surely is not it-but if you want to try something different and see how one of the premier writers in all the various Eurogenre films would handle a movie he would want to direct, you'll enjoy it. Best line of the night is delivered here as the gang leader, played by Robert Hoffman, tells the wife that she enjoyed her rape at his hands. Mara Maryl gives him a look that would actually circumsize a normal man and responds..."all the more reason to hate you!" It is a great, and powerful, scene and shows off Gastaldi at his best.

And after this...I slept and was quite content with a trip down the Eurotrash trail!
Posted by David A. Zuzelo at Sunday, February 08, 2009

Eep! Not just Bruno Mattei zombie movies I haven't seen, but recent ones? I have to admit, his movies may be generally wretched, but there's something appealing about them. I'm gonna have to seek them out.

Well worth your time to check them out! I'm thinking of changing the title of Zombies:The Beginning to SHOCKING DARK 2 from now on ;)