Mario Gariazzo of PLAY MOTEL and WHITE SLAVE, amongst other Eurotrash gems, directed one of the wackiest Alien Encounter films I've ever seen. But more interestingly, he makes a claim (under his pseudonym no less) that cracked me up during my first viewing of EYES BEHIND THE STARS! Check this out. 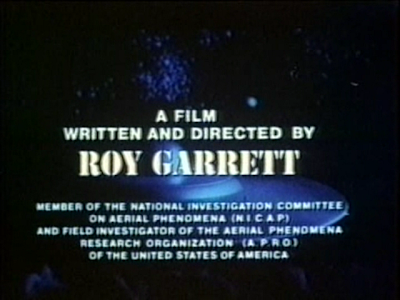 So, I nearly fell out of my seat at the start of the film. What follows however is a truly stunning bit of UFO-Sploitation from Italy that entertained and delighted me. After a photographer snaps a few photos and finds something weird happening he ends up being abducted by aliens. In graphic detail. What follows is 90 minutes of EurOddity that drags Martin Balsam in to the mix and gives us a really, well, interesting view of the insides of some flying saucers. I didn't say UFO because they are really flying saucers! I don't want to spoil your fun in discovering this one, but let me tell you this. If you have seen Play Motel and appreciated the off kilter take on Erotica presented there, then this is an equally off kilter Conspiracy flick.
I highly recommend the movie, it is both trashy and weirdly compelling. The freaky alien invasion stuff is accompanied by a cool synthoshocker sound and the cast does a good job at running about and looking perplexed and terrified at the same time.
And the aliens... well...here you go. 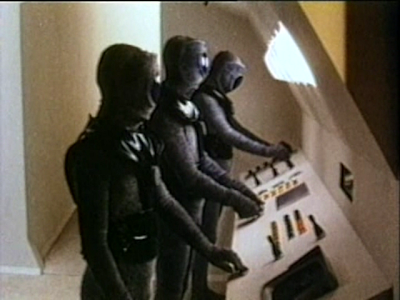 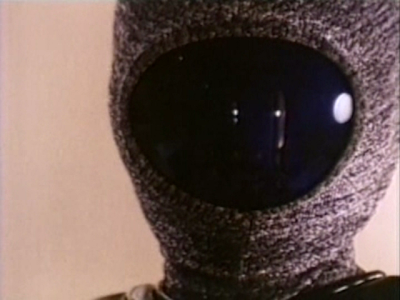 Wow!
But a few things outside of the film experience caught my eye. Was Gariazzo/Roy Garrett really using his own credentials as a UFO investigator? Was this some producers trick to make people think this film was REAL? Was Chariots Of The Gods really this popular?? Well-the answer to that surprised me. 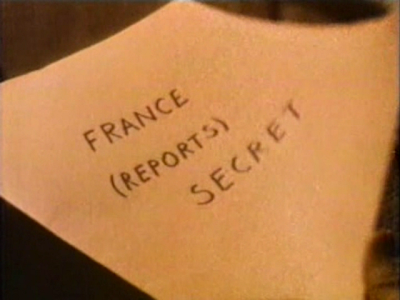 You can read up about The National Investigation Committee On Aerial Phenomena at their very own website! Check it out and it seems like the goings on in the film are just the beginning... or are they? I was a bit disappointed to see that Eyes Behind The Stars was not for sale however.
It turns out that the second credit of A.P.R.O. or Aerial Phenomena Research Organization is for another organization that is now defunct. I wish I could find a link between either organization and the film, but no luck as of yet. I do think it is safe to say that UFOlogy was a hobby for Mario Gariazzo-he not only made this mind breaker of a film, but returned to UFO territory in 1988 with Fratello dello spazio! I have not seen this, but hopefully that will happen shortly. Martin Balsam returns for this outing as well, so it should be interesting. Also, Gariazzo is listed as a writer for another space film made at the same time as Eyes... And it is a comedy! So, I'm hoping to find this one, and would be very pleased to see the same sets, and aliens, used.
I'll admit, it is a bit of a detour from enjoying the films, but not only was Eyes Behind The Stars a great trashy diversion that entertained me from start to finish, but learning that the director of White Slave and Play Motel was into UFO studies made it all the better. 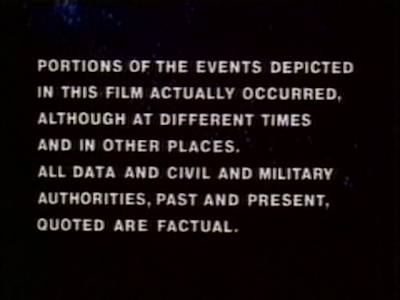 Gariazzo was/is a bit of a favorite with the guys from Nocturno magazine in Italy,i have one of the first issues from 1997 which has a big interview with him as well as another with a 3 page feature(including some behind the scenes pictures) on FRATELLO DELLO SPAZIO.

Love this flick. Saw it a few years ago when it came as part of one of those 10 Movies for a song packs from Brentwood.

I didn't realize this was on DVD anywhere, very cool. Stephen, this interview must be in Italian-but I'm still going to need to check it out. Thank you!

He also made a very off the wall and obscure Naples set crime film in 1980 with singer Pino Mauro called ATTENTI A QUEI DUE NAPOLETANI which starts off like a sci-fi with stock footage(a la ALIEN 2 SULLA TERRA)and then goes into 007 mode with Mauro as a secret agent nightclub singer.
I'm a big fan of these Neapolitan crime dramas/sceneggiata but this has got to be the worst i've seen!