HAMMERHEAD - A Tough To Kill Classic! 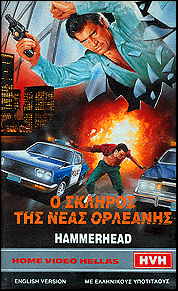 Hammerhead
1987-Filmustang
Directed by Enzo G. Castellari
With: Daniel Greene, Jorge Gil, Melonee Rodgers, Jeff Moldovan, Deanna Lund
Enzo G. Castellari brings the action again in 1987! More slow motion!!! Even more chases!!! Monstrously bloody bullet holes get punched through bad guys at every turn!!! While obviously shot on a restrictive budget Hammerhead satisfies action fans in every way possible. Even at this late stage in the Eurotrash Action Era Castellari can surprise and amaze, and given the films production pedigree, this may be a truly pure venture from the great director.After a quick reunion of ‘Nam buddies introduces Hammer—played by the always reliably solid Daniel Greene, it’s deep trouble for our man from the get go. And by calling Greene solid I mean THICK as a Brick With Iron Fists! Hammer doesn’t take crap from anyone and just exists to kick ass it seems, not to mention helping out old friends that suffer from some shadowy issues of the past. Hammer goes from helping his friend (who is promptly crushed in classic eurocrime fashion) to chasing a big sunglasses wearing hitman while screaming “MUTHAFUCKAH” before you even start to think this is an average action film. Before the viewer can settle in to a comfy chair the following unfolds: A car chase, a motorcycle sequence and one smashingly done slow motion shoot out! All delivered with maximum Castellari flair of course. Brilliant! 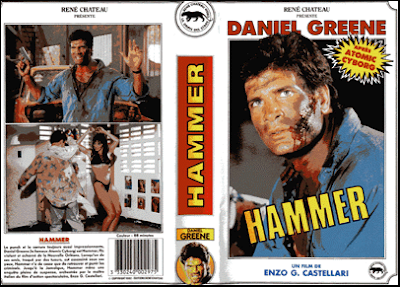 Following up on the squashing and chasing, Hammer is then revealed to be a cop. Dirty Harry couldn't even begin to clean up Hammer and his path of rage. After blasting up chunks of Miami and causing certain pedestrian injury to any poor sucker in his area, he decides to go to the Jamaican island his group--The Storm Riders--had worked out of in order to solve the mystery and get some old fashioned revenge. Hell, the police chief forces him to go on vacation, so why not kill a bunch of goons? Once he arrives, the all-important sidekick appears (a taxi driver now, of course) and the two of them meet the requisite girls, shoot up loads of bad guys, get into a Ferris Bueller-ian phone game with the local cops, abuse Jet Skis and save the day. But, as always, it isn’t as easy as it sounds. As the final reel loads up everyone is bashed, bruised, beaten or dead. You won’t look at table saws the same way after this one I assure you. 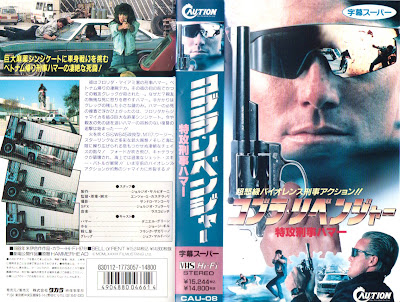 Hammerhead succeeds on so many fronts it becomes the shining example of why this book (Tough To Kill for all you True Believers - Dashin' DZ) was written. Enzo G. Castellari, a master craftsman of action most certainly, takes his best chops and applies them on this micro budget sized stage with great effect... yet the final product sadly remains lost in obscurity. Writing, directing and producing this time, Enzo indulges in a greatest hits compilation of his own work utilizing slow motion blood splattering, incredible car stunts and suitably vile behavior from the scumbags we are waiting for Hammer to flatten. And that alone would make for hi five star splashy entertainment, but Enzo doesn’t stop there. Sometimes a sense of fun can go a long way, and Hammerhead has that pounded out. Daniel Greene has the funniest “romantic” interlude involving flop sweat you’ll ever see (interestingly, he would later end up a staple in Farrelly Brother comedies such as Kingpin). Cabbie sidekick Jose (Jorge Gil) is hysterical in his grand and obscene exclamations and flirtations, quoting John Wayne at stupid times. Just the leads would be comedic gold, but when the addition of the non-actor factor is multiplied in, outright hysteria is the final solution. B-action fans will enjoy seeing Frank Zagarino as a creepy silent hit man with a penchant for water sports as well. Stunt Coordinator and familiar face Jeff Moldovan appears as well.

While action is the name of the game, Hammerhead is pure fun film bliss, a blend of carnage and guffaws. Listen close for a Guns n’ Roses “homage” musical riff during the opening car chase, because the bombastic score by Raskovich is 80’s cliché metal overload-and a welcome oddity amongst the usual electronic scores that were so popular.

Hammerhead is a smile inducing frag fest that will suit any fan of obscure European cult cinema.
FIVE EXPLODING HUTS
Posted by David A. Zuzelo at Saturday, August 06, 2016