Phantom of Death...Deodato made me look! 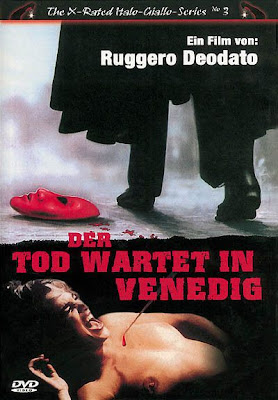 I gave the Ruggero Deodato film PHANTOM OF DEATH another spin last night, and I'm glad I did. It's got a funk that surprised me after not seeing it for at least a decade and having lots of Italian horror and thrillers under my belt since then.  While I'd be hard pressed to call it a truly successful horror film or giallo, it certainly is an entertaining slab of European Trash Cinema.  I was going to do a review, but I think there are enough of those on the web.  For the record I think it's a well done film that benefits from a strong cast (York is impressive as a completely FEEBLE killer at the end and Fenech looks beautiful), slick direction by Deodato, great music by Pino Donaggio, super special effects shot with style and a plot that manages to be interesting and unusual with it's utter lack of suspense.  And Donald Pleasence is great as the never catches a break and is always behind the killer by two steps Loomis style cop.  Check out some of the score...

There was one VERY impressive bit that I wanted to cover more of. Director cameos, especially in Italian horror, are something I really enjoy.  How many times do you say, "hey, it's LUCIO FULCI" when he pops up?  I do it EVERY time.  Now, when this disc was released in 2003 I might not even have recognized Ruggero Deodato.  Now we have Hostel 2 (heh, thanks Eli Roth) and his extended Cannibal Cameo.  Come to think of it, Deodato and Fenech are both in that film also!  Strange connection.
So, Ruggero pops up in a VERY stylish bit that plays into the trash nerd aspect of cast watching (and don't we all do that?) as he draws me into a moment of "hey that's Deodato...on a moped...holy...*CRASH!!!*"

The crash?  A great splattery giallo death scene that I didn't see coming because I was nerded out.  Here, check it out! 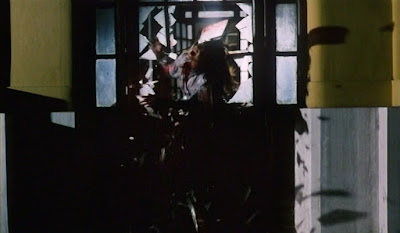 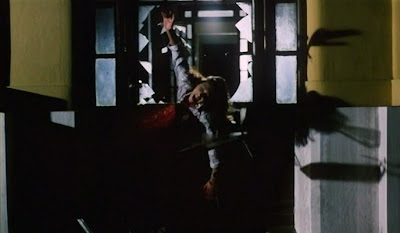 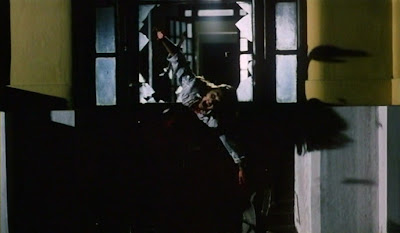 While I'm having fun with the captions, this is pretty high up on my list of utterly effective cameos.  Now that Deodato just leaps out as a fake scare as much as any black cat, the timing and editing on this scene were perfect.  While Phantom of Death may never be in the top 10 Eurohorrors, it sure has one of the better cameo scenes, and in the world of David Z Minutia, that counts for a lot! 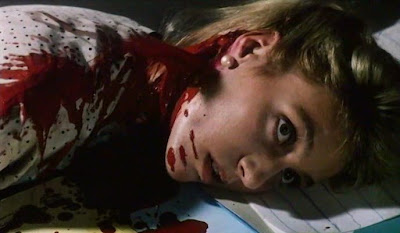 In case you hadn't heard it yet - RIP Jess Franco...