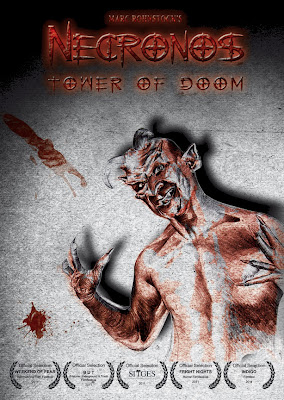 I've been a German Gore film fan for a long time it feels like. Back when I first read about Violent Shit 2 in an issue of In The Flesh (boy, that Schnaas guy seemed like a good dude!) these were not the easiest films to locate, but the tape network around the world was pretty good back then, if not a little expensive.  And Violent Shit was exactly as I'd thought it would be.  Energetic. Amazing. Awesome. Limited. Ambitious.  REALLY limited. But I never looked back and things really opened up when the DVD boom was well underway and all regions players opened up the world to stuff from SOI (thanks Timo Rose!) and German labels that were eager to splatter blood all over those little discs marked "Not For Sale Outside Germany."

Yeah yeah, I'm a rebel, I sucked up as much as I could locate.  When it came time to swap my writing from working for a company to my own site (Tomb of DVD!) the very first thing that was run was an interview with Andreas Schnaas (thanks to my amigo in action, Paul Cooke).  German splatter is everything I love about movies, or at least the idea of making movies. They don't really stray from what they do best, though each director brings his own perspective to things (as well as brand of humor, music and level of effects).
Recently I was thrilled to be able to order Olaf Ittenbach BLU RAYS in the US (Garden Of Love and Beyond The Limits no less) and get an official release of The Burning Moon as well.  And just as the Germans rise again on my radar, I see my pal NINJA DIXON--not a Shinobi of Splat Du Germany by the way--rave about a film called NECRONOS-TOWER OF DOOM on his blog I damn nearly freaked out.  Thanks to Fred and a few Facebook clicks it was a quick introduction to Lars Rohnstock set me up with my own copy to check out. Thanks to all involved I can say that the Rohnstock's and there merry band of mutilation warriors can proudly walk up to the THRONE OF TEUTONIC TERROR and take a place, because Necronos is 2 hours of pure splatter entertainment!  A throwback to the energy of the greatest films in that roll call of fleshy ruin AND a dark foreshadow to what can still be created...this is the one I've waited for. Yes, I've kept up with the main players like Schnaas and Ittenbach (I'll cover some films by them shortly by the way), but this was everything they once aspired to in 2 hours.
And they even brought Andreas along for the ride! 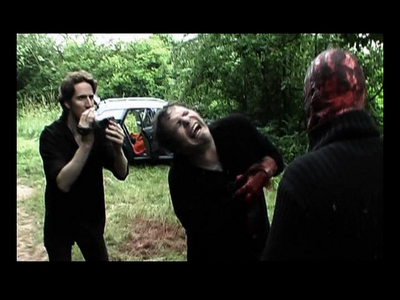 The film runs in several cycles to keep the blood and action flowing.  We start with a period piece showing how the evil wizard Necronos was brought low in gory Beyond like fashion during Medieval times.  His mission to demolish the world for his master, SATAN of course, gets cut short, but you can't keep an insane World Domination Dementor down, can you?  Hell, literately, no!  We've seen him at work, cruelly slicing apart victims as he embarks on a Naschy Mummy like quest to find The Chosen Woman who will be a great witch that could stop Satan!  Interestingly women shaved down in Medieval times... so, there weren't many burning bushes for Necronos to follow. Come to think of it, there may not be one pubic hair in the entire film.  Just sayin'...  Anyway.
So, bloody head chopping can't stop Necronos as we zip ahead to our times and he still has Satan on his back, potentially treacherous and seemingly none to accurate help in his awesome man servant GORAN and an insane WITCH (played with Vitriol, Vim and Vigor by Manoush) and some skin to slash and chaos to bring.  Cut to Goran going BERSERK while gathering up women to test as being the ultimate chosen one (and they better be virgins) as well as flesh to forge a BERSERKER for his master as well. 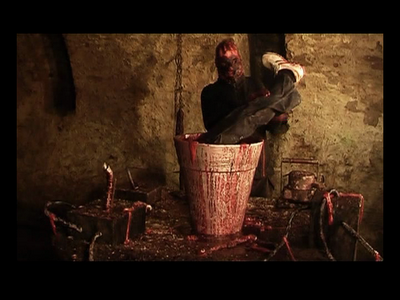 Things get messy as Goran chops, shreds and sifts his victims in all kinds of weird ways, ranging from simple sludging with sledges to an impalement that ups the ante on Cannibal Holocaust if not in the emotional stakes, certainly in the OH GOD THAT PIERCING IS GOING TO GET RUINED, GIRL way that it is intended to.  This isn't for all pay grades of splatter fans for sure, but it just feeds into the environment that Rohnstock creates perfectly. It's that insane metal album cover that sits behind the Screaming For Vengeance CD when neighbors swing by.
Does everything work out?  Well, not exactly.  REALLY late in the game The Chosen One appears to tempt the servants of Evil (yes, I nearly wept for poor Goran-not really, but I did say NOOOOO!), and things just might work out for us mere mortals.
Or...not. Does it ever work out in German Grue?  All flesh is subject to transformation, and it's usually painful when you pop in one of these. And Necronos is an ambitious jet black hooded figure, ain't he? 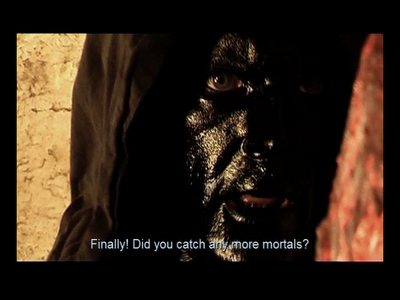 He has to answer to THIS GUY by the way... 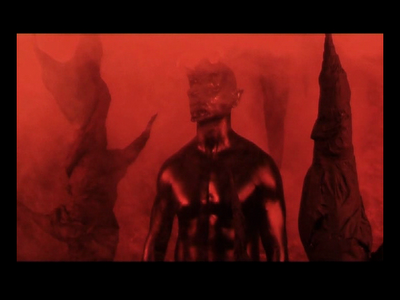 Necronos-Tower of Doom is really an achievement, and one that fans of this kind of fringe gore will enjoy.  It's also a testament to the fact that it can still be done with energy, enthusiasm and a daring length of reach that extends past the monetary into the utterly mad. It's inspirational in it's effort and I hope that not only the fans that will chomp this up see it, but that the upcoming release from Troma inspires that teenage RedBoxer to rip ahead into their own visions... And yes, you can make a film like this run 2 hours, surprise and shock your audience and even play with them a bit and offer just a bit of hope...only to have it drown in it's own blood!  It works, when it is done right. 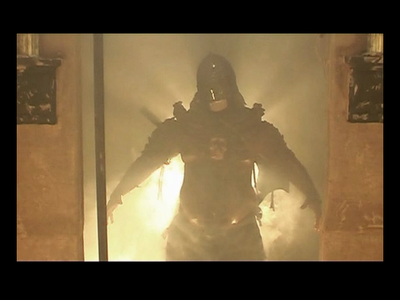 And Necronos does a lot of things right.  The cast is really strong, I especially enjoyed the interplay between Satan, Necronos and Goran. The earth bound pair have this sinister Dr. Orlof and Morpho vibe going on, as the servant seeks to do his masters bidding with drone like dedication.  Tossing in an overarching and time spanning mission for Necronos adds a strong sense of purpose for the unrelenting gore that the crew is splattering through the scenes as well.  It all just works, but it has a very odd effect that isn't unique to this German Gutripper.  Way back to Violent Shit, the cast of human characters are basically gristle for the machines of gutting grace and that continues here.  There is a fourth quarter hope shot for earth made up of one of the escaped prisoners and the chosen one, but I found myself pulling AGAINST them.  Necronos is the protagonist somehow, he has a lot on his plate.  I mean, he did promise world domination and he has to work with his help such as they are.  I mean, his Witch may or may not be even able to help him out, and he has little tolerance of failure!  Speaking of this sorceress succubus, The Witch is played really well, Manoush (who I am familiar with thanks to the Timo Rose films) balances that "hapless toady" with "sneaky Loki-like willing to bang the beast" manner really well.  You just know she is going to be in trouble, but you can't feel too bad because she is as vicious as Necronos when the time is right!

Also, you'll get a nice batch of cameo appearances that include Andreas Schnaas, Timo Rose and Andreas Pape.  Seriously, Schnaas as a snuff filmer out on a backroad meeting a monster that chops him up?  Irony in 2012!  Fans of the genre will dig it and all of these appearances made me smile as Necronos pays tribute to what came before and sets a new standard for what comes next! 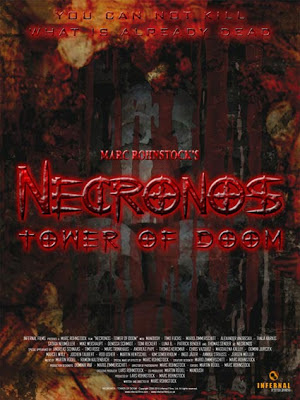 The music is outstanding and drips everything in a nice gloomy atmosphere of a crumbly castle full of monstrous mayhem and berserker rage, the images are strong and the make-ups are well crafted.  You'll ride along with one of the harshest and well realized independent gore films in years when you start climbing the stairs to the climax of Necronos' Tower of DOOM!  Be sure to do it.  Once you do, there are so many delights to shock your senses that you could look up. I know I will be on the look out for more INFERNAL FILMS right away.

Here is a censored peek at what lies ahead for the Tromatic release... I hope Toxie doesn't pull anything back from this release!!