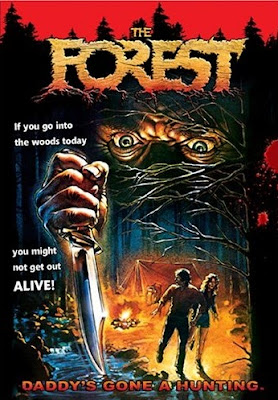 Now this was an unexpected treat amidst the carnage of HALLOWEEN HORRORS 2012... an early 80s slasher film that I had not seen finally popped out of the pile!  And it is a weird flick that utterly fails as a slasher, but manages to pull off a cross the genres flip with a ghost story that works to make it a horror film that is most Eerie Publications in it's delivery.  Cheap, slightly gory, very silly at turns, but I can't resist enjoying one that has me guessing as to the end AND crossing it as one of the few films that reminds me of my favorite Fulci film, HOUSE BY THE CEMETERY. 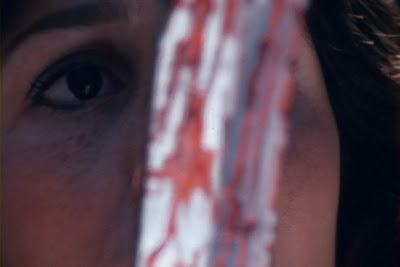 After a lengthy opening sequence that doesn't really generate much in the way of suspense but does set the tone for the look and sound of this little film, a couple is killed in THE FOREST (note that the groovy opening tune sets the stage with "Because many have died...in the dark side...of THE FOREST!" ) we cut to the big city where some dudes complain about their wives and decide to take some man mating time out in THE FOREST.  But the ladies want to get in on the act too.  So, it is a group trip, but each sex pairs off to drive up.  And the guys get delayed...  There is a slasher in them thar hills ladies! 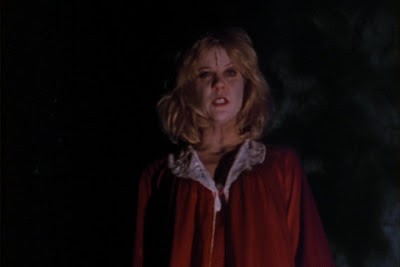 After the usual slasher antics get underway, some stalking is done, some POV shooting is utilized and you know it is about to go down when suddenly...WHAM!  Kid ghosts warn that Daddy is Hunting!  And then a ghostly woman shows up...to PUNISH the kids.  Of course, the girls are freaked out and surprisingly, one is made short work of by the hillside horrorist and EATEN!  And yes, he feeds her to the guys when they finally get there.

His story is one of woe, the ghosts are explained, but it is awesome because it REALLY happens! This isn't a crazy slasher seeing things, this is a real case of ghosts haunting a man, and his victims as well.  VERY clever scripting that gets let down a little by the skill of getting it on film, but not so much that the fun is completely lost in translation.  And hey, we have a flashback that features a husband scorned and a fight scene between a dude with a pitchfork and another guy with HALF. A. FUCKING. BUSTED. BICYCLE. 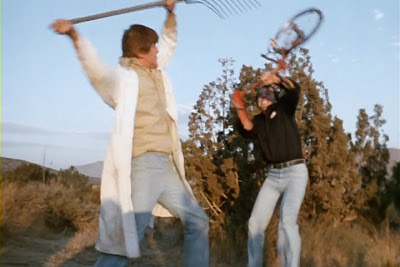 Look at that.
One of a kind.
The Forest rules just for this.

Anyway, there is plenty of backwoods terrorizing to fill up the running time and spooky ghost pop ups like a virus from another film entirely to keep you guessing.   Perhaps the most startling thing that struck me throughout was that I actually LIKED the actors in the roles. They are stiff for the most part, but the scenario is so strange it actually plays to the line readings!  The appropriate levels of panic are on display and I think the film benefits from some strongly weakened acting (does this make sense, maybe not), but I know I'd be in shock if I had to deal with all this at one time.  Of course, I'm also in shock and have acted badly in this blog entry just because I missed this film for so many years!
I really love boopitybeepedy soundtracks and this sucker is LOADED with one!  It's groovy goofy overdrive right off the bat.

A fun night of woodsy nonsense that features a giant tree. Look at this damn thing. It's huge!  HUGE like the enjoyment I got with this film.  HUGE! 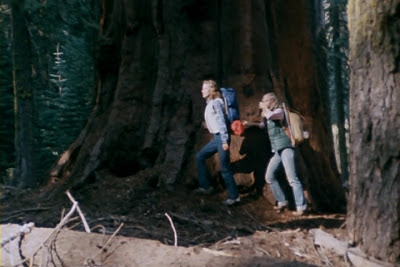 I picked this up on vhs about 15 years ago and my friend had assured me it was "classic" before I got to watching it. I don't know what film he was watching but my tape had absolutely zero blood or gore in it and they seriously must have been trying to light the night time scenes with a candle because I could literally see nothing but a black screen for a good portion of this film. Michael Weldon's review in the Psychotronic video guide confirmed he was definately watching the same tape I had. Maybe I'll give it another shot as it's out on DVD now.