Retiring THE HONEY BADGER...the greatest shirt of a young boys life (so far) 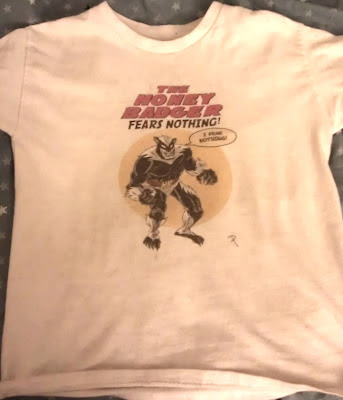 It had to happen eventually.  Tonight we have retired my son's favorite T-Shirt.  The neck is too tight for him and he has outgrown it pretty much, but he wanted to be sure we saved it for his son.
I'll certainly try.
The Honey Badger character is one you may not know, but he was created by artist Jay Piscopo (see some of his work HERE at the home of The Undersea Adventures of Capt'n Eli) and was put up for sale on THE NEMOVERSE at Zazzle.  As soon as I saw it I not only loved the design and catch phrase, but I saw it as a parenting tool that would fit in an area I was desperately seeking help with.
My son was going in first grade, a time when a shy little boy was grappling with new challenges (GYM!!) and trying to break out of his shell.  He had the social skills down, but confidence to try things that might seem overwhelming was something we were working hard on.
And there was The Honey Badger.  "I fear nothing."
So, I sized him up and ordered it. Mind you we had other Nemoverse shirts, Simon is the only kid on the block with ADAM LINK and THE HEAP as his school emblem, but over the years I've certainly talked up the Nemoverse products...
But none of them are as special as Honey Badger.  My son was actually afraid of THE SHIRT for a little bit, but I know have photos of it at wall climbing birthday parties, gym field days, sporting events, runs to the comic shop and many many other things.  The shirt, and our discussions about how the best way to overcome frightening situations was to go right at them and try your best was ALWAYS helped by this characters presence.
Three words...  I fear nothing.
Tonight the shirt goes into storage, I better wash it one last time, but I think I'll always remember it like it is in the picture. Ruffled, dirtied and well played in.

Definitely shop the Nemoverse, because you will look 100 percent cooler and more awesome in anything you buy there.  Jay is, in my opinion, a special artist and certainly a unique personality that has a lot to offer to readers of all ages.  My daughter can't put down COMMANDER X, my son loves pulling out his Rogue Agent Zero action figure, and ALL of my family wear Nemoverse gear.  I love my WILDMAN T. I love rocking out a Hercules 3000 or Justice Guild shirt at school pickup, it certainly has many kids staring at them and wondering not just what it is, but what kind of world it depicts.
Only in the Nemoverse kids, get your spinner rack imagination in gear and join in the fun!
COMICS! TOYS! ACTION!!  Click here for it all!

My eternal thanks to Jay, sometimes it is the little inspirations of an artist that echo the loudest in a young persons life.  We'll never forget the shirt, and now I've got a comics fan on my hands--hopefully one day you'll be wearing one of his shirts.  So far he has come up for a few stories with SUPERFLEX and the UNTHINKABLES, but give him time.  He wants to create as many characters as "P" has!

Now to get a replacement, I think he wants a new HEAP design...better get on that!   Come to think of it, my daughter has to retire her XS sized pink HEAP shirt!