Another trip to the Sequential Sarcophagus today with Zenescope Entertainment ushering us in to THE THEATER with this new series that promises cinematic thrills and chills.
We get some and that is certainly a good thing. 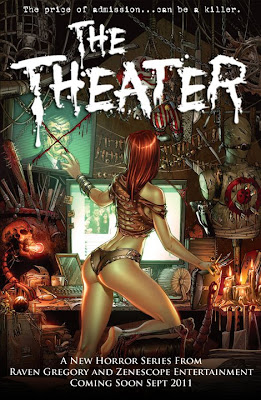 After a quick intro has a couple head into a theater to watch THE CHANGE we get a set up for a future zombie invasion that sets the stage well.  A father and son try to make their way in this dead new world until fate intervenes and the parent is bitten.  He changes and...well, you have to take a look to find out.

The story is really solid and well written. Raven Gregory has a solid style of storytelling and sharp narration for the characters that makes it really compelling.  Any zombie fan will enjoy it, and they will certainly like the artwork by Martin Montiel with colors by Micheal Garcia is really cool.  It feels like a less stylized early issue (by Vince Locke) of Deadworld enhanced by colors that maintain the linework and skips over the candy puke coloring so prominent today.
I liked this book a lot. 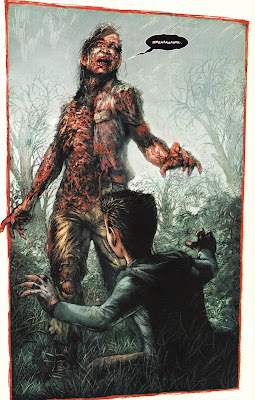 I do have one issue however, as a fan of horror cinema, seeing THE THEATER as the draw in I expected something cinematic.  The Change is a solid zombie story, but it has a LOT of monologue and is exactly the opposite of what I guessed would be inside.  I guess I would not have looked at COOL ZOMBIE STORIES WITH STRONG WRITING AND COOL ART #7883437, so Zenescope's title pays off. But...I hope this isn't how the rest of the series goes or I'll be disappointed.

Good story, strong art, self contained.  A nice way to spend some time reading comics for Halloween!
Posted by David A. Zuzelo at Monday, October 10, 2011