I was thrilled to find the complete MARRIED...WITH CHILDREN boxset in my mailbox this week, but couldn't figure out when to watch them.  And then it hit me. Halloween episodes!!  It appears there is only one that is dedicated to the holiday, so that is part of this month's viewing.  Episode 164 (Season 8 episode 7) is TAKE MY WIFE, PLEASE and is a solid effort with The Bundy Family.
Bud, Kelly and Peggy are all ready for Halloween with their amazing custom costumes that lead into Kelly saying she ran out of ideas for hers.  Check it out. 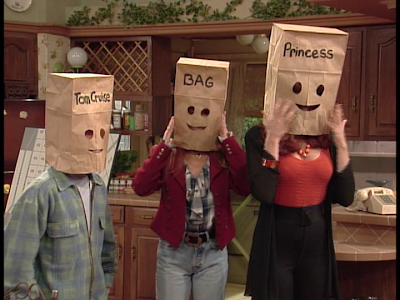 Of course Marcy and Jefferson are in trouble this holiday as well. Marcy is hosting a party for "Women Who Killed Their Husbands Just To Watch Them Die" and can't live up to what she has promised them for a 100 dollar fee. The Village People.  Yes, the real ones make an appearance and get beat down by the women, but our little troupe ends up performing as the dick swinging disco ducks as well. They only have one song. YMCA. Of course. 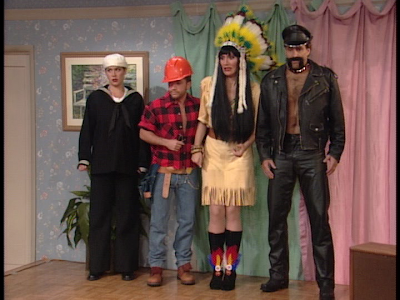 Al arrives home and prays yet again for death to come and take him from his humdrum life...and The Grim Reaper arrives.  It could take the form of his greatest fantasy or worst nightmare.  And.... 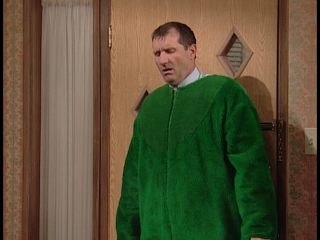 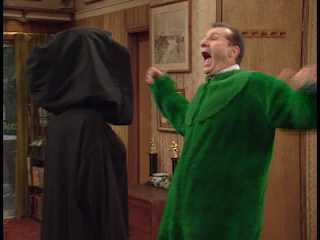 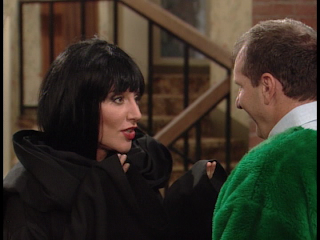 Of course.
The Reaper offers Al one simple chance to get out of hell (which he is actually in the process of going to since Kelly left a toxic canister open in the house while Al sleeps on the couch). Without his prompting one of the family has to need him.
Crap! 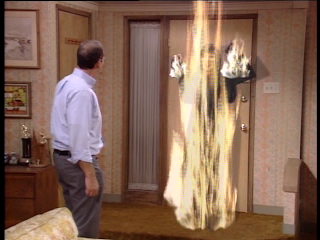 Luck strikes and the near fatal beatings dealt out to the Village People saves him.  If you like Married...With Children than you will definitely enjoy this episode. The reaper stuff isn't as funny as you would hope (frankly, I wanted to see Al suddenly turned on by Dark Peg and throw her a tricky treat)-but the bits with the angry women are hilarious and Ted McGinley is fantastic as usual. He gets some really funny bits while dressed as the Village Person with the jumbo mustache.
And hey...this episode was nominated for an Emmy for Best Costuming.  I'll take Deathly Peg anyday!
Posted by David A. Zuzelo at Thursday, October 06, 2011