Zombie Comics.  Well, there are lots-but I'm partial to checking out some of the smaller press books and like Antarctic Press in general, so it was fun to pull out the three PLANET OF THE LIVING DEAD releases. Very interesting-it takes Zombies and Space Settings (holy Dead Space) and stirred it up with an Manga Shotgun stylings to tell a different kind of zombie story.
What is most interesting to me is that the series is told in one shot style, skipping the drop off of sales for an unproven #2 or #3 that tends to occur in the wild world of comic shop ordering. I'm glad they did it, even though each installment really doesn't work as stand alone episodes, at least the book is coming out fairly regularly.  Check 'em out. 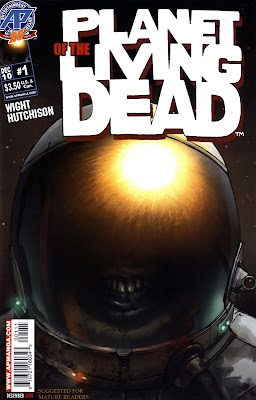 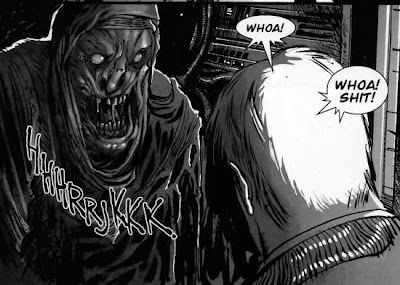 Planet of the Living Dead gets things rolling well, though it certainly takes a bit of time introducing the cast of characters in typical Alien fashion.  A spaceship. A planet beckons. A lander lands.  Zombies GRARGH! Finale.  Not exactly deep thinking, but I got what I wanted for sure.  The change up that I really liked was taking the "corporate weasel" character of Mr. Jek and making him not only an aggressive asshole, but a legit badass as well.  You'll go through the entire rev up waiting for him to scream and get eaten, but instead he goes ballistic, kicks ass and abandons all the good characters to die, surrounded by zombies and ready to get munched with an oath of vengeance on their lips.
The dialog is really solid and the artwork is a nice gritty selection of black and white digital art.  I was really impressed by the detail in both the ships and the zombies here, it made the entire thing fun to look at, even when it was overlong in the setup.
I'm not a big fan of the manga sound effects thing, but it does add a little element of cool to the sounds of the zombies here. They ooze across the page and in the readers ear as well.  I wanted more and WHAM! I got it. 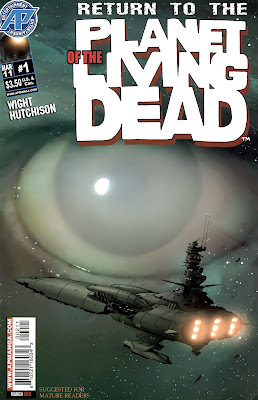 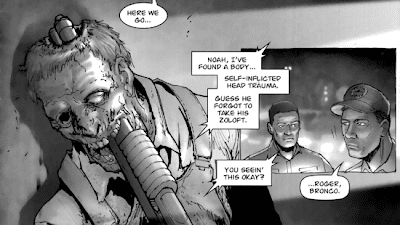 Another spaceship arrives...this time loaded up with a robot packin' investigation team to check out the planet. No human life is detected, but after another lengthy set up and more nice Hutchinson artwork, the big power suit touches down and has a mega battle with the zombie population.  As with the first volume there is a nice twist that has the outbreak spread with a slightly less than BOO-YAH finish for our MechPilot!
Again, the dialog is spot on and the art is really nice-Hutchinson has a feel for both the small interiors of the ship and then spreading out the zombie hordes.  This volume is a little cleaner looking in the art, though I'm not sure I preferred that.  Another fun read and another END? ending... I kept my hopes high for BATTLE FOR THE PLANET OF THE LIVING DEAD! 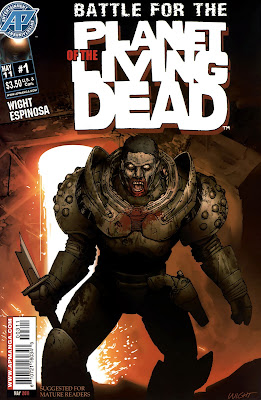 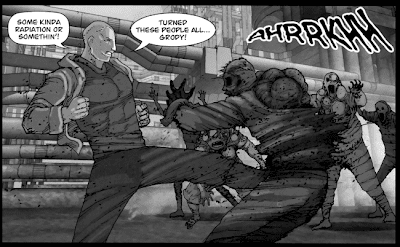 Another issue that doesn't disappoint! This time we follow a slightly average joe on his way to work and WHAM...ZOMBIE ATTACK.  This issue follows the formula with a good introduction to the characters, but focuses on more large scale horror.  A story well told, I have to admit to missing Hutchinson here, but the style is very similar and appears to use the same digital tools.  This installment has a lot more weaponry and ballistic bashing, which is always welcome.  I have to say though, it sure looks like Rod Espinosa is looking forward to the ID game RAGE as much as I am.
A cool little series, I definitely look forward to it being collected in a trade for one full throttle zombie experience!
Posted by David A. Zuzelo at Monday, October 03, 2011