The PLANET OF THE LIVING DEAD series I've been covering for Halloween Horrors continues right now!  Escape From The Planet of the Living Dead is a really interesting entry, looping back to the initial book to continue the story in slam and bang fashion.  We get a little romance, a bunch of zombies and an escape...as promised. 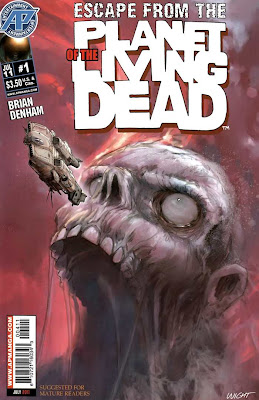 In some ways this is one of the most entertaining entries into the series, because it features an actual bit of closure (or does it??) and moves along some of the characters that were previously introduced.  I enjoyed the fact that we see the 2 year journey of our original group that was abandoned by the sinister Jek, but bummed out we actually DON'T get more of the bad guy.  It's a must for any reader of the series...but...well, it looks pretty different.
The previous issues artwork was really interesting and loaded with detail.  For this big finale the art is completely different in style, which is doubly hurtful to the continuity since it is a continuation instead of another tale set apart as the past issues were.  From the detailed and glossy (if not a bit ID like in the last issue) moderately manga style of earlier installments, we go rough and sketchy here with Brian Denham. 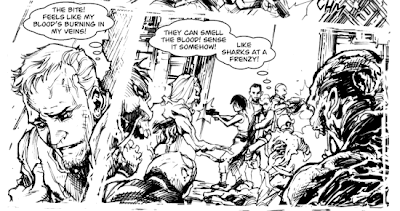 It really stiffs up the feel of the series and will be really jarring if the entire thing is collected.  Too bad...  but there is a caveat.  I actually prefer this art to the previous installments overall.  There is a ton of energy, even in the static talking sequences...Denham has a nice layout style and cuts loose when the time is right. It may not match the series, but I think I might have enjoyed the entire thing even more with this artwork style.  Go figure.
While not a good starting point for readers, if the series is collected I would recommend it!