I've known Fred Anderson for some time, and if ever there was a true film fan (and filmmaker) he would be it.  Now he has his own label and not one, but TWO releases coming from his new venture, Attackafant Entertainment!
And they are IFD films.  And they are KILLER ELEPHANTS and...sit down...THUNDER OF GIGANTIC SERPENT!!

Support this guy...he deserves it and can you ever have enough Official IFD in your collection? I think not.  Press release right here...and go check out Fred's blog! 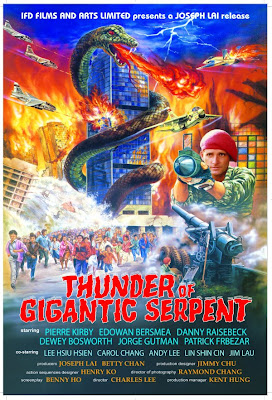 I’m kinda late here in the biz, just when everything is dying and we’re leaving DVD to VOD and similar stuff. But you know, I had to do it. I had to at least once try it, mostly because I want to see some of my favorite obscure movies on non-bootleg DVDs.

So let me introduce to you, ATTACKAFANT ENTERTAINMENT. And it’s possible to write with small letters too ;)

What I miss on the DVD-market is weird Asian movies, odd exploitation from Thailand, the Philippines, Taiwan, Hong Kong and so on. We’re not talking the normal martial arts flicks, we’re talking trashier stuff, wilder stuff. Mondo Macabro, one of the best companies in the biz, has released some amazing Asian stuff – but I don’t even want to compare myself with them. I’m in a much more primitive league.

I bought the rights to two movies, and those two might be the only titles I release… we’ll see what happen. Here they are…

The Killer Elephants (Thailand, 1976)
One of my favorites, this ultra-cheap and ultra-entertaining action movie with superstar-hunk Sombat Metanee will blow your mind when it comes to trashy action. The concept with the movie is that one of the gangs has trained killer-elephants who stomps, crushes and causes havoc to the poor suckers that meet them! You can read my review here. The knocked-out-by-elephant-dick-scene is a classic ;)

Thunder of Gigantic Serpent (Taiwan/Hong Kong,1988)
Yes, Joseph Lao’s cut & paste classic finally out on DVD! For this movie Joseph Lai and Godfrey Ho used footage from a Taiwanese monstermovie, King of Snake, and edited it together with new footage with legendary Pierre Kirby. No Ninjas, but a lot of monster action (Moslar!!!), a terrible cute kid and not always fitting-footage with western actors running around. What’s there not to love?

These versions where prepared for the international video market in the Eighties, so they are in fullscreen and with English dubbing. I’m using digibeta masters directly from Joseph Lai. For The Killer Elephants I MIGHT also include a widescreen version, sourced from a German VHS tape. Because of the cost I will make these on DVD-R, professionally manufactured in a factory. You won’t see any difference from a normal DVD. I will try to include some extras, but more on that later.

I bought the rights for Scandinavia, so the plan is to have at least Swedish subtitles. I’m sure there won’t be any problems for you outside Scandinavia to buy them from some store that ships internationally. I'm just a small business, nothing big and fancy, doing this to be able to see my favorite movies out on disc.

Yeah, that’s it. Check back for more info about release dates, new homepage, coverart, specs and of course screenshots.

Please spread the word about Attackafant Entertaiment and I would be very happy :)