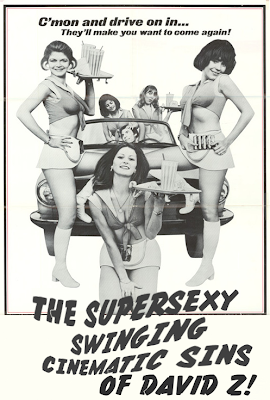 The last day of 2010 brings the "Movies Watched" list to completion!  Some busy months, some amazing views and very few total duds. I definitely came off of the Peplum high that ended 2009, watching only a few and mixing things up going back towards more "trashy" viewing.  The more obscure was of interest also, watching films like WEB OF SILENCE-AIDS (I really should review that) and GIANT OF THE EVIL ISLAND.
Also enjoyed another run through of the TV print of YOR quite a bit and 2010 is the year I finally saw TIGER GANG, a Kommissar X outing that may not be the best, but made me feel really sad that it was the final one.
The Albert Pyun run was great as well! One day I'll get to running a blogathon called ULTIMATE KUMITE KRASH!!  I fell back in love with cyborg kickboxing tournament movies this year.  How can you not love such a simple concept?
I also finally found not only the uncensored version of Being Captured (fansubbed no less...Baron Corvo will give you the best of the sex mad midgets!) but also the missing Baron Corvo CLASSICK Pat, A Particular Woman.  An unholy grail was finally found and it was...unique. Distressing. Masterful.

But the ultimate winner of "best in shows" of 2010 was, hands down, a film I'd seen many times before.  Grails found. Runs of shows watched.  Spys, heroes, villains, killers, cowboys, kickboxers, cyborg kickboxers, monster sharks and breasty evil queens were all fantastic. BUT...there was PIECES.  Three times.
I don't know about you, but I watched 259 films and a host of TV series (Fist of the Blue Sky was a real pleasure-a weird spin off from Fist of the North Star)...but I also watched almost all of them alone.  Would I really want to sit with friends and feel my "temperature" rise while wearing 3D glasses and watching Christina Lindberg spread some LOVE IN 3-D?  The headache was worth it.
But PIECES, now that is a party. Once you have seen it you are truly fucked for all other films.  Entertaining. Gory. Silly. Bone Headed. "Bad Chop Suey so long." "Baaaastaaaaaaaard!! BAAAASTARRRRD!!"
Perfect.


I watched it with my wife, who has probably got cult cinema radiation syndrome from having these around her so much. She laughed and smiled instead of leaving the room.  This was great!  Feeling her laughter and cringing, right before my birthday...it could have been the greatest present of all. We watched it with friends who had never really seen the kind of films I treasure so much.  Well, they had, but not PIECES. The king of 'em all.  Their enjoyment was a blast to share. Honestly it was quite amazing. It was like living, for the brief running time of the film, the same thrill I get posting on this little blog, almost 700 posts in, Tomb It May Concern.   It was like a Casual (un)Dress Friday for my film loving soul... And hey, when you watch a flick with a pornolinguist and follow it up with Vampyres-you know you had a pretty good year of film mayhem.  MMmmmmhmmm.

I do this blog because I love sharing my passions. These are them. You have any questions about any of these cine-sinning at all, just ask!  One you want a review of?  Ask.  I'll probably try to do one anyway.
Have a great end of this year, a better start to the next and by ALL MEANS....enjoy what you enjoy to the fullest.  ALL HAIL THE MAGNIFICENCE OF ALFONSO BRESCIA SPACE FILMS!!
-From the Tomb and your computer screen,
David Z


SUPER DUPER, ULTRA STUPOR LIST OF TRASHTACULAR FUN FOR 2010!
*Ratings note-These are not empircal. They are the fun factor of THAT particular viewing*

Demons 6 : De Profundis 8
Caltiki 8
It's Alive 3-Island of the Alive 7
Piranha 2-The Spawning 7
Cross Of Seven Jewels 9
Sorority House Massacre 2 -8
Witch Story 7
Baron Blood 9
Land of the Minotaur / Devil's Men 8
Terror Circus / Barn of the Naked Dead 7
Horror Show 9
The Ghoul 6
To The Devil, A Daughter 9
Horrible Dr. Hitchcock 9
The Ghost 8
Vampire and the Ballerina 8
The Thirsty Dead 6
Curse of the Crimson Altar 7
Fascination 8
Beast 4
Tales From The Crypt 7
The Crazies 8
Night of the Bloody Apes 10
Zombie / I Eat Your Skin 6

You're a madman DZ! Honestly, not intending to sound like a stalker or anything but you were one of my biggest influences in me embracing my passion for cult cinema. For years I was uncomfortable with people knowing how much I loved it, it was bad enough they knew I loved horror.

After working with you, talking with you and reading your pages for a few years now, it's been an honor to know you and you've been an indispensable wealth of information and recommendations.

I'm not sure how I stumbled upon your blog....but I like it!

I lost my wife to cancer this year and the part of this post that hit the bullseye of my heart is reading the part about sharing it with your wife and her laughing and enjoying it being the best present you could receive.

After 37 years of marriage and then losing her....I can tell you these are the treasures. We all have rough times (financial, hardships and scares with our kids, good and bad times in our relationships as husband and wife) but these are the times that we should always use as a touchstone when those other times crop up.

I see by your profile you list "dad" as your job. Your wife and your kids together are your greatest treasure. Always remember that and you will all have along happy loving life together. No matter what curveballs and hurdles the Lord puts in front of you.

All the best to you in 2011...and please keep this blog going. I am really enjoying it.

Thanks to both of you...Brian, I always look forward to your utterly unique view and expressions of them!

And to the poster whose name I don't know...thank you. Your words mean a lot to me, and have come at a time when I truly needed them. The most amazing part of simply putting material out there is that sometimes you get back far more than you feel you could ever put out.

Now...lets find something strange and dig in!!

Great blog! The thing you wrote on Pieces, I can only agree one of my favorite movies ever.
The reason I got here was because of googling on Japanese LD covers and found the link where you posted the covers of Beyond etc. Saw you where looking for the cover of the Japanese LD of Gates of Hell. Still interested in it? I got it...