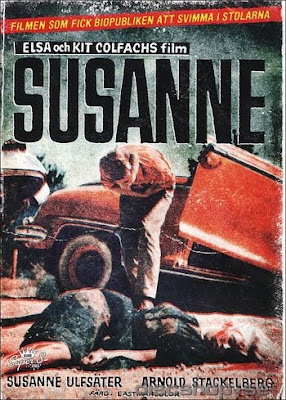 Klubb Super 8, the home of Swedish Sin Sinema, has a slew of releases hitting the streets and I just couldn't resist traveling back to 1959 Sweden for what looked like a sexploitation outing.  But SUSANNE is hardly that at all.  This is one of the best DO NOT DRINK, DO NOT DRIVE WILDLY AND DO NOT HAVE SEX films I've seen-especially given it's age.  Best of all, it is both entertaining and shocking, with real surgery and child birth mixed with some nasty car accident gore keeping Susanne's story rolling along as she finds that sometimes you get more than you expected when you go to a party that features...gasp...DANCING!!

Susanne is an average teenager, she is blonde, pretty and saunters about in her bra and narrates her tale of budding sexuality.  When she finds herself at what she assumed was a "regular" party, she gets more than she would have expected as a group of sometimes groovy and othertimes goofy teens drink, kiss and then decide to take a drive.  Things go bad from there...because Susanne gets pummeled by fate in a surprisingly graphic accident!  Will she be the same ever again?  Should she have gone to that party?  What will happen???

From here, it all goes wrong. Susanne goes through a grueling surgery, using real footage of course (I can do rubber gore all day and night, but I can't say I much care for surgical sequences).  She recovers, but not before becoming a real bad example of youth and having WEIRD rolling screen blue/green visions of the people around. Smoking, drinking and moving from kissing to horizontal bopping-Susanne smokes her way through an unplanned pregnancy!
Best of all, she takes a LONG, yet really tense, motorcycle ride OVER TRAINTRACKS with her boyfriend. Uh, don't know if that is going to help that belly bump kids... After the earlier accident I kept waiting for a car or train to plow in to the couple.The lip of my chair was causing distress to my ass I was so caught up in the drama!
Well, things go from bad to worse as we are treated to Susanne giving birth rather carelessly, with real bonus birth inserts and a shockingly young child put next to the actress.  After she almost loses the baby by leaving the stroller on an incline (!!!) and it just misses ANOTHER car accident.  Don't drink (your baby bottle) and drive!! SWEDISH KIDS BEWARE!!!!  This puts it all in perspective and Susanne decides to become a nice woman, even getting her missing boyfriend to come home to her and the baby.  Well, it's never to late to give up the Six Swedes At A Pump lifestyle I guess. 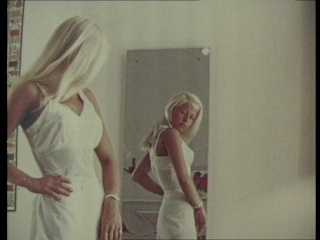 I joke, but Susanne is actually very compelling, which is why I broke so much of it down here.  Made by a doctor, it plays so honestly and earnestly it becomes painfully hysterical in it's concern for the youth of "tomorrow" by a man of "today."  If he had only been making films in the early 70s I can imagine what this would have been like.  But, just because it is compelling, it isn't exactly well made, but that really adds to the appeal, and charm, of Susanne.  A lot of the scare films in the US have a sleazy undercurrent to them, sexploitation marketed as "warning" almost, but not this film could have just been called DON'T and it would have worked just as well. 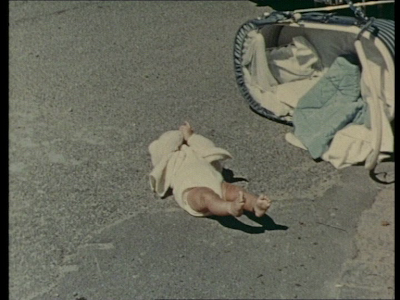 Interestingly, the first quarter of the film is well done, the idealized "girl in danger" scenes are great, as she first explores and then succumbs to the wild and groovy world she thinks exists, it fades from the pastoral to the urban "hell" of cities and cigarettes Susanna finds herself in. All from one bad choice.  One that she could have prevented....thanks doc. The family values finale is heavy handed, but really is the only way the film makers could see our lead girl actually thriving and surviving.  They really mean it!
Also of great help is an excellent performance from Susanne Ulfsater in the lead role.  All the other actors come and go without really making a lot of impact, but she holds down every scene and manages to giver her character a lot of definition and realism.  From wide-eyed to bleary eyed to OHMYGAWDIJUSTLEFTTHEBABYINTHESTREET crazed, she makes me believe it.  Not to mention I just felt bad for her during the entire railroad track ride. Looked painful to me, and it happened a long time ago in a place far far away. 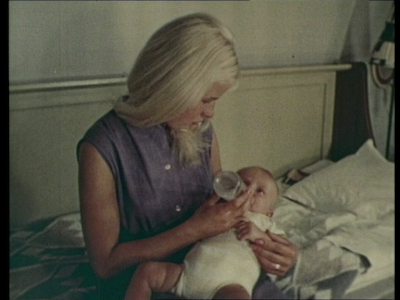 So kids...DON'T!  Well, if you have to do one thing, and you want to enjoy some vintage Swedish Scares, get this DVD!  You'll regret it less than a night with a beautiful Swedish woman seeking her sexual independence in your arms....wait....what?  You'll LOVE it I mean.

The DVD from Klubb Super 8 looks really good, especially considering the age of the film, I was really surprised how well it had been preserved!  I'm glad it was, because you couldn't ask for a more fun little time capsule of family values at the start of the 60s.  Also included are some drivers scare films that have even more surgery scenes (jeez...no motorcycle for me next time I hit up the Swedish back roads!!) and a commentary track by the real Susanne and her daughter.  I can't comment on it, but according to the Swedish Sin Shinobi NINJA DIXON, it is an excellent track.

Contact KLUBB SUPER 8 for purchasing details and by all means...just this once...go ahead and DO IT 'TIL YOUR SATISFIED!
Just don't drive. Or drink. Or have sex. Or leave a small child in a stroller on an incline. Because that is bad. BAD!! 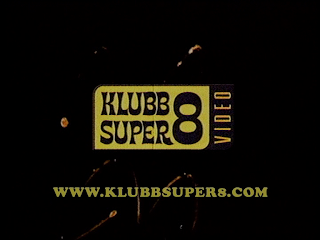 Great review David!
I would say the commentary track is one of the best I've heard, really. Extremely informative and funny, and it's weird to hear the daughter sitting and asking her mum about how it was to be almost nude or kiss someone on front of a camera - and then the mother tells her that they were "practicing love scenes" on the way to the shooting ;)

Awesome David!
Hope to see you in Chicago next August, when me and Christina Lindberg are coming back to USA for a convention!