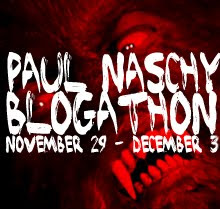 Thanks to the folks at MMMMMovies, the internet is about to get a whole lot more Naschyphonic!  The Paul Naschy Blog-A-Thon begins today.  I couldn't resist starting with the tale of THE LICENSE PLATE.  I've known a lot of fans of El Hombre Lobo, but nobody has been more responsible for giving me a road map to enjoy the films of the great Spanish Monster Fan Turned Horror Man than Bob Sargent.
Bob's magazine, Videooze, was one of my favorite zines, and featured lots of Spanish horror articles and reviews that sent me scurrying to all corners of the video mail order world for a fix.  And man, he sure loved Naschy in those pages--more on that later though.

When I first met Bob he mentioned that his license plate was NASCHY (can it get cooler than that?), so he was easy to spot on the road and possibly confused more than a few members of law enforcement over the years.  And he had two plates.  And a contact for Naschy...
So, using enough Windex to shine away the road wear, he polished it up to be "fit for a king" and sent it along...
After he passed away, I was clicking away and found THIS ARTICLE, and was amazed to see the picture.

Paul Naschy had fans, but he also could inspire viewers not just with his films, but the obvious love he put into many of them.  When I watch some directors or actors films I enjoy them as films they created, when I watch a Naschy film I feel like it is a look directly in to the head of someone I'd be proud to call a friend, someone who gets it the same way I do.

Can you imagine getting a license plate, from a foreign country, with your name on it?  I hope he felt the full force of Bob's admiration for the films and the man behind them. I'm sure he did!
Posted by David A. Zuzelo at Monday, November 29, 2010

That is pretty awesome. :-)