Halloween Horrors 2 - It's Alive 3-Island Of The Alive

I always slap myself at the "here comes the finish" during a Larry Cohen film. The guy is just GOOD. A good writer with an excellent sense of pace and exploitation action that mixes with comedy, drama and rubber suit mayhem, he takes his popular IT'S ALIVE series in a lot of directions with the second sequel, Island Of The Alive.  Funny directions. Dramatic directions.  And oh yes, gory directions. 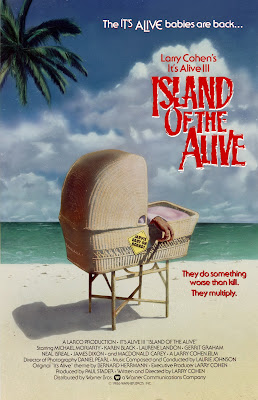 Michael Moriarity stars as the mildly insane and really appealing as a sorta kinda heroic asshole ex-actor and "father of the monster" Stephen Jarvis.  After he pleads for his son's life in a courtroom drama that includes a rubber monster growling at Macdonald Carey (!!) the remaining monster babies, who we see are hunted and shot on sight now, are sent to an island to live out their lives. Only a few little problems. They procreate??  They grow really fast! And, if you go looking for them you find a gruesome fate awaits. The little buggers are vicious and will chomp your face clean off before you even see them!
The film doesn't really follow them all that much, instead we follow Stephen Jarvis down a horrible spiral as he can't get laid thanks to his noteriety as a freak birther-so he gets hoodwinked in to writing a book about his experiences, which just alienates him from his ex-wife, played by Karen Black.  Her life isn't any easier.  Hiding out and then being blackmailed for sex by a scuzzy co-worker, she has to eventually find her way to help her twisted progeny.
And this is just the start. Summarizing Island Of The Alive would be exhausting. Jarvis ends up on an expidition to the island, where he fucks with EVERYONE, then ends up on a boat with cannibal creatures, then goes to CUBA and gets messed with and THEN finds his way back to the US in a wonderfully silly turn of events and THEN...the final showdown.  Will IT remain alive? Will love conquer.  Will you see a monster baby breast feed a smaller monster baby?  Oh yes...you have to watch. 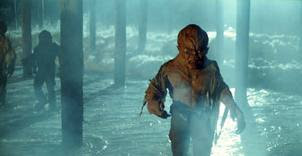 This film is pure exploitation film fun that doesn't skimp on Cohen getting his licks in on corrupt systems while making perfectly entertaining monsters and mayhem along the way.  Somehow a dinner scene where Jarvis realizes how screwed up his life is as he hands out his "father of the monster" business card is equal to a group of hapless hunters being chomped in ShakeOVision.  I found myself rooting for Jarvis and his baby! I was hoping that he could win back his ex-wife!  I was completely absorbed by the characters and found the monsters to be a fun side story.  While it is not the best of the series, because I think the first is just fantastic, this is a great monster movie that feels like a primer on what Direct to Video sequels should be. An enhancement of the concepts that hurls out any fear of success and runs with the success the films before it have ensured.
I really enjoyed the jump to stop motion effects in some scenes as well. No Rick Baker here, but the babies and there advanced state are nifty to look at and watching them skitter around is ghoulishly interesting.  The foley work for the monster baby voices is excellent as well...chilling. Gross. To much like real babies. Gone feral. Ugh. 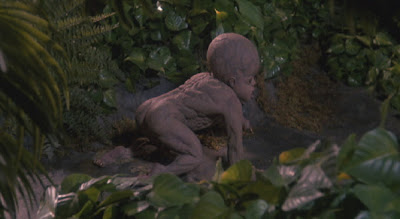 Special love for Micheal Moriarity and his sea borne singing shanty skills, which must have been ad-libbed, and his ability to make me believe in Jarvis while laughing at him all the while.
You may have seen the 3 film It's Alive budget release. Grab it, this is great October viewing.