Recently I watched one of my favorite films, Vampyres, with some friends.  After first warning them that film instills me with not only an awe for the fantastic cinema of Jose Ramon Larraz, but also chills me to the proverbial bone in fear of the time I watch it and priapism sets in and I find myself in the Emergency Room.  Blu Ray could be dangerous!  Thankfully I made it through, only realizing later that I essentially warned people I know that I'd probably be unable to stand up during the feature without embarrassing myself due to prominent erectile function.  Yes, my wife must have loved that!  She is a kind lady in the face of my rather brutish cinematic nature and our guests took it all in good stride. But dammit...I love Vampyres.  Give me Anulka any day, every day, please!  Not only that, but Larraz definitely crafted one of the grooviest, weirdest and sexiest vampire films ever made... even if I think it is a ghost film and has no "Lost Girls" at all.
And Larraz...after this nugget from the Vampyres commentary track first graced my speakers I knew I'd follow this guys career wherever it lead.  Read in an utterly wild tone, half dirty old man and half raging director that hates that his film was cut in some territories on release.
"Jesus o Christ...I see the POOSY of Anulka!"
Mr. Larraz, sir, I have your back. You make it (or made it) and I'll watch it.  But, I realized that I had never followed through on this promise completely. Sure, I saw the big ones, the hard to find ones...but there is much Larraz to see and I've been lazy about it.  No more!!

So, this week I watched three Larraz films and did they ever range in subject, quality and fun level! 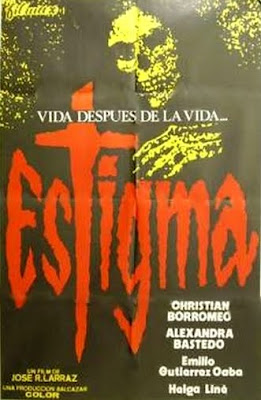 First up, ESTIGMA.  This is a very very odd film.  I don't usually describe a horror film as "mellow" and the follow it up with "essential" or "awesome."  Awesome would be too strong, but Estigma is a very neat little horror film that dovetails neatly with Vampyres actually.    The stigma noted in the title belongs to Sebastian (Christian Borromeo) who has the ability to kill by force of his will, even when he doesn't really want to.  When this happens he gets a bloody lower lip. Hmm...not where I would think to put a stigmata, but it is kind of strange.  Toss in a whole bunch of interesting characters trying to figure out what is going on while exacerbating the situation with our oddball young telepathic killer and it is a good watch.  But THEN add in the fact that we are watching something that is developed out of a past life (ok) and then SHOW us the past life and throw in some nudity that any Larraz fan would expect, well, now we are getting groovy.  Not fast paced, Estigma does have a unique atmosphere and though it can't compare to Vampyres, the fleshed out (and fleshed up!) flashback scene feels like a very extended take on the opening of his most famous work.
Quite a few striking shots, a really relentless axe attack, religious pondering and a groovy score--not to mention the presence of Patty Shepard and Helga Line--all make Estigma worth flowing through your player.  Definitely not Larraz 101, but a nice addition to your curriculum. 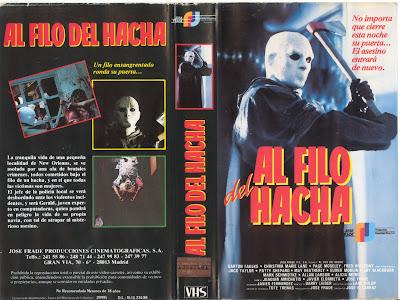 The axe attack mentioned above made me realize that I'd never seen the Larraz Slasher entry EDGE OF THE AXE.  Well, I sharpened up my senses and dived in headfirst. What I found out was that Larraz can shoot really intense violent scenes like the ones in Vampyres at the drop of a slasher mask!  While the film isn't all that gory, though we do get some cutaways followed by grisly bodies in post MPAA Friday the 13th tradition, when the eerie blank faced killer pops up things get buck wild and nasty!  Bam! BAM! BAM!! BAM!!!! WHAM!!!!!  Yeesh.  But you know, it is hard to see a lot of Larraz in the film thanks to one of the most silly of all slasher scripts.  Now, you'll know who did it fairly quickly thanks to one obvious line that spears all the dead herrings and throws 'em back ("Do you think it is easy being a monster?")--but who cares? Unlikable characters, Jack Taylor (in full moustachio form!!), BAM WHAM CARWASH SLAM!!, nudity, profanity and a killer that looks like a cross between Micheal Meyers and an unfinished mask for an Italian zombie film are a good time.  Oh, and the music is killer, take that as you will.  But there is something that I'll never forget about this film. Not who killed who or how they did it. Not a splattery set piece (alright, Carwash Slam is pretty cool).  Not even wondering if our married hero trying to score another girl would ever get her on the boat to seal the deal. Nope, it is a sterling use of computer technology that boggles the mind!  One of the leads is a computer gamer that builds a mainframe (or something) that can answer any question.  OK. He gives one of the girls a computer so they can communicate and play games. Smooth!  But when they type, the dubbers insert a MONOTONE MALE VOICE TO READ EVERYTHING.  When a beautiful young woman types "I'm scared." and it is then read "I'M SCARED" with a monotone and a little reverb by a voice that sounds like a 50 year old man...priceless. And it happens a ton.  I'm not laughing AT the movie at all, it is brilliant.
Spoiler--Since the girl is the killer this delivery masks the meaning and tone of her words, making it as blank as the mask she wears to murder her victims!  BRILLIANT!!
Slasher fans should give it a look, and if you like your slaughter flicks to be a little off kilter, you should enjoy it. 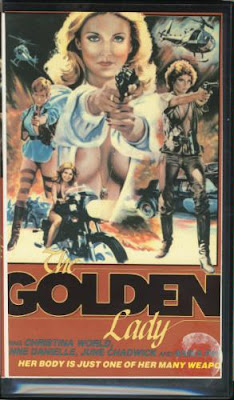 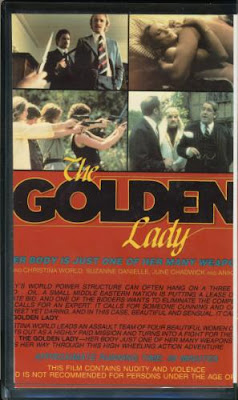 Finally, I saddled up with the strangest of all!  A Sexspionage thriller by Jose Larraz? That features a group of female agents out for corporate shenanigans?  Tits everywhere, some violence and splattery bodies?  DISCO MUSIC!!!  I love THE GOLDEN LADY.  This film was probably intended to be a Bond style affair, but the low budget replaces ski slopes with one field and a helicopter flying in a circle over and over for action setpieces.  Fah, who cares??  There are dance numbers that will mystify! There are plentiful nude sequences from the lady spies (including June Chadwick)! There is a convoluted plot you'll sort of forget as it goes along!! But I can just see Larraz happily directing this one--they even have Desmond Llewelyn in his most famous role as a cameo.  A very very very very very very obvious cameo.  This one you need to see, because that it lacks the weird ambiance of a good Larraz film, it slathers on the fun from the lascivious man who loves to see POOSY on screen!  If you want action, look elsewhere, but if you want fun-this one is for you! 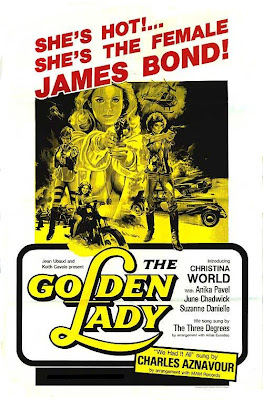 Here...have a naked Anulka shot too.  Thank you Jose!!  Off to find more Larrazatronic flicks for me!! 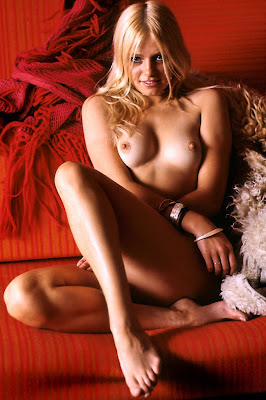 I've only seen two of Larraz's films - Vampyres and Black Candles. Both great little movies. I must try to track down more of his stuff.

The Golden Lady is definitely now on my list of things to see. thanks.

Vampyres is one of my favorite commentaries and there isn't a week that goes by that I don't think about that line that you quoted-It makes me smile every time.