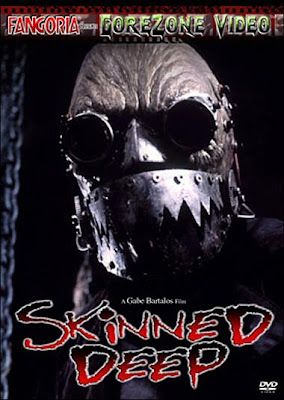 Halloween Horrors 2009 just got WEIRD. Skinned Deep is the giant latex brained beartrap of a film that rips off everything from Texas Chainsaw Massacre to The Road Warrior produced, written and directed by Gabe Bartalos. His name value, mixed with the AWESOME looking monster on the cover (who goes by the name Surgeon General) had me hooked. I expected it to be gory-it is. I expected it to be packed with make-up mayhem and bizarre set design-it is. But I could not have expected to see a nude man running down a city street WITH A GIANT BRAIN PROSTHETIC ATTACHED TO HIS HEAD while onlookers gawk at the sight.
And that is not even the weird part, that was just funny. 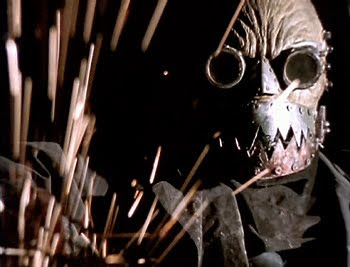 In brief, since there is virtually no plot, an "All American" family of goofballs that would appear to be The Bundys from Married With Children and are "cleverly" named The Rockwells stumble in to the trap of another family that would appear to be The Family from TCM. After a quick dinner sequence everyone is dead (with the youngest boy being bisected!) with the exception of oldest daughter Tina. She is wanted and "loved" by Brian-The motorcycle loving lad with the giant brain. She tries to escape. Surgeon General, Brain and Plates (Warwick Davis) kill some folks...and an elderly biker gang challenges the group to a duel to the death.
End. 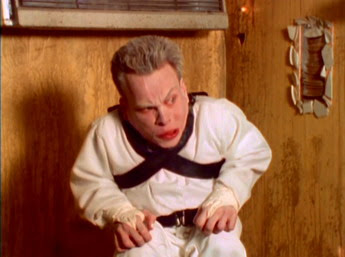 Now, this is nothing special really...but the devil is in the details and Bartalos piles on cool little bits at every turn. Plates is a midget (albino?) that hurls plates-from a cool little back holster! Next Stop folks...EL TOPO! Surgeon General rocks and even has a visor HUD that looks like it wanted to be ROBOWAR instead of Predator! Brain waggles his dong for the amusement of the audience!! Uh...yeah. Also, the sets are great given the budget, the newspaper holding room is especially nifty and features the easiest escape route I've ever seen in a film. Cameras spin from the ceiling, blood flies, a young boy is chopped in two in what I'd call a tribute to Andreas Schnaas though I bet Bartalos would punch my nose in for it...fun. 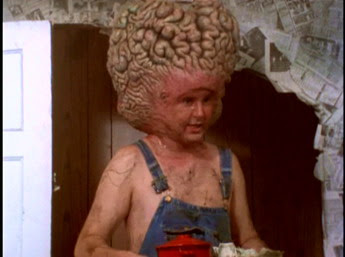 Forry Ackerman even has a cameo! Just don't get me started on the elderly bikers-when one dude whips off his shirt for battle things get really scary. Thankfully he keeps his pants on.

Special praise has to be given for the final 15 minutes of the film, once THE CREATOR is revealed I am in awe of these effects. Imagine The Crimson Executioner in a little Peplum skirt that says "DYNO-MITE" if you can. THEN IMAGINE HIM WITH NO FUCKING HEAD! I have to watch the making of stuff, because...I just can't believe it. And don't even get me started when his stomach tears open and Belial 2 pops out! Wow. 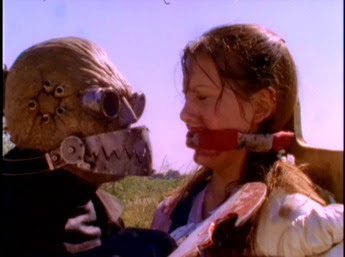 Skinned Deep is best described as a promo reel gone awry. The time spent working with Frank Henenlotter rubbed off on Bartalos-whose make-up works I love, but I kept thinking this was Texas Chainsaw Massacre as directed by Porn Auteur/Agitator Rinse Dream with the production team of Sam Sherman and Al Adamson sitting back and chuckling that someone actually loves Brain of Blood! I've seen "this film" many many times, but never have I seen it done with the warped energy that pops out of the rubber, foam and faux blood of Skinned Deep. While it does drag a bit in spots and could have easily been 30 minutes shorter, this is the kind of film that defines the phrase "a new twist on an old tale" with every frame. You want tension, terror, horror, scares or even laughs that make you feel comfy in your love of horror films? Avoid.
But if you, like me, wonder what kind of films are hopefully unearthed by SOMETHING WEIRD DIGISIGNAL in the year 2166 as odd points in the genres history? THIS IS FOR YOU! 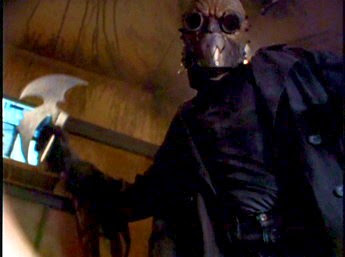 This sounds like a good one Z, thanks for the tip! Just added it to my NetFlix queue.

I resisted Skinned Deep for as long as I possibly could, but that cover just wouldn't let up until I finally bought the damn thing. I watched it with some friends and we had absolutely no idea what we were in for. It's an amazing film.

Have you seen Plaga Zombie? It was also released by Fangoria. Bonkers backyard zombie flick produced by a bunch of Argentinian teenagers, and the disc comes with a second feature as an extra. Probably the best DVD deal I've ever run across.

Plaga Zombie is great fun as well, I love this kind of production. One of the very first things I did online was find Andreas Schnaas for an interview.
Nice to see that Skinned Deep has a following, Surgeon General is cool!