I've been on a movie watching spree with some clones of Bruce Lee, devilish terrors, stripper scientists tormenting Eric Falk and much more, but nothing has beat the week of the "other" cinema of Blind Dead creator Amando de Ossorio.
Lots has been written about him over the years, with the Blind Dead always taking center stage, and perhaps rightfully so. However, there are lots of gems and some real odd films if you chose to look a little further into our man (and one time European Trash Paradise winner for Best Director) Ossorio. 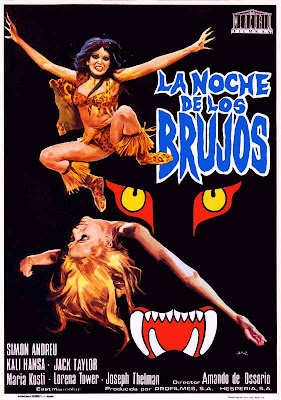 First up was a film I have a lot of love for...NIGHT OF THE SORCERERS. Yes, I know that the BCI disc was an "alternate" cut, but it looks fantastic and gave me exactly what I was looking for. If you love jungle action and gore, this is the film for you. If you love to see beautiful women randomly disrobe (or be disrobed by skillful voodoo whipmistresses!) than this is also the film for you! Basically, we tag along for a zoological study in Africa where half the explorers are hot women, and Jack Taylor brings along his mustache for good luck. Sadly for them, they find the ritual slayground of a tribe of Leopard Women that act a lot like Vampires. Only thing is, you decapitate one of these buggers and the head just screams at ya! WAH! Low on story, but high on Kali Hansa nudity and slow motion leopard skin clad witch women-you really can't beat this movie for a nights entertainment. Special notice should be given for the excellent score by Fernando Garcia Morcillo, it has a bloody jungle boogie that elevates some of the more walkie talkie moments.
Also fun, the resident jerk character is played by Simon Andreu very well. I laughed after thinking that he was "such a dick" and then his name is Rod.
Yeah, I'm two years old, but I can type. 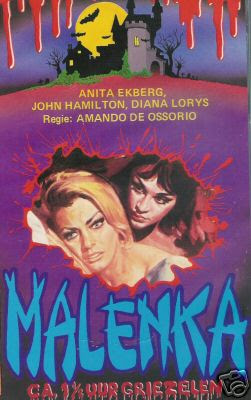 Next up is MALENKA-NEICE OF THE VAMPIRE. For some reason I have never watched this one as FANGS OF THE LIVING DEAD. So, I popped in the version released on Dutch tape back when the Dutch made VHS tapes that knocked us all out and shook money from our wallets. Now, this was Ossorio's first horror film, but it really isn't bad at all and despite having a poor reputation it is really watchable and I had fun trying to figure out what was going on. As a horror film, it really only works in one sequence, but what a sequence that is. Malenka is "revealed" via flashback as a "NecroBiologist" or just a plain old Vampire / Witch if you will. I was loving this bit, but sadly the rest doesn't even come close. Anita Ekberg is BURSTING from her clothes in a lot of scenes, so this scores huge points for me. However, the most unlikely source of amusement is from Max, the goofy sidekick. He looks like he fell directly out of an El Santo film and his panic attacks and general kookiness is the movies strongest suit! 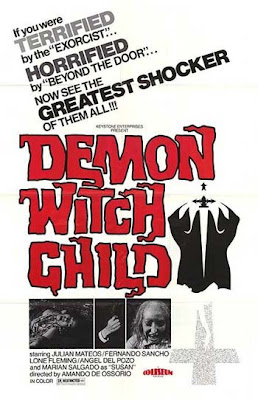 Ah...another one that I had not seen...and another with a terrible reputation. Well, maybe it isn't the best Exorcist clone I've seen, but it does have some great bits and I found the entire thing extremely interesting. This viewing showed me just how spoiled we are regarding video quality after the DVD explosion. There is a nifty special effect of a little girl rotating not merely her head, but her entire torso. The full frame cropping makes the effect difficult to even make out at first glance, but it is there. Also, instead of simply having a simple "the devil is in you" exorcism movie, we have a grotesque old witch who is killed because of her association with a series of infant sacrifices (including one that is more than a little effective) rising from her body and seeking out an innocent host.

What follows is Fernando Sancho getting told off by a little girl (after watching In The Folds of the Flesh a few days before this was a very strange change of pace, though thankfully Sancho kept his clothes on!), hovering, priest cussing out and a really nifty plot bit that involves a penis removal and delivery service...from hell!!

And one of my favorite screen ladies, Kali Hansa shows up briefly to be a witch!
Now, as is sometimes the case with me, it is the little things in a film that count, and the subplot about Father Juan and his ex girlfriend played by Maria Kosty is the best part of this movie. In a flashback inspired by the witches banter we see that before he was a man of the cloth he had a very fine woman in love with him. In the present she returns...as a whore! Maria Kosty in a giant fright wig that is more bizarre than Soledad Miranda in jumbo Euguenie sunglasses is a sight, and then she whips off her coat for a lingerie shot that will have Spanish horror fans cheering.
A fine film? Nah, but lots of fun-perhaps for the wrong reasons. 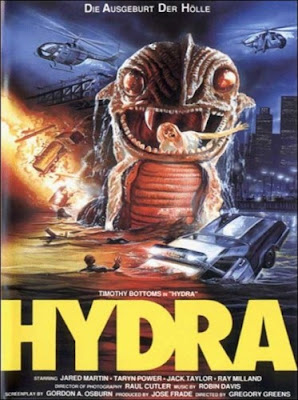 "Why are you watching THAT???" was a text message that I received as I sat down to watch THE SEA SERPENT. Oh is it bad? Yep. Is it entertaining? At times it is, and honestly I was never bored. Any movie that has a plot featuring a boat captain that loses his ship to a finger puppet/sea monster is good. Then add in a socialite seeing her friend get chomped for no reason, thrown in to an asylum for telling her story for the trouble no less. When the pair team up it requires no more than a quick doctors whitecoat tossed over some lingerie to walk through the front door for the intrepid pair. They give chase to the finger puppet to prove they were right.
And then Ray Milland shows up, trying hard to sell this story-but showing that like any true veteran of cinema, you can inject a bit of humor and style into the least of roles. Now, this might be a spoiler, but when Milland hopes the monster just goes to the Middle East at the end I laughed long and loud. Bad. Yep, but in a good way.

Given the love I have for the Blind Dead, I found it a bit sad that The Sea Serpent was the final Ossorio flick...sadly the Nuclear Powered Templars never did get to stalk the globe. But you know, when it comes to comfort foods and trashy Spanish cinema, the man is a genius.
Posted by David A. Zuzelo at Saturday, August 29, 2009

Thanks for a nice read, David! For me De Ossorio's films are pure, unapologetic pulp horror comfortfood (that said, i'd argue that THE NIGHT OF THE SEAGULLS and THE LORELY'S GRASP displays a little more sophistication and orginality than the others). The Blind Dead films are fine, i'm just not as big a fan as you and many others (SEAGULLS is the exception). I would rate De Ossorio's horror films like this (still haven't seen Malenka) on a scale of 1 to 5:
TOMBS OF THE BLIND DEAD - 3+
NIGHT OF THE SORCERERS - 2
RETURN OF THE EVIL DEAD - 3
THE LORELEY's GRASP - 4
HORROR OF THE ZOMBIES - 1+
THE NIGHT OF THE SEAGULLS - 4
DEMON WITCH CHILD - 3
HYDRA - 4 (entertainment value - it's like if Eurociné would shoot a really pathetic monster flick!)

Hi Lars! You are right on about Ossorio and his best work...The Lorely's Grasp is a favorite of mine as well. The only place we part ways is that I really do love Night Of The Sorcerers a lot, but that is the fun of comfort films.
Since posting this I watched the alternate ending for Malenka as Fangs of the Living Dead. It serves so little purpose I can't understand why it is there, but it doesn't destroy the film nor is it exactly a "slapstick" finale as I've heard it called.

Now, I want to know how big the Hydra creature head was when they were stuffing actors in there, it was GREAT!

Is HYDRA out on DVD?

There is a Hydra disc, Lucas Balbo pointed this out. It is a newstand type disc, so probably hard to track down!
I'd dig one myself.