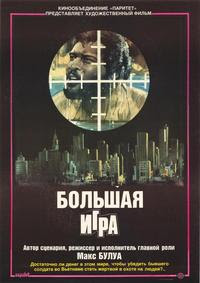 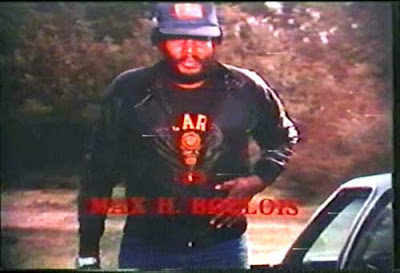 Max Boulois, the man behind Othello, The Black Commando strikes again. If Fred Williamson had Po' Boy Productions, Max certainly found the Mo' Po' Garçons-Eurocine, to pickup his project. What starts out as a simple rip off of The Most Dangerous Game gets injected with a french fried funk that is all Boulois' own.

Opening in Vietnam, Gerald (Max B) bursts on the scene to save his good buddy as they attempt to escape a P.O.W. camp. Slinging him over his shoulder like a sack of footballs and running through the open jungle, this is something Chuck Norris could only dream of doing. See, Max is a good guy... but the world isn't prepared to be nice in return of course! When Gerald gets home to the Big Apple there is a hard road ahead for our jumbo commando as his gym, which appears to be a bedroom, has run him into serious debt. Loan sharks are closing in. But wait... shock cut to a nude black man running away from some hunters in a jungle that looks suspiciously like "Vietnam"-and when he gets shot too easily, we know that these bastards need a Hard Target...a Most Dangerous Game...A BOULOIS! 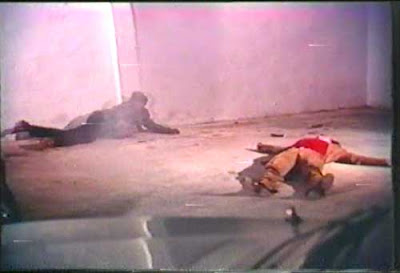 The hunters come to the same conclusion of course... and because ex military guys are involved (of course), they pull some military records in the search for someone tougher to kill. Behold! The way to get our man involved to the MAX has arrived, and Gerald is contacted. With an offering of one million dollars to survive the hunt, our skeptical bit of brawn listens and looks around his gym/bedroom. The down on his luck hero agrees, and after a bit of blindfolded transport, it's back to the aforementioned weeds to duke it out with some white hunters who really aren't so great. Of course, they do spell out the fact that Max Boulois is the perfect specimen despite what our eyes tell us. Also we learn that because he is black he can swim fast and jump crevices (no lie, that is what they say!). Well, Gerald takes it to them, using his wits and fists, finally commandeering a very funny little ATV for some slow dragging of the evil white man and a game of chicken with a helicopter!

After making it home, the poor sports that tried to kill him for fun create trouble and refuse the million to the Man...killing his friend in the process. Push comes to shove, and Max stops sitting down (which he does while wearing his football helmet and fondling a ball) and springs into action. Recruiting the finest young teens on bikes, he sniffs out the government men (and even gets some help from a nice looking Government agent lady with a gun)-and dishes out his vengeance in true MadMax style.

To call this a good movie would be an overstatement, yet I can't help but be fascinated and utterly charmed by the oddity of Max Boulois cinema. His Othello The Black Commando is a bizarre experiment where Boulois was trying to be very serious and thoughtful, but Big Game doesn't try to be anywhere near as daring. This is an action film poured straight through one mans aspirations and tiny pockets! When one Golf Pro turned activist writes, directs, stars, and even does the funk score (check out the vocals!) it is certainly an achievement. The film is loaded with images that go from sublimely strange (check out the use of opticals on the explosions and especially the flashback/imagining of his friend dying) to the stunningly dull. Cheap and ugly looking, the flick doesn't attempt to be more than it is-and uses the attitude and style of it's auteur as it's sole drawing point. For Americans it's a jolting geographic experience as well. The film is shot in Miami and New York/New Jersey, but Max drives between both! Somehow Florida becomes a city in New York! Classic blaxploitation? nah. Classic Eurocine pickup oddness? Certainement!

The Greek video tape from Video Alsen is full frame and ugly looking, but finding this obscure flick anywhere is a blessing...if you are lucky enough to stumble onto it, enter the Big Game without haste, because it could be gone tomorrow!

The enigma of Max Boulois rolls on for another movie. Not your average hero, Max is a big burly ex-football player and happily seems to NOT exude any charisma, unlike so many other ex-jocks who tried a turn in the action flick game. But the man has vision, and it's his own, so you can't fault him that. Today, you can find Max-Henri Boulois' books of political commentary in France, as well as attend his political rallies. In 2001 he hosted "Memory of Slavery", with guests such as Nelson Mandela! I wonder if Nelson caught Big Game? It's a crevice jumping classic!