Guy N. Smith and The Cadaver 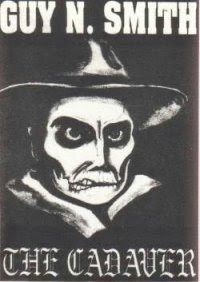 “’The blackness was streaked with red, his chest would explode at any second. Pray God that he died before the creature which inhabited this foul hell caught up with him.’”

Edward Kroll holds the town of Knighton in a death grip of fear and anxiety, and he isn’t even dead-YET!

Halloween is fast approaching and the children of the town are bored and ready to play. They chose the wrong playmate this year. Though his skeletal form appears weak, his wrath knows no boundaries, and whether it be a thrown apple, a harsh word or even a denial of service-there is only one way that Kroll will even the score. DEATH! As the villagers first deal with living in fear, they are relieved when their most terrifying resident dies alone in his book encased home. But relief becomes dread as suddenly his body goes missing from the morgue, only to return to his regular ways. As the winter snow arrives, the rest of the world becomes a distant place and the body count begins to mount as the curse of THE CADAVER continues. Can the living stop the terrible grip of Kroll? Or will the dead need to rise from the grave to the horror of all?

Guy N. Smith’s most recent published novel at first feels like a departure from the nasty and naughty horror tales he is best known for. With the void created by the missing nymphomaniacs and monstrous creatures, The Cadaver is instead a small town ghost tale, building slowly and reaching full burn only in the final chapter. But what a final chapter it is! Smith is a writer that loves to play with his characters, setting them up for a major fall, and that remains true to this day. While there is certainly humor in many of his novels, the whining and farting Edward Kroll is a great pulpy villain. Though he comes off as a deranged grandpa that has nothing but hate for his neighbor, the reader may still fall in love with him. Every phlegm-drenched shout of the word “PUDDING!” is a treat, and when he gets his comeuppance for wishing bad thoughts on the village children it is a pathetic end for a dreary old man.

Yet he returns almost unchanged, his grave empty. The locals attempt to solve the mystery, but many of them fall before the wrath of the old man that may or may not be a ghost. While Smith goes to great lengths to motivate the townsfolk, they aren’t a particularly interesting bunch. A reporter goes looking for a scoop… which doesn’t work out. A bookseller schemes to take the best of the curmudgeon’s vintage pulps at a profit. Guy N. Smith would never stand for that, given his love for bookselling, and writes the sleazy book thief a worthy death. The town doctor and local P.C. are intrigued, but never really come close to what is going on until it is too late. The only characters that stand up to Kroll, serving as a foil for his entitled ways, are the Morgans, owners of Kroll’s favorite eatery. Their sons are the wayward kids of the neighborhood and step in to the crosshairs of the cursed cadaver, yet they cannot afford to lose the little business they have. However; the family does not fall into a heroic role, instead they must suffer the old man on a daily basis, and their domestic drama provides the main plot of the book. While this is not exactly thriller material, Smith balances the story well, and puts a human face to a supernatural plotline with surprising ease. This is good writing, regardless of genre.

Bonus points should be given to frequent Smith readers as he makes a bit of fun of himself here-look for a reference to THE KNIGHTON VAMPIRES that will raise a chuckle. “That writer guy…”

Short, sharply written and compelling, the novel confuses the reader as much as the situation confounds the characters, and that is a good thing. The final act validates the “horror” aspects of the novel, but by and large this is a drama with a fine tuned use of the pulp standard weird tale. Instead of the average, and perhaps expected, horror tale, Guy N. Smith uses his skills to create a memorable story that stays true to his bibliography, and also pays tribute to the more classic moody horror novel along the way.

Interestingly enough, The Cadaver is, like Edward Kroll, living a second life in this novel. Smith originally told this tale as a short story, published as a signed edition by Black Hill Books to commemorate the 100th issue of Black Hill Collector. If the novel is good, the short story is fantastic. Using only 6 pages, The Cadaver’s original version contains all of the tension and major plot points, minus some of the gory set pieces, in the novel and ranks as one of the strongest short stories by Smith. How the author gets as much dread and mystery in to the short word count as the expanded edition is a tribute to the outlining skills of Guy N. Smith. He knows how to tell a story, regardless of format and is flexible enough to make a tale of one creepy old man perfect for a long commute or a quick trip to the bathroom. Amazing!

-tip of the hat to Funkdooby for the chapbook cover scan...be sure to head on over to guynsmith.com and check out the forum for more Smith Talk!

I'm a big fan of THE CADAVER, too, and enjoyed your write-up.

Is SMITHISMS close to publication?