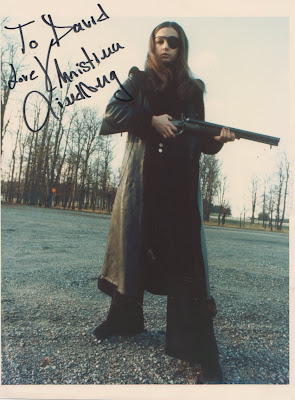 Now that I'm finally recovering from Cinema Wasteland (man...no more White Castle for me.) I figured that I had first and foremost best recount the incredibly exciting chance for some American fans to meet Christina Lindberg in a convention setting. I'll admit that I was fairly nervous to be truthful...but I also learned exactly why Christina has a high amount of posts in my personal little web-o-sphere. Standing in line with my pre-release sales book and picture (the image above) as well as the original clear boxed Sex And Fury disc that I'm so pleased with since I wrote the Lindberg Bio included was surreal to say the very least. If the footage filmed for the visit surfaces you'll see me get passed over a number of times. I'm pretty short and did not wear a shirt that mentioned a mortuary, a pungent stench or anything involving iconic skull imagery...so that helped. I did get to show off my little (really little) bag of swag at one point, but I was still waiting so I don't think I was really even in charge of speaking at that point.
Sort of sad really, but come on...cut me a break. 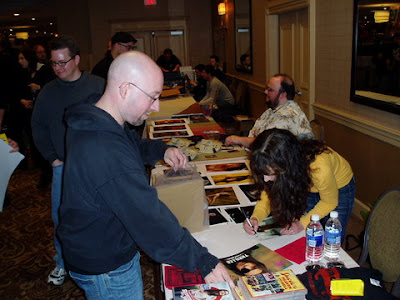 When time came I was really surprised to be greeted by a beautiful as always Christina Lindberg who was very interested in each item and did not want to devalue the sales book by signing it to me! Once we got to the Sex and Fury DVD I just had to mention that I had written that biography and we chatted a bit about that as well...it was ODD having her say thank you since it was really my pleasure to do it. Also fun was meeting Rickard from Klubb Super 8 at the same time, he seemed quite pleased with the turn out and I've been speaking to him since I became involved with the rights to the film back in 2000. It is always cool to say hello to someone like that and his boundless enthusiasm was incredible. I can see why KS8 is still running strong to say the least.
So, here is my photo with Christina. Yes, I'm blushing...
. 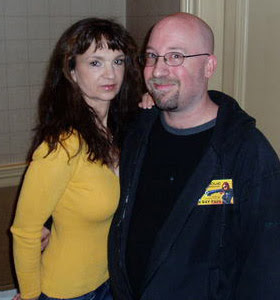 What I thought was really great was that the lady made sure to let me know that she doesn't really smile for pictures and I couldn't help but chuckle as I replied that I knew that... Why do I know that? Well, I've only seen ONE photo that she really seems to be smiling-and that is part of her mystique in my opinion.
A good friend of mine, Bob "The Videooze" Sargent sent along his copy of THIS IS CHRISTINA to have signed as well, and she was VERY interested to look at it and even remembered Bob and his magazine. If it weren't for that article, I probably wouldn't have been at this show... and there is something of a smile in this picture. 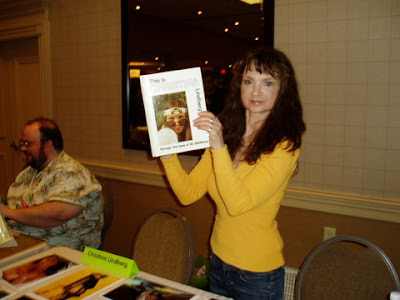 There is one more photo I'm looking forward to, a group picture of myself and my friends in Eurotrash lovin' life with La Lindberg-I'll pop it up when it arrives. At the end of the weekend I'm sure Christina was exhausted, because that is a heck of a time change and she went right at working that table and doing late night showings for the entire weekend, but she was as nice in those last moments as she was at the first. THAT is something when you compare it to some of the other guests I've encountered.

So...what was the big reveal in line you may ask? Well, if you didn't ask I'll tell you anyway. Christina Lindberg is a beautiful woman, and her question and answer sessions showed that this was not simply her surface, but a reflection of who she is. I'm hoping that that evening session is made available via Cinema Wasteland itself, because the story of a young girl raised by her mother finding her way not just in the world, but all around it, followed by her reasons for leaving the film business could do nothing but deepen my respect for her brief career and the woman herself.
The trip was a pleasure and Christina Lindberg making an appearance was a huge highlight...thanks to everyone that made it happen.
But that wasn't what I realized. Christina Lindberg and the image of her as Madeleine (or Frigga if you prefer the English dub) is burnt into my brain. I have a very strong relationship to Thriller-A Cruel Picture and the image of the heroine in a duster and toting a shotgun is not only cool and iconic, but as a character really stands out. Bo Vibenius created something that resonates stronger than most any film I've seen, and trust me friends, I've seen a lot. Madeleine goes through perhaps the worst hell possible, in graphic detail before training herself to fight back, forging a plan and executing it (pardon the pun), yet somehow remains true to herself with one final turn of the head in the finale... While Christina herself would not claim to be the greatest actress that ever lived, that image created by herself, Bo Vibenius, Ralph Lundsten and Andreas Bellis is something that stays with me as strongly as any story could.
I can relate to this in a lot of my own life oddly enough... and for some reason I'd NEVER made the connection. Not that I've ever looked amazingly cool in a duster or anything... and a pimp like Heinz Hopf has surely never chased me with a scalpel.

But it doesn't end there! You may have tuned out at this point, but Thriller became a huge part of my life for a number of years and I spent more nights and days listening to manic rumblings from all over the globe from those involved after helping bring a big cash payment over the ocean just to get the director to pony up the rights. At the end of the day, this Cinema Wasteland made me feel like it was worth it. I could grumble about the business of Thriller and the demented tale of Chrome Entertainment and Bo-Arne Vibenius all day, but nearly a decade later walking in to a room in the United States with giant THRILLER images all around was a good feeling.
No, it was great.

I kept hearing a fella by the name of Dolph calling me at my workplace and saying that we can do one film, you pick it. And I didn't hesitate to say THRILLER-A CRUEL PICTURE.
He didn't waste any time to say "What the fuck is that???"
Now we all know...

So, Christina is beautiful, I'm happy and this was one of the best weekends in my life as a film geek since the age of four.

Now check this other cool swag out!!! 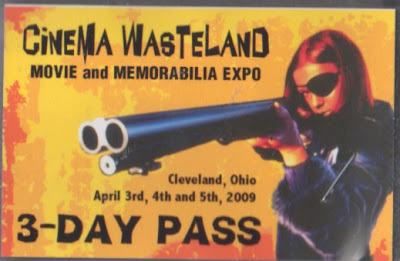 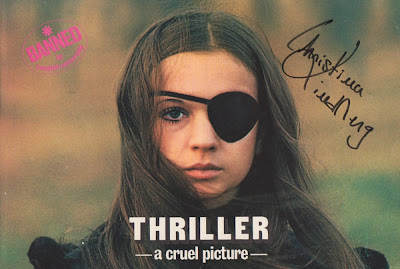 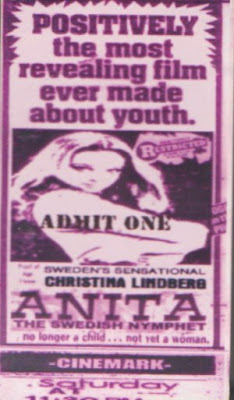 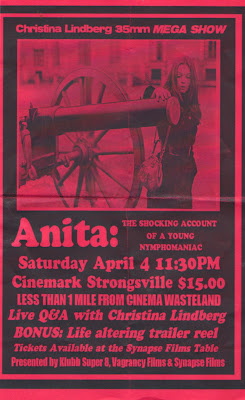 Thanks to Ken and Pam Kish for holding the coolest convention I've ever attended, Rickard at Klubb Super 8, the boys at Synapse, my Eurotrash Paradise brothers, Dave Kosanke (great meeting you), Art Ettinger, the cool dude with the camera who burst out that he has "jacked to your blog!" all the dealers that sold DVDs for 5 dollars and everyone else that I met for a fantastic time.
Posted by David A. Zuzelo at Monday, April 06, 2009

Glad you had fun Mr. Zee

I sure did, and it was a pleasure meeting you. I wish that I had your number though...I kept asking "where is Doug??"

Truly, this was awesome.

Truly an incredible weekend. I'll get some of that video footage downloaded and shipped off to you!

Amazing story, David!
And thanks for the warm words!
I think I can speak for Christina, when I say that this was indeed an amazing weekend for her as well, getting such a warm welcome from so many fans from all over USA! We talked a lot about the weekend on our way back to Sweden yesterday, and will both remember it fondly!
/Rickard (Klubb Super 8)

Wowzer, What a great event that sure sounds to have been. Very pleased for you as I know what an Incredible few days that would have been.
Mind you meeting Doug with that amazing Wizard Of Oz beard of his may have been a little freaky, if he just tapped you on the shoulder to say Hi ;) .
Looking forward to hearing even more about time spent, particularly with Christina. Welcome back buddy :) .

Still looking good at near 60!

Oh, I wish I could have been there...

Actually, the first person I spotted was Dan and it was a mutual spot. I didn't get a chance to sneak up on David. I was only there for the one day and extremely busy meeting all the people I knew there. Next time I'm there for the weekend!

That is so cool. I'm glad you had such a great time.

Thanks for the update and the Q&A post!
Truly wish I could've been there...