They Call Her One Eye-Visions Of Christina Lindberg 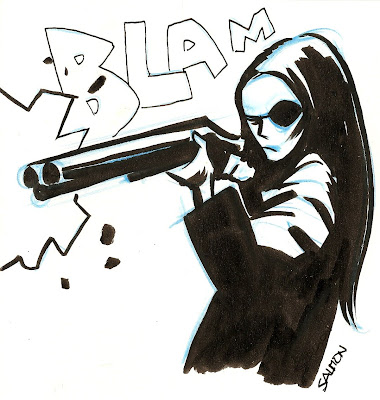 Any reader of Tomb It May Concern is probably aware of my long standing love of THRILLER-A CRUEL PICTURE / THEY CALL HER ONE EYE. So, in conversation a few months back on COMIX THAT WITNESS MADNESS I was wondering what image, or theme even, is one that you would like to see interpreted and redone. Since a few of the guys there are top rate artists it got me thinking and I realized that I'd LOVE to create a sketchbook to have my favorite artists do renditions of images from Thriller. Flash forward and my Christmas card arrives from Ade Salmon. Not only was the package loaded with some great fun (including a book that I'll be reviewing shortly) but inside the card is the above Christina image-a classic One Eye shot to say the least.
I love Ade's work and have crowed about it in the past-this one takes an image that is deeply rooted in my own personal canon of exploitation enjoyment and does exactly as I'd hoped could be done. This little sketch takes Christina and gives her the flair of the artists skill without diminishing the image in any way. Truly incredible, and I have to thank Ade one more time for it...
I'll be saving that sucker in the very first page of my Christina collection.

And lucky for me, I've got some crazy skilled pals...because then Neil Vokes (yes, Neil EAGLE Vokes as I call him, as well as Sifu) took up the challenge.
The below is the result of "putting something together" as he would say. Frankly, it blows me away and showcases Neil's style and ability to find just the right images to build up a great overall picture that captures a lot of the essence of Thriller. And again... I have to thank Neil for the amazing work. Check it out...the ultimate cover to the THEY CALL HER ONE EYE comic ;) 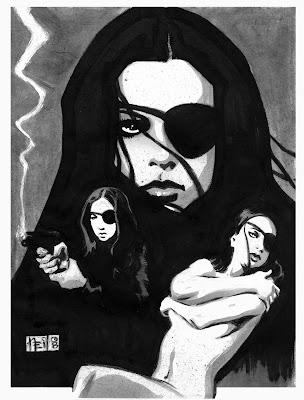 So what can be next? I'll have to put my head to finding artists that can interpret my favorite exploitation icon-a little project for 2009!
Posted by David A. Zuzelo at Wednesday, December 31, 2008

As long as I getting drawn as a cameo, I will support this ;)

It's Christina-days here by the way. The new swedish release of Journey to Japan looks great, and it's a great Christina-movie. Very different from Sex & Fury of course, more pure sexploitation.

Wouldn't you rather have a leading role in a Breaking Point adaptation? Heh...now that would be interesting!

I'm trying to locate some more artists to take on Christina in the coming year-but it will be slow. I've got one VERY large financial issue right now-a new house!

Hi! No, no english subtitles on Journey to Japan. But I like it very much!

Congratulations with the house man! It's a biiiig thing, and I doubt I will ever get one myself - to much of a coward :)

Yes indeed..a huge commitment, but I want the two kids to have a house of their own.

Me, I'm living in the shed out back, surrounded by DVDs and posters ;)

That is really cool. Wow! I loved it. Thanks for sharing that with us. Hope you have a great 2009!

Nice site you got here my man! I check back from time to time and see that your love of Christina Lindberg never dwindles for a second.

Did you know that she will be at the next Cinema Wasteland show in Cleveland Ohio on April 3, 4 and 5? It says it's her first time doing one of these. I've been to one of their expos once before and everyone is unbelievably approachable. The stars actually have a lot of slow time at their tables by the last day and you can just shoot the shit with them for as long as you like. Check it out here...

Thanks Shane, I will be flying out to Cleveland to Cinema Wasteland, and meeting friends to hang out for the weekend. I can't wait to go to my first CW show and certainly Christina Lindberg will be the highlight! See you there I hope.