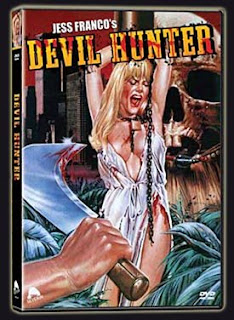 At last...after 4 (or more) cancellation attempts from Amazon.com, all that clicking and confirming paid off and DEVIL HUNTER and BLOODY MOON have arrived.
Now, I love Devil Hunter (and if anyone can show me a real piece of promo art that says Mandingo Manhunter I'd be really in debt to them). It is not good, it is barely a "Franco" feeling flick at all. But, there are some great shots and lines. In many ways it reminds me more of the Italian action films covered in Tough To Kill-especially the scenes with Werner Pochath.

So, I'm thrilled-and Severin does the usual bang up job with a great Jess Franco interview (does the man do bad ones?) But amidst all that ping pong eyeballed breathing, breast shaking, face slapping and voodoo dancin' something was bothering me. It was REALLY distracting until I suddenly realized that while the print looked very stable, it was almost drained of color. Devil Hunter is not this drab, unless you are trying to cover up the random white guys pretending to be native drummers-something just doesn't look right.

Now, before you jump me for hating on a great label releasing a marginal film, I am incredibly grateful that this was licensed. There was NO way I'd miss out on owning this title in a zillion years. I buy all these with my cash-no freebies for me. But, it just looks wrong for most of the print. Maybe Jess wanted to hide the actual film, but it never looked this way and I'm having a tough time adjusting. Mind you, I'm no Franco "scholar" by any stretch. I'm a fan and a BIG fan of this film. It is worth your money, hands down, just to experience the film. But Franco fans that have a soft spot for this one should know they are getting something really different.

Here are a few comparisons. They aren't exact frames, but close and you'll see the difference right away. The top is taken from the way out of print "Blood Edition" from Germany. That has no English (see, I'm obsessive...but not a scholar), but it makes a decent comparison. I don't really need to go and pull out my old VHS, which had a better picture than the German DVD and is probably even MORE jarring.

On the other hand, you still get that classic scene with Al Cliver I always call "it's what I do." Worth every penny. Plus, it is longer than I remembered other editions being-you know you need it! 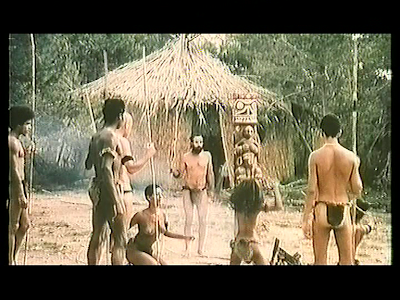 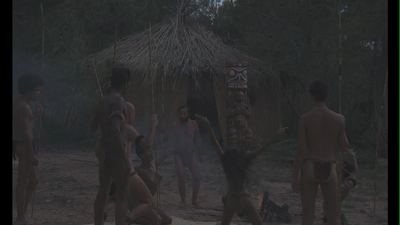 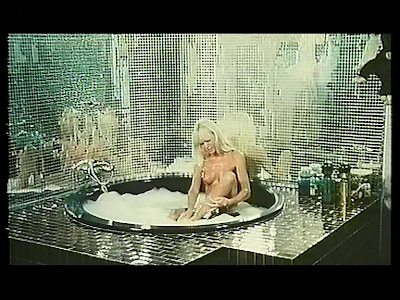 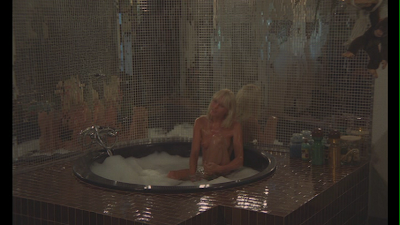 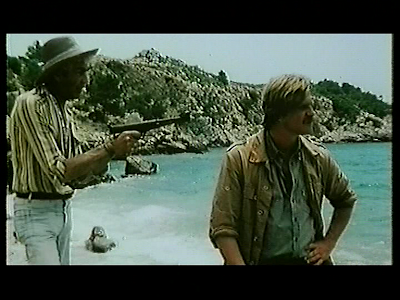 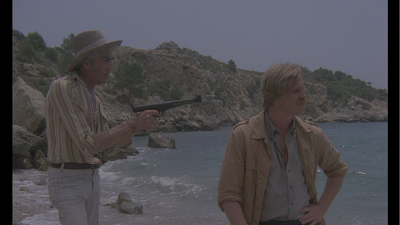 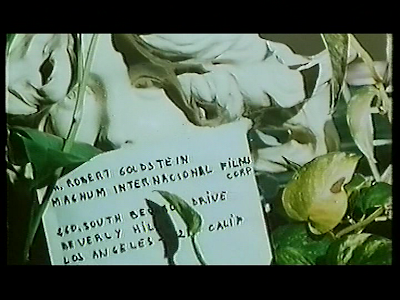 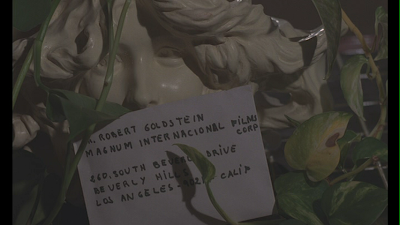 UPDATE
Maybe it is just my eyes... the last sentences of each review I found are all really pleased. I don't know, I must be nuts. The shooting conditions must have changed for this exact print of the film. I do have a theory though. If this print is put together form multiple sources, perhaps
grading them all severely puts them all on equal footing. This would reduce varying brightness levels from print to print I guess. BUT...I just can't believe that anyone thinks that Franco is THAT inept that he can't shoot the sunlight.

Smoking vaginas? Sure. Tongue Toilet Paper (you know the line by now Trashers)? For sure.

The ability to shoot SUNLIGHT. CAN YOU NOT SEE THE SUN IN THE JUNGLE??
Come on...we know he can do this.

DVD TALK:
Video:
A 1.85:1 ratio widescreen transfer looks pretty fabulous considering the age and station of this reeker. During the credits sequence some titles are slightly cropped at the bottom, so it looks like this isn't anamorphic, but by a certain standard the greater percentage of image lost the better. Compression artifacts don't pose a problem, but with a photographic ethos seemingly based on making everything out-of-focus, it's sort of hard to tell. Colors are nicely rendered, but Franco also seems to have chosen to shoot tons of footage in the shadows at twilight, so much of the film seems gray, lifeless and shadowy. It's a perfect fit!

AV Maniacs
The 1.85/16x9 transfer isn't quite as lovely as the transfer for Bloody Moon, but this is the fault of the film's sun-bleached cinematography. Beyond the shortcomings of the photography, the
transfer is handsomely authored - good, strong detail and color, with only some minor print damage in evidence. Some shots look out of focus, but this, too, is a fault of the photography, not the mastering. Compared to the hideous public domain editions floating about, the Severin transfer looks like a million bucks.

I'm In A Jess Franco State Of Mind (that really nails the actual film very well, give it a read)


This is an interesting, luminous transfer of vault elements which sometimes is a bit soft, almost fogged, but that looks due to shooting conditions as much of his film seems to have been shot out of focus. That's not unusual in a Franco production (cf FEMALE VAMPIRE) but the
POV shots of the cannibal are obviously deliberately either unfocused or filtered with something and the non POV shots of the cannibal's encounters with various human meals are also fogged. For me it just adds to the sense of jungle delirium and sex-gore transgression.
Purists may be less forgiving. In terms of color it certainly looks better than ever before.

The source materials used for Severin Film's transfer are in great shape with nicely saturated colors and healthy looking flesh tones. There are some minor instances were the transfer looks a tad too soft. This is during the darker/nighttime scenes. Even though this transfer is interlaced the image remains stable throughout. There is no blurring or ghosting issues during playback. There are two previous DVD releases of The Devil Hunter that I know of. The now OOP German
DVD release from Laser Paradise (which only came with a German audio option) and the region 1 abomination from Videoasia that looked like it was ripped from a VHS source. By far and away Severin Film's transfer is the best this film has ever looked on home video.

My Severin disc doesn't look like this at all. Let me double check and
i'll get back to you.

Cool...it played this way on my PC and my two stand alone players. Grab a few frames and lets see if there is a defective run.

David, I don't think it's a color problem so much with the new DVD. Look at the color in your top grabs, it's just a greenish tint, some browns and a badly graded cropped image. The Severin is superior in every way. Realistic flesh tones are the most reliable hue indicator, and the flesh tones ar right on in the Severin. I think that it's a LUMINOSITY issue in that say the opening shots of the jungle foilage are bursting with color but other scenes seem washed out in comparison, they seem to be from a different source print. All came from vault materials of the owner, not from Franco. And the film is not well resourced in terms of fill-lighting reflectors which you use to shoot the natural light into dark areas. I have all the DVD versions and video versions ever of this and the SEVERIN will be my one of choice.

Hi Robert, I agree-it is luminosity, I was just keeping things simple. On the majority of the transfer this is a problem for me. Interestingly, if you pop in to the point when good old ping pong goes on the boat and pulls the head twisting death the print looks much much better. There is one shot of the Manhunter carrying Ursula Buchfellner where she actually appears blonde, bright blonde. Once the luminosity issues pop up again she doesn't look that way at all.

I'm certainly not pointing the finger saying that Severin made any error, but that tint really makes the movie look bad in my opinion. I'll take bright blonde hair in my jungle epic-and when it is going on it makes the daytime scenes look bizarre to me. Almost like everything is being graded Day For Night-except it is constant. I noticed this most of all in the Buchfellner bathtub kidnapping.

And I certainly don't blame Franco for any transfer, I doubt he holds elements to anything-he just makes movies I really enjoy. When I read reviews that say the following I get really upset.

"but Franco also seems to have chosen to shoot tons of footage in the shadows at twilight, so much of the film seems gray, lifeless and shadowy. It's a perfect fit!"

The movie does not look that lifeless without the tint.
We've both been Franco fans a long time, and I know that Jess having things like this fobbed on his filmography because of transfers is one of my pet peeves. Always has been.

Thanks for popping in, I always appreciate the conversation!

David, the very first opening shots are very colorful and I was surprised at them. Some of your screengrabs look much darker than anything on my playback. I have some screengrabs on my cinemadrome site on the DEVIL HUNTER review thread. Come over and see if they look like what you are seeing and leave me your feedback. I know that if you pump up contrast it does affect the color and vice versa.

I got my review copy of Devil Hunter this week and mine looks exactly like yours. In other words, horrible! This could have been easily fixed by Severin, because it does need fixing, I don't care what anybody else says.

To me it seems like something that could very easily be fixed. I can fix it in 2 seconds in Photoshop by adjusting brightness & contrast, and I'm sure Severin's DVD mastering software has similar capabilities as well.

The problem last for the whole duration of the film too. Minor shots that look like they should (colorfull!) are the exeption. I don't understand how so few people notice this problem.