Reuniting with an OBSESSION for Jess Franco 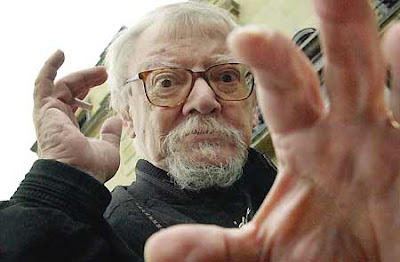 I've been a Jess Franco fan for quite some time. While I was certainly made a fan of Eurotrash Cinema by such authors/publishers as Craig Ledbetter, Tim Paxton, Bob Sargent and Tim Lucas it did take me a while to get started with the rather large-and labyrinthine-filmography of Franco. I devoured up Argento (truly the gateway to Eurohorror in my opinion), massacred a huge list of Fulci titles (and even had my first written zine article in Deep Red Alert on his work) and started my quest to see all of the Eurohorror films I could find.

Still working on that last one.

If I had to blame one guy it would be Tim Paxton with his Monster! (International) zine... he just has a great writing style that invited the reader along for a demented ride through this directors array of movies. Hey, even when he did NOT like something it sure did sound interesting-and if it sounds interesting I need to see it. You can still read Kiss Me, Monster from Monster! International #2 here.

But it was certainly a big banner day when Video Watchdog #1 landed in my mailbox and the great Franco article within set me on a path of no return. I've lost lots of brain cells, plenty of time and money along the way for sure, but it is all worth it. Because yes, I have Jess.
Sure, I had seen Tim Lucas' name and Franco reviews in Monster! and I'm pretty sure that he wrote the "Maciste" film reviews for European Trash Cinema as well. And yep, I'd seen the three part article in Fangoria and some of the earlier writings are STILL hanging around on AOL by clicking through here and looking at Tim Paxton's still stored Jess Franco site, or the Monster! International archive. Sure, the updates are 11 years old, but still fun reading.

All that just sets the stage for what I'm actually going to do in this post, but for the first time in ages it feels as if I'm really "blogging" instead of sharing my various obsessions-so forgive me if you will.
I was recently at a surprise party (for my 40th birthday) at Neil Vokes' home and while going through the Sifu Library I noted a copy of Obsession-The Films Of Jess Franco. My jealousy was probably a palpable force right then. I thought no more of it until later on a conversation popped up about his willingness to part with the book! What??
Luckily, it has arrived at my home and yet again I feel nothing but gratitude. I had this volume when it was published and it was my bible for getting started. The names Balbo, Blumenstock, Kessler and Lucas were the new monikers for the Four Horsemen Of My Cinematic Apocalypse. I jotted notes inside my copy-collectible or not, this copy was mine. I viewed films and sketched little notes out about things I saw, agreed and disagreed with in the text. But sadly, this book was a gift and she who giveth can taketh away in an instant.
Ladies...if for some reason you ever have the desire to take anything from me I would appreciate the following. Ask me for the money to register davidzhasasmalltallywacker.com and I'll give it to you. Do NOT take this copy of Obsession.

So, after nearly 11 years without this great tome (and it is great by the way), I opened it and realized that I had memorized lots of the information within. I knew within three page turns just where the unseen shot from the climax of Lorna The Exorcist was! But something else became apparent. I've experienced a lot of Jess Franco in the last decade, both thanks to the fact that he is something of a cottage industry on DVD and that I have been trying to keep up by investigating items like Lake Of Virgins and the other obscuriosities.

So, this got me to thinking about the current state of Jess Franco reference... There have been some great chapters (Immoral Tales by Pete Tombs and Cathal Tohill springs to mind), and there is certainly a lot of Franco thoughts online. Sometimes I get a little caught up in discounting online reviews due to the fact that I find a lot of them tend to applaud the various companies that produce the discs while marginalizing the actual films in favor of discussing all the cool extras the discs come with. I still go back to my copies of older reviews, when corporate consideration was less (or no) distraction. And now the four horsemen ride again on my wall.

As I placed the book on the shelf I realized that I had three hardcover, expensive, books on Jess Franco now. THREE!! For a guy that spent most of his cinematic career being called a hack by the masses, and that is a kind term, he sure does have a lot of words and images dedicated to him. I have those three books here and just wanted to share a few thoughts on each. 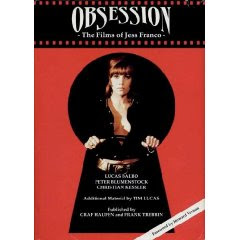 Certainly the best filmography in English, and easily the best volume of the three. The articles are excellent and still timely, most especially the tribute to Soledad Miranda by Tim Lucas as well as interviews with Howard Vernon and Erwin Dietrich among others. The Franco interview is incredibly entertaining also.
For the record, I believe that Tim Lucas' introduction and categories for Franco periods really changed the perception of Franco and his work. A great document-it is fun for every fan of the director to read and appreciate. And as with all good pieces of writing it makes me want to explore more deeply the subject and start to create my own subheadings.
However, it is the filmography that will keep readers motivated to explore every nook of the Franco library. While it has been a decade and lots of new information is available, the book manages to neatly cover the complete works of Franco in a very concise manner. Something I could not appreciate years ago was that the actual lack of critiques for all the films turned out to be very helpful for me. Instead of telling me what was "good" or "bad" for each film, a number of details about common themes and personnel details create a nice unifying field for enjoying the wide angle view of Franco's output.
And this is why the book holds up very well.
The illustrations in the book are black and white and well selected. Shockingly, some shots are so great I remembered them as being in color-especially that Lorna image.
Expensive and hard to find, this is also essential for Franco fans. One day perhaps the four horsemen shall ride towards an update.
Ah, and this book inspired me on one of my biggest writing challenges-when I viewed all of Franco's ONE SHOT films in hope of creating a new category that Obsession could not have seen coming. In looking for a link to that article I realized it is buried in popups on my old site. You can see it there however, and I should go back and save it... I will do that in the near future.
I think it could use some updating and a new coat of paint as well. 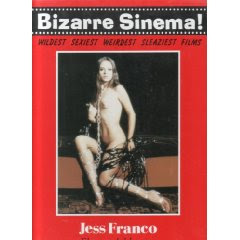 This volume from Glittering Images is a beauty, as is most anything else they have put out. Interestingly enough the text is written by Carlos Aguilar, who contributed a tribute to Franco in Obsession. The images are presented in black and white as well as color and the choices and reproduction are excellent. Lobby cards, posters and other images all come together with a good filmography and a very welcome bibliography of writings about Franco. If I had any issue at all with this book it would be with Aguilar's opinions more than any facts. He has a deep love for the earlier Franco films, seeming to top off right at the point that Soledad Miranda passed away. He does a fantastic job in summarizing why these films are so interesting and in many cases, fun. But once Lina Romay comes on the scene, things take a turn that I just can't agree with. And there is the fun of being a Franco fan. I don't think he is wrong, but I can't go along with his dismissal of Franco once Lina Romay comes in to the films at all.
I'm a big Lina fan, what can I say. Perhaps it is the fact that the book is in multiple languages and there are translation issues, but once Lina Romay is referred to as "primitive" I guess we parted ways. I've gone back to this volume many many times actually, and as with Obsession I'm finding that reading the later parts of this book is fascinating. We don't agree on lots of things, but each time I disagree with the author it makes me look at what I do find interesting about Jess Franco. A very worthy book for any Franco fan for the sheer bulk of images and that bibliography makes my head swim with the thought of finding "one more" of these old magazines. 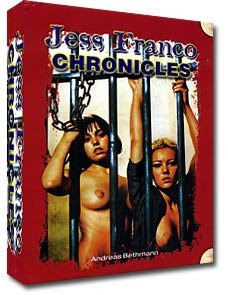 First things first, I don't speak or read German, so the text is useless to me. Written and created by the wonderfully notorious Andreas Bethmann, you may doubt his information (well...there are images and films credited to Franco here that don't appear to be correct)-but we know he is a Franco fan. Jess and Lina have appeared in his films and his label X-Rated Kult Video has released a large number of Franco films. As a picture book, this may be my favorite of the trio. The glossy paper combined with what is most likely Bethmann's large collection of Franco ephemera is just plain awesome. Sure the bordering choices can be funky, but for fans of the later Franco films-and the ones that Bethmann released on DVD-there are lots of cool items. Also, there is a nice German poster for Blue Rita that makes my mouth water. VERY expensive and not a must have unless you are insane for images from Franco films and the promotional materials they generated. I would love to get a translation of the Katja Bienert interview. She has also worked with Bethmann in his films, and her story is certainly interesting.

My shelf is complete with my Franco hardcovers...now I just need to start digging through all my magazines and poster piles to index all MY stuff sometime. I did learn something the moment that this book landed on my doorstep after a major absence in my life. Obsession is perhaps the best titled book of all time...
I'm a happy happy man to have it.
Posted by David A. Zuzelo at Tuesday, August 05, 2008