Hey everyone...I have to say that I've been on vacation and had bad things happen. This was NOT one of those times. However, I can't help but think of the year that I left for the shore and my boss sold the business I was working (very hard) at while I was gone today. Because one of my favorite stops on the web is going away and though I'm sure the time is right, I can't help but be a tad bummed out.
Xploited Cinema is moving on... read more here and then come back.

I've known Tony for some years-back when I worked for Sight and Sound and Playback Trading I was always happy to have some professional dealings with him, but it was his knowledge mixed with the way he ran Xploited that made them the ONLY place I wanted to buy my import DVDs.
Even when I worked for a DVD Importer! My boss was probably pissed, but Tony had better prices...I'm hoping for the best for Tony and his merry band of Xploited Cinemaniacs and one day we will have to share some beers (maybe Cinema Wasteland in '09 will work) and have a few laughs. Hell, if not for Xploited I wouldn't have big scads of German Backyard Gore, nearly all of the Jess Franco titles he has imported (and there are LOTS), some groovy tunes and even finding another fan of Al Brescia's AMAZONS AND SUPERMEN was a big thrill. Also, the surprisingly great experience I had selling the Ascension Of The Blind Dead chapbook is highlighted by having WAY too much fun including an Xploited ad just because I hoped it would steer some readers from Shocklines his way. I'm still damn fond of that ad...I'll see if I can find it in my files.

And Tony... I actually now OWN a Japanese LD of that film! We should put the two together and make the largest LD library of Al Brescia peplum ever created.

I'll miss my thrice daily trips to the ever familiar Xploited Webshop, but I'll always have the amazing discs (including some Italian DVDs of Lamberto Bava films that he kindly grabbed for me!) to watch. Thanks for all the amazing service and incredible selection of DVDs over the years-I appreciate it and wouldn't be NEARLY as insane about my hobby if I didn't have Xploited to thank (or blame ;)

So, go and BUY all that swag you have been holding off on. I have a want list longer than my arm sitting in a notebook-time to get cracking on it. Just the books section could break me, and then there are all those Spaghetti Westerns, Peplums and wait...one more Jess Franco film.

And hey...I found the Ad from ASCENSION OF THE BLIND DEAD. Yep, I love this one. 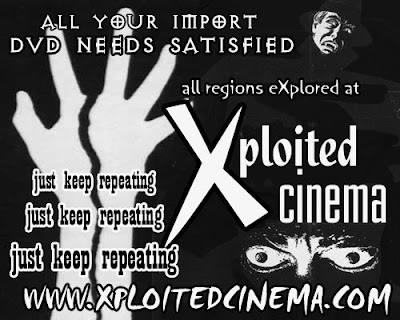 X-PLOITED is my homepage and I nearly fainted when I first read the news.
And I think I know exactly what you mean when you link them to your own collecting insanity. Between them and the recently departed Shocking Videos, I've been able to stay rabid for nearly a decade, myself.

Mr. Simonelli and crew are good people, and I wish them all the best.

A crying shame that Xploited are calling it a day. Very rare to find a company that cares about its customers. Great blog btw.

Thanks Steve and I totally agree. Without Tony and the Xploited Crew providing the service I have no idea where I'll get my fix of German DVD imports and the like. I can say this, I'd LOVE to polish off all the items on my wish list. ALL THREE PAGES OF IT. Yeesh.

I'm hoping to catch up with Tony sometime while we visit family out in Cleveland.