Friday Nights give me a Hard Sensation! 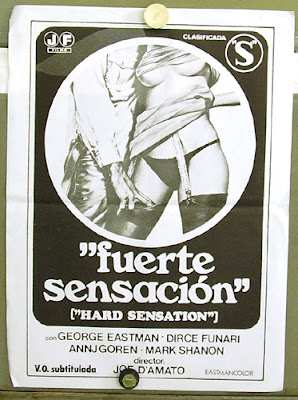 There are still so many films I want to see. No matter how many I watch, there are times when I look at my wish list and think I better start watching these films faster!  I'm also a big fan of Joe D'Amato, a true hacks hack, who made some trash and sleaze and would never look back.  That filmography is loaded with odd titles and seems insurmountable, but this week I finally got to check back in with the crew on THAT ISLAND where the living dead roam, lesbians moan and words like "esotic" get thrown.
Hard Sensation.
In English.
George Eastman... porn.  BooYah. 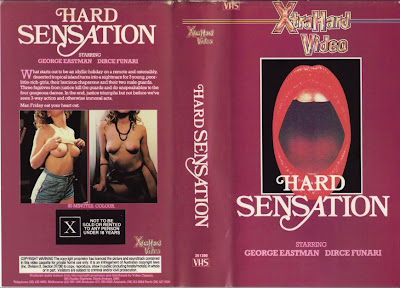 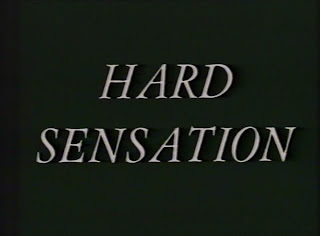 It seems like a good idea to Professor Jacquard (yeah, read that out loud...JackHard) to have his sexy daughter and her friends enjoy summer vacation together. But when a situation arises and a trip to Paris reverse cowgirls, he realizes with a stiff upper lip that he will have to send the young ladies to an island paradise with a few local guys.  Parenting tip #1.  If your daughter is Dirce Funari and she has a friend that is best known for performing the oral scene in Eva Man named Annj Goren, then this is not a good idea.  Well, actually-I'm all for it. Because luckily he decides to send the sexy teacher, the ever fun to watch Lucia Ramirez, along to keep them out of trouble.
They will be using their tongues, but language lessons will be far off in her care!


The two locals charged to keep an eye on them may stare and ogle, but they stay true to the "all looky no nooky" rule pretty well.  And then...ANTHROPOPHAGUS arrives on the scene.  Well, it is jumbo George Eastman, minus any cannibalistic urges, though he certainly will get his beard dirty with some juices or another.  He won't go all...the...way though, because mighty MARK SHANNON is here to bring the Hard Sensation all day and night as BOBO!  Yes, the main scumbag is named BOBO.  And he says this.
"Nobody makes a monkey outta Bobo and gets away with it."
This is fucking brilliant!!!


The D'Amato porn films in the early 80s waver between being a mangy lot of fluid soaked shenanigans and representing some of the most interesting and Eurostar laden entries in his filmography.  Sure Joltin' Joe would become Juicy Joe later in his career, winning AVN awards and all, but these films, especially the island ones, are true European TRASH Cinema.  Hard Sensation has a good group on both sides of the ball(s) as well.  George Eastman puts as much in to his work here as ever, you have to like the big ape as he tries to save the girls.  Mark Shannon is there to provide all the stick work, and those of you that have enjoyed his work in a digital format will be (dis)pleased to know that a certain large...growth...is still there.  Shannon is also a good actor in my opinion, and his portrayal of Bobo would be just fine in any Eurocrime film.  Plus, the guy has no problems doing whatever he is asked.  And then you have the ladies.  Annj Goren!  Dirce Funari!!  Need I say more?  Well, I'm pretty intrigued by Lucia Ramirez myself, she isn't in a lot of films, but has a unique look and is also the primary sex player when she shows up.


Get stiff and pound yourself into a chair with HARD SENSATION-the choice of the week for European UltraTrash!
Posted by David A. Zuzelo at Friday, November 19, 2010

Has someone ever bothered to make a list containing every Italian post 1970 [sleaze/B/cult] movie that DIDN'T feature a couple of J&B bottles?